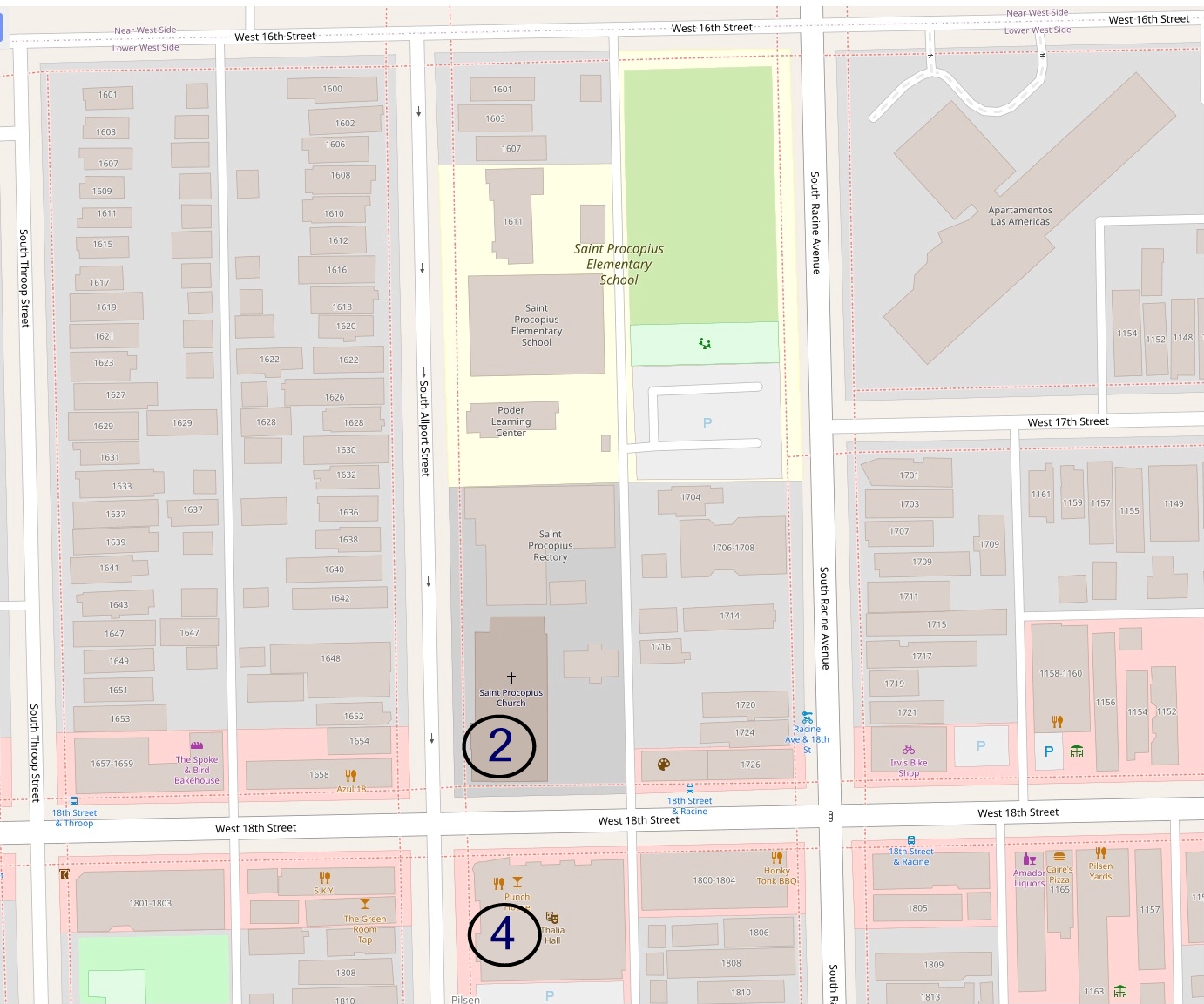 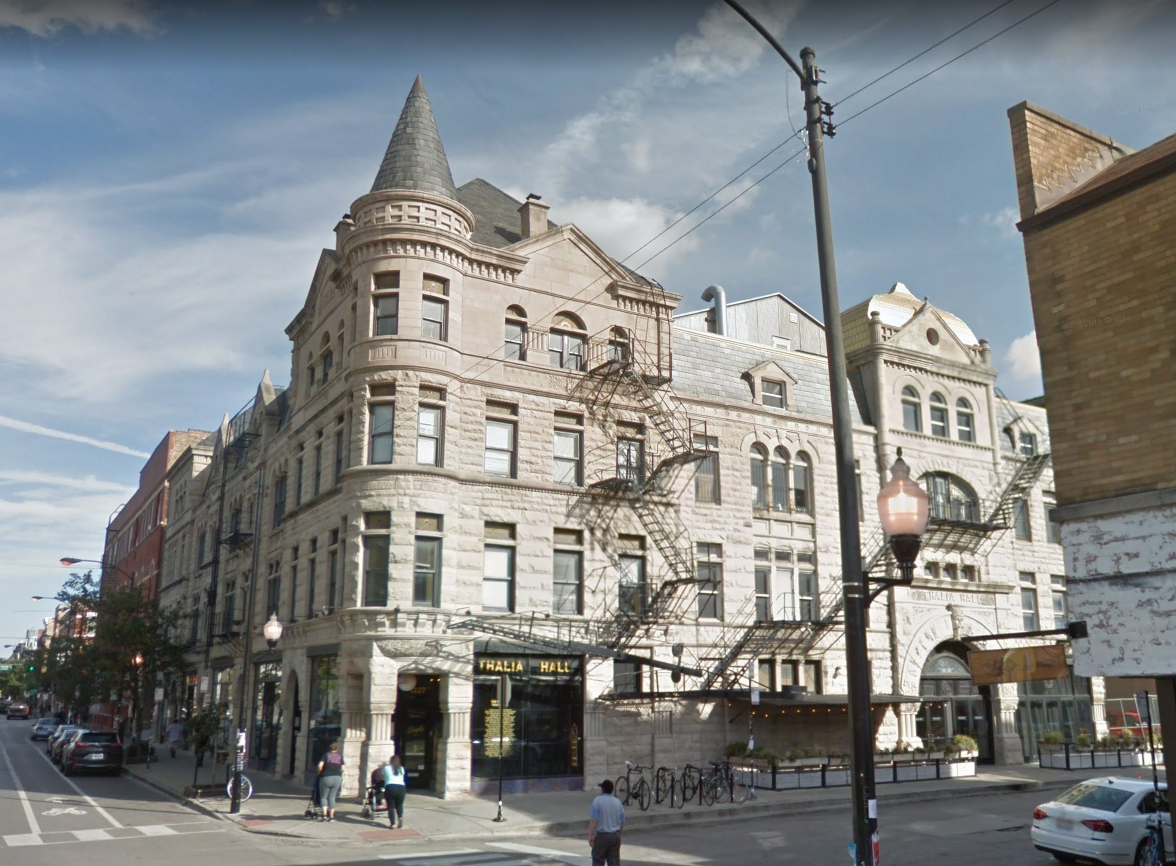 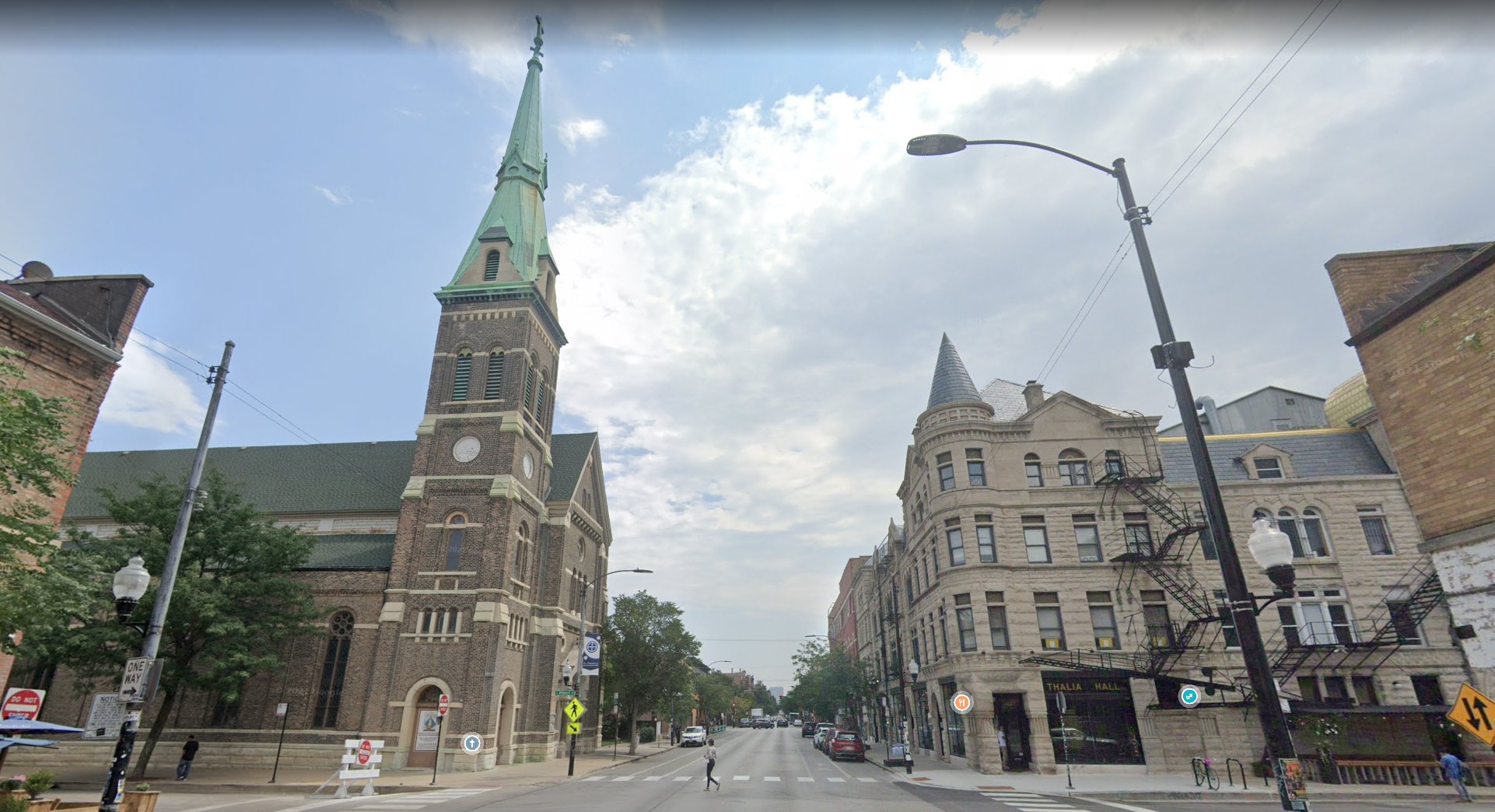 Thalia Hall, at the corner of Eighteenth street and Allport, is located within Chicago's Historic Pilsen district.  Perhaps in keeping with the area's growth as a thriving center of Bohemian settlement, and business, Thalia Hall was built by John Dusek using an architectural style which reflected his home country and the city of Prague in particular.

This saloon keeper had a dream.  John Dusek was a religious man.  He was a member of St. Procopius societies.  He was a business man.  He worked to develop a place for Bohemians to meet, to have social events, and enjoy different facets of Bohemian culture.  That plan began in 1892 when he

undertook the development of Thalia Hall.  The building opened its doors in 1893 and was an active location for numerous Bohemian and other events in the Pilsen district.  In 1900, Thalia Hall was also the location where, while in Chicago campaigning for President, William Jennings Bryan used for a campaign stop and speech.

Below are newspaper clippings describing the numerous and varied uses for Thalia Hall in its early years of operation. 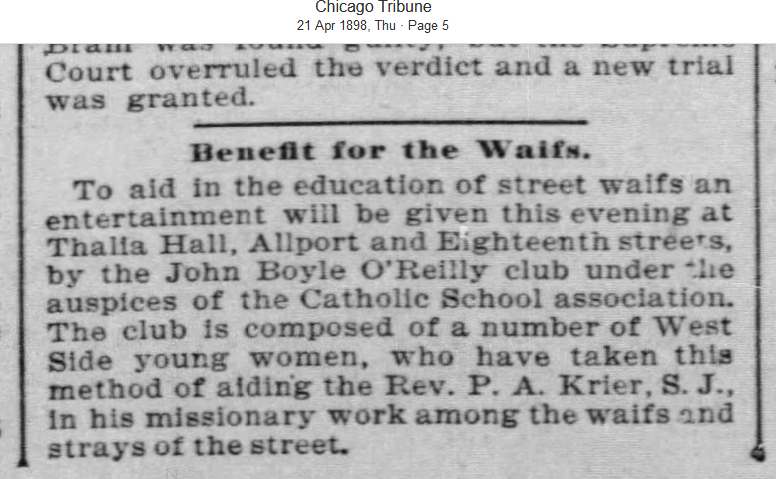 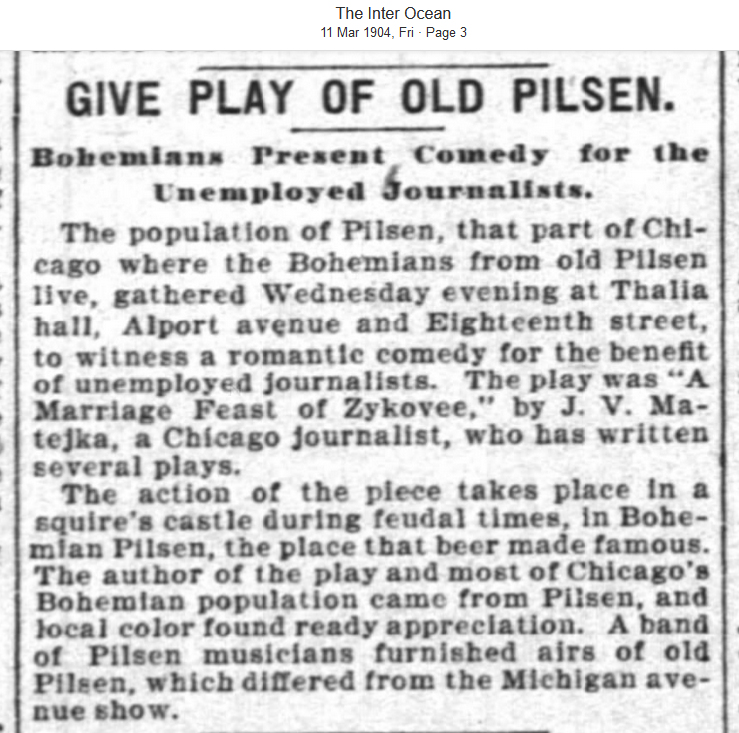 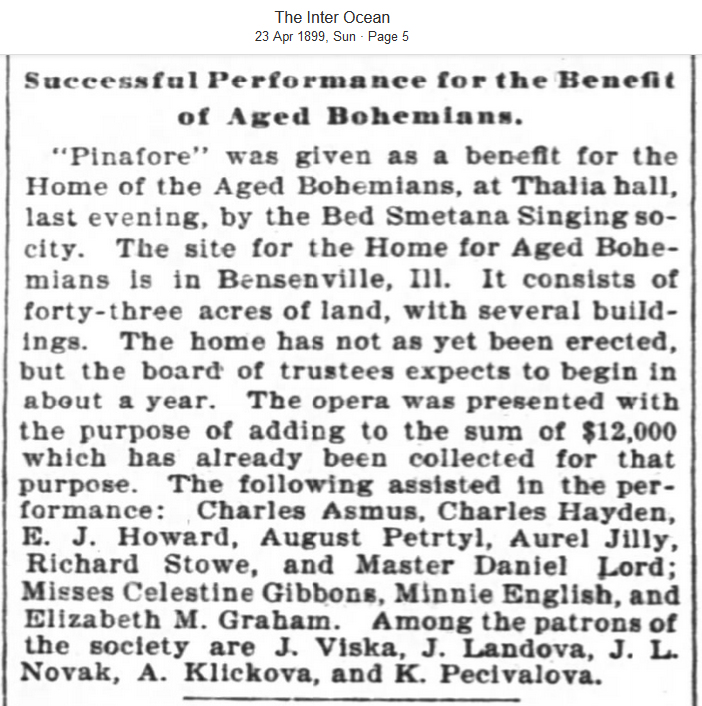 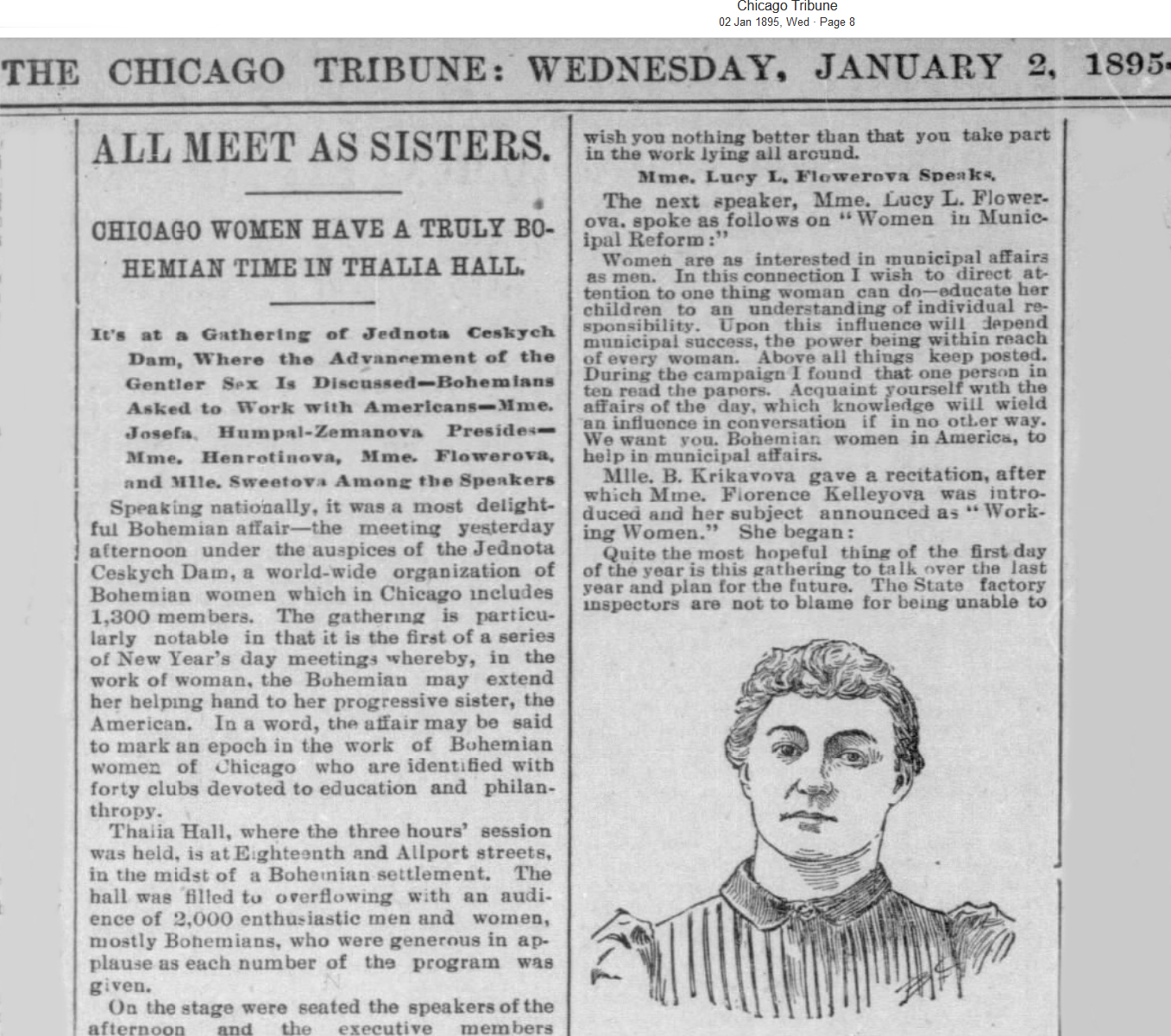 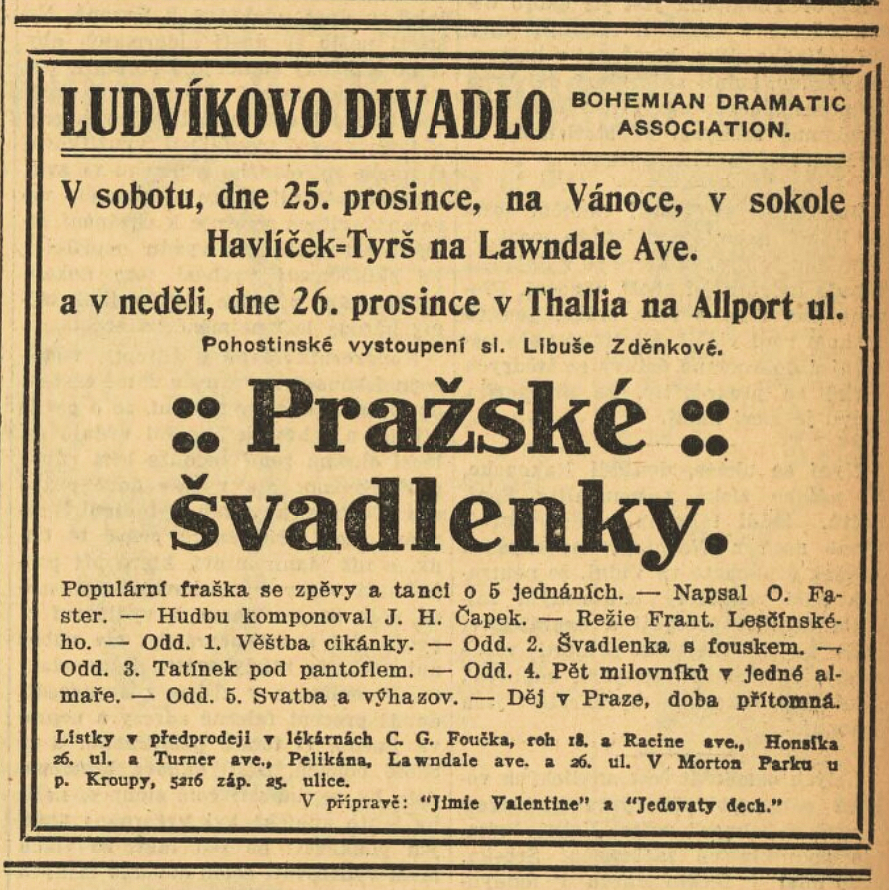 Musical performances and plays would at times fill the Thalia Hall auditorium to capacity.

Many of the performers came from Bohemia. Some stayed here for most of their career.  Jan Karel Splavec and his wife Otilie were such an example.  Once here, Chicago became their home, and they performed at Thalia Hall. 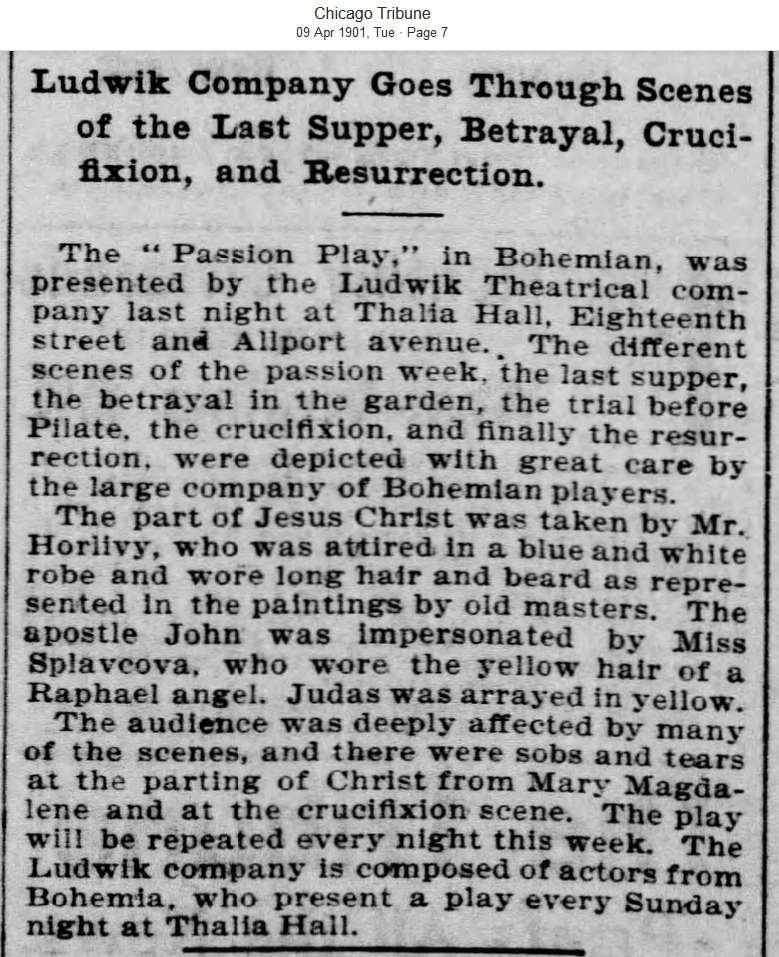 Events, meetings, musicals, plays, political and social group activities seemed to fill Thalia Hall and the newspapers, but it does not appear to have brought economic success to John Dusek.

Thalia Hall went into foreclosure, and was purchased, for a much lower price than the original building cost, in 1902 by Thomas R. Lyon.

That did not mean Thalia Hall closed, as many of the same activities would continue after the sale to the new owner.

The Foreign Language Press Survey holds the works of many, who during the depression, were hired to translate and categorize news from foreign language papers (in the USA) to English.  They are available online through the Newberry Library.  Below is one example of the many stories there related to Thalia Hall after its sale to a new owner.

"The popular singer and actress, Miss Libuse (Libby) Zdenkova had her day of honor in the Thalia theatre last night. Large crowds came to testify to their esteem for the young artiste, and to show their appreciation of the many patriotic services rendered by her to our cause. The hall was filled to its capacity, and many had to be turned away.

There was a burlesque on the program, "Reservistka" (The Girl Reservist), in which the songs gave Miss Zdenkova ample opportunity to display her manifold artistic virtues in the role of a newlywed, who follows her husband into the reserve maneuvers, and to this end dons the uniform, all this because she has doubts about his faithfulness. For this part, Miss Zdenkova brought out not only her exquisite and well trained soprano, but also a suitable sample of her surplus of temperament. The role simply seemed cut out for her especially. The other players proved excellent partners. The burlesque will be repeated next Sunday."  (View a PDF file with many similar stories)

Thalia Hall eventually would close, and nearly be abandoned by the 1960s.  In 1985 Thalia Hall became a Chicago Historical Landmark, but that was not enough to generate interest in the property until 2003, with renovations beginning after that. 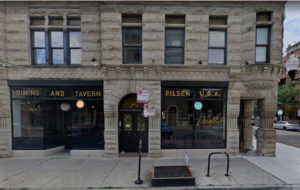 The building was purchased and over the course of years has undergone a transformation.  The auditorium is now used for concerts.  An Italian restaurant was added shortly after reopening, but today, that restaurant was replaced by "Duseks", but while bringing back the name, it does not serve Bohemian food.  Other stores have also moved into the building.

Thallia Hall - Currently a music venue - This is its about page - https://www.thaliahallchicago.com/history