In a 1922 court case involving the estate of Otto Kubin, information was provided on the creation of the Bohemian Brewing Company in 1891 in Chicago.

"The record discloses that in 1891, Charles J. Vopicka, Otto Kubin and John Kralovec, who were brothers-in-law, together with a few other persons, organized the Bohemian Brewing Company of Chicago, which name was soon after changed to the Atlas Brewing Company, with a capital of $150,000 consisting of 1,500 shares at $100 per share. The principal stockholders and the number of shares held by each were: Vopicka, 415; Kubin, 415; Kralovec, 345; Mrs. Jonas, 100; John Geringer, 50; James Storkan, 25. The remaining 150 shares were held by a few relatives and employees." (1)

Below: Summary information found on the original investors in the Bohemian Brewing Company

Born in 1857, village near Prague.  Arrived in USA by 1880, spending some time in Racine and Milwaukee.  1881 in Chicago.  1881 Vopicka and Kubin real estate and banking until 1889.  Bohemian and Atlas Brewing.  4 years director of Kaspar State Bank.  1913 Pres Wilson appointed Vopicka as Envoy to Rumania, Serbia and Bulgaria.  1883 he married Victoria Kubin, sister to Otto Kubin, also a founder of Bohemian (then Atlas) Brewing Company. 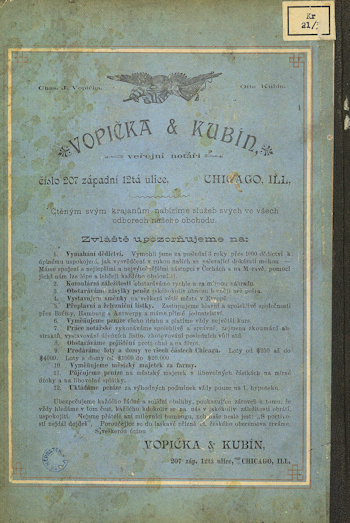 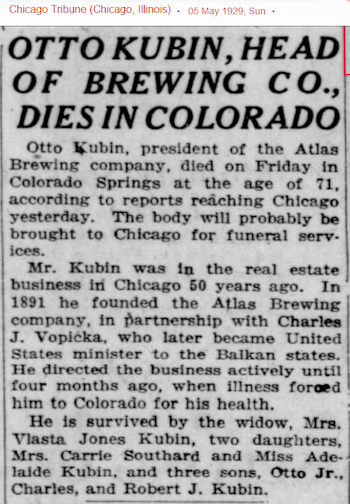 Article from the Foreign Language Press Survey based on article in Czechoslovak Review (no date provided).

" The year 1880 finds young Vopicka in the United States. After spending a

About this time he organized the Atlas Brewing Company of Chicago and became its President and Manager. For four years he served as a director of the Kaspar State Bank, Chicago, and from 1909 until 1913 he was a member of the Illinois Manufacturers' Association. " 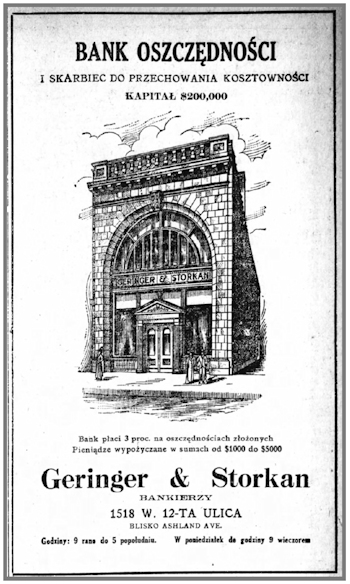 Born in 1871 in Chicago.  Storkan was licensed to practice law in 1893.  In 1894 he entered into a partnership, with John Geringer, in the real estate loan and private banking business.    Founded 1898 insurance and mortgage business, later became a state bank, Geringer and Storkan.  Retired in 1933. Oldest surviving member of original stockholders of Bohemian Brewing / Atlas Brewing Company.  Married Marie Emilie Kralovec in 1894, daughter of John and Julia Kubin Kralovec. 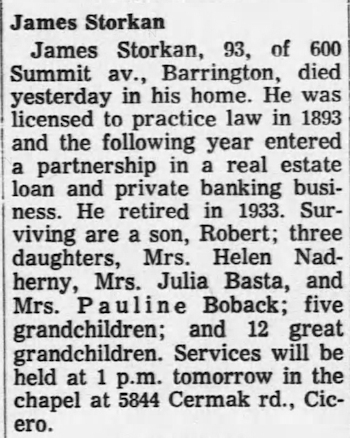 Early newspaper announcements for the opening of the Bohemian Brewing Company 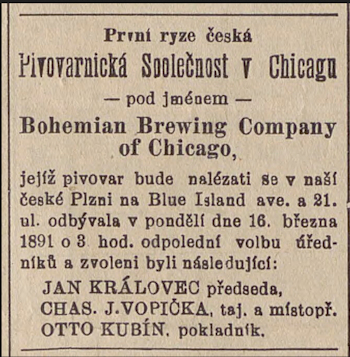 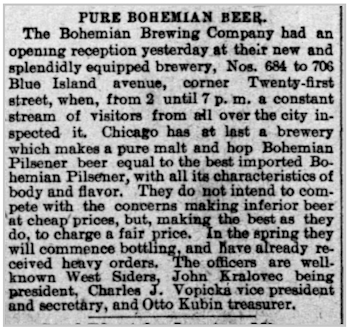 John Kralovec was born in 1849 in Nevolice, Bohemia.  Arriving here, he began work in Chicago in construction and with his brother James would form their own construction company. “John Kralovec and Brother” in 1883.  By 1890 John became interested in real estate.  John Kralovec married Julia Kubin, daughter of Martin Kubin in 1873.  Otto Kubin was her brother.  Sister Mary married John Geringer.  Sister Victoria married Charles Vopicka. 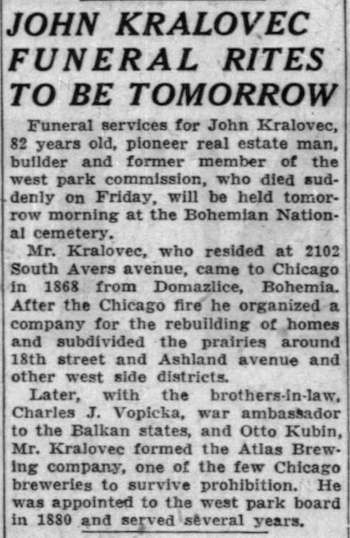 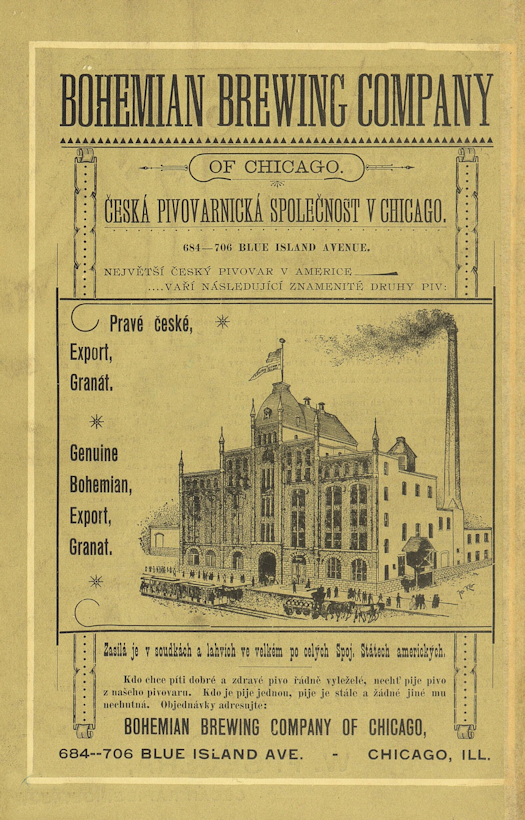 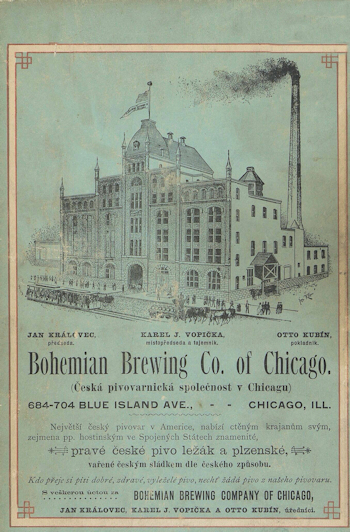 The Friends of Bohemian National Cemetery have a good article related to John Kralovec.

Chicago Newspaper - The Inter Ocean January 1, 1902, Page 16:  Atlas Brewing Company. Few of the Chicago breweries have had such prosperous year as- the Atlas Brewing company of 680 to 706 Blue Island avenue, which under the capable administration of President Charles J. Vopicka increased its output to such a gratifying extent that the management was compelled to increase its storage capacity considerably.

Otto Kubin. secretary and treasurer of the Atlas Brewing Company, reports an increased demand for the firm's product 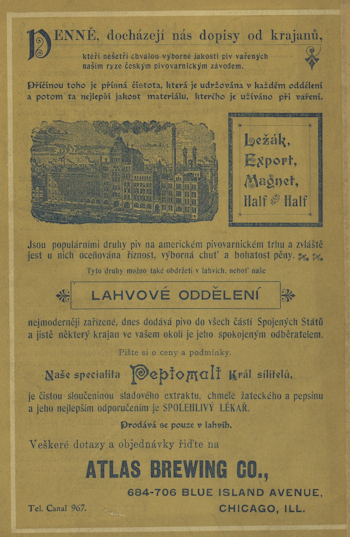 among the out of town trade, which has reached almost twice its former proportions.  During the past season the Atlas Brewing Company made a decided hit with its tonic specialty, manufactured from pure malt, hops, and pepsin, and which has become exceedingly popuar under the name of "Pettomaltine."

The Atlas Brewing company is equipped with all the latest improved machinery necessary for manufacturing the high-class products which are making the company's output Justly popular, and the management is more than pleased to have interested visitors examine the complete plant and observe what care and ingredients' are employed in the manufacture of its product."

Chicago Newspaper - The Inter Ocean, Tuesday, January 1, 1907, Page 10: BREWING COMPETITION KEEN. These Are Days of Pure Food and Pure Liquid Reform . - In these halcyon days of pure food and liquid reform the great brewing and malting establishments of the middle West, and more particularly those of Chicago, seem to be striving to outdo one another La their efforts to Impress upon the consumer the desirable and beneflcial qualities of their particular brands. Competition Is keen, as It is In all other lines of business, but the volume of trade has been so enormous through the year just closed that all have been Immensely successful. .

Particularly is this true In the sale of the standard brands. Take one case, for Instance, that of the Atlas Brewing company. This firm, the bottling works of which are situated at 684 Blue Island avenue, almost doubled Its output of the preceding year. The Atlas company produced between 160,000 and 200,000 barrels of Magnet beer alone In 1906, while the output of Peptomalt, king of tonics, made by the same concern, was a big enterprise In itself, and far exceeded that of the old year." 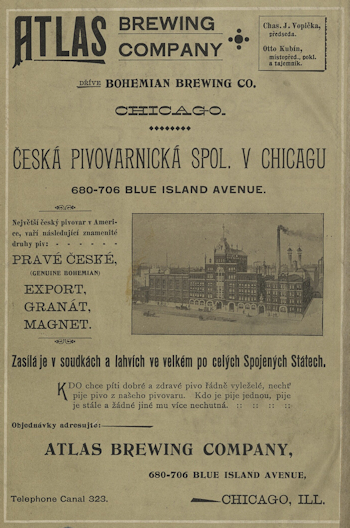 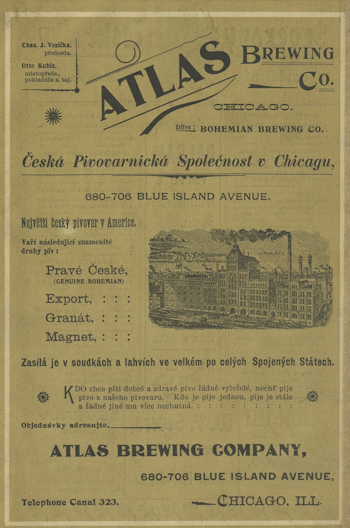 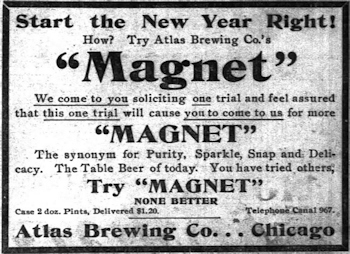