This CSAGSI web page is the online portion for the KORENY article on Potvorov and its church, Saint Nicholas. 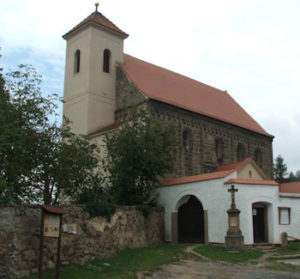 Our family ancestors were married, baptized and buried at Saint Nicholas in Potvorov, as well as the families who helped us with this paper.  But Saint Nicholas is more than a church with personal genealogical significance.  The church has been researched and reported on by historians over decades.  Art historians have studied and documented, now perhaps, every piece of art, wall painting, statue and church artifact.  Hana Tylova, in her one hundred and five page, 2015, bachelor’s thesis documents that Jan Erazim Vocel, working with the Ministry of Public Education, described the church in Jan’s 1852 publication. (1) Architects have studied, drawn, and retraced the history of structural changes and restorations of the church over its eight hundred years of existence.  Because it has such an importance helps to explain not only why it has been repaired and restored for all those centuries, but also why that work continues.  Digital imaging posting sites have albums of photos just on this building.  A Czech, very good with a computer, rendered images that allow one to view the church in a very imaginative manner.  Kostel Svateho Mikulase V Potvorove is an important building, far more than one would have imagined, if they only thought someone in their family tree had a connection there.  Image Potvorov Church of Saint Nicholas - Wikimedia - Wikipedia Commons.

Members of a Facebook Group, which I belong to:  (Vernon – Richland County, WI Czech Family History) (https://www.facebook.com/groups/1397444673853761/), helped in this paper.  Perhaps the most important researcher of our little group, Radomir, created a website which contains the names of 172 individuals from Potvorov, or adjacent villages.  Seventy five of those individuals would travel to and settle in the United States.  (www.czgen.org).

Additional help from Ivan Klima, Vojtech Cerny, the Museum and Gallery of the North Pilsen in Marianske Týnice, and others is listed in the references and resources.

Potvorov, near the larger town of Kralovice, is located within the administrative district of Plzen.  Potvorov seems to have had a larger population in past years, but now, Wikipedia lists its population at 176 inhabitants.

A visit to ancestry.com, using a search, by just entering "Potvorov" yielded 770 listings.  A Google search “potvorov findagrave” provided 276 hits, including one from the nation of Mexico. (Both, of course, would not be 770 or 276 distinct and separate listings.) 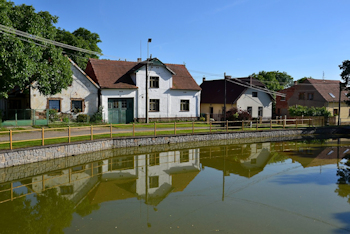 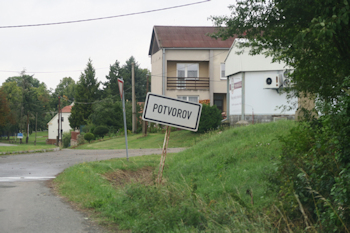 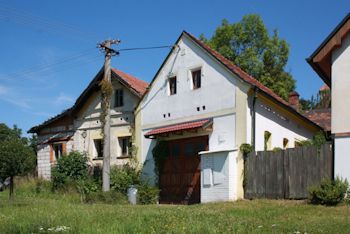 To a number of the descendants of Czechs who arrived in the United States and first settled in Vernon and Richland Counties of Wisconsin, the Czech village of Potvorov and its church, Saint Nicholas, have an importance.

Potvorov, and its church, which appears to have over eight hundred years of recorded history, is one of so many examples of our ancestors, leaving their native land, embarking on a long journey, and seeking a new beginning in the New World.

The descendants of our earliest known ancestors of this region would begin to arrive in the USA during the mid-1800’s, joining others from the same local villages they left, to live in Chicago, Wisconsin and Iowa.  Today their descendants are found in many states across our nation.

Individuals in the records of the Potvorov Church, settled in many places, including Chicago.  Anna Hora, born 6-28-1866, daughter of George Hora and Marie Nachtigal, baptized at Saint Nicholas, came to the USA, eventually marrying James Benesh in Chicago in 1884.  Anna lived her life in the Chicago area.

While a 1550, 1791 and 1799 record seems really old, it does not accurately reflect the age of the village of Potvorov or its church.

Above - Marriage Laurentius Liska to Mary Hynek on January 27, 1799.

Above - Marriage Georgius Sebranek to Barbara Babor on October 30, 1791. 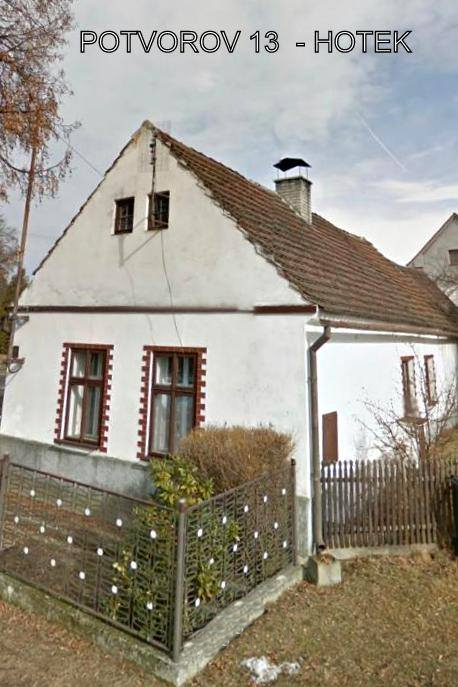 Our Wisconsin Vernon and Richland Counties Facebook Group (https://www.facebook.com/groups/1397444673853761/) has a member, Radomir, who has created a database of Czechs in those two counties.  His database (www.czgen.com) has 172 listings related to Potvorov and 75 of whom left Bohemia and settled in the United States.  One example is Vaclav Hotek.  Vaclav was born in 1840 at Potvorov #13.

Vaclav married Marie Stanek, in Potvorov in 1862.  They settled in the United States. 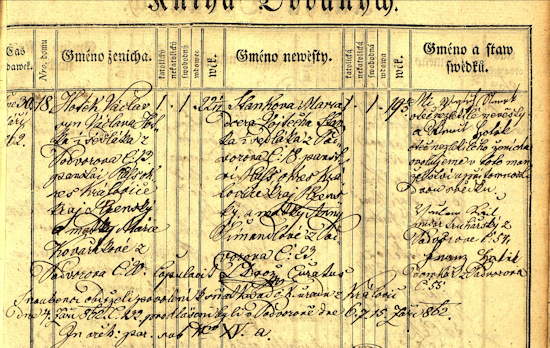 Archive records above - Images from http://www.portafontium.eu/contents/register/soap-pn/cirkev-rimskokatolicka/potvorov 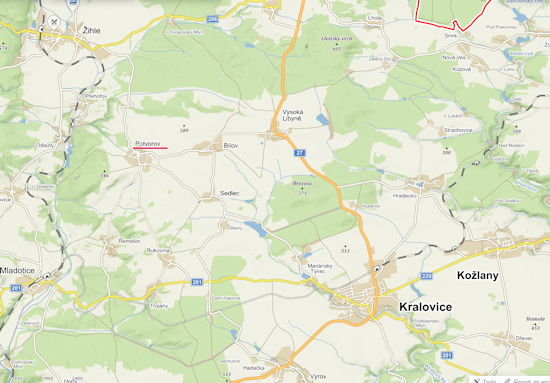 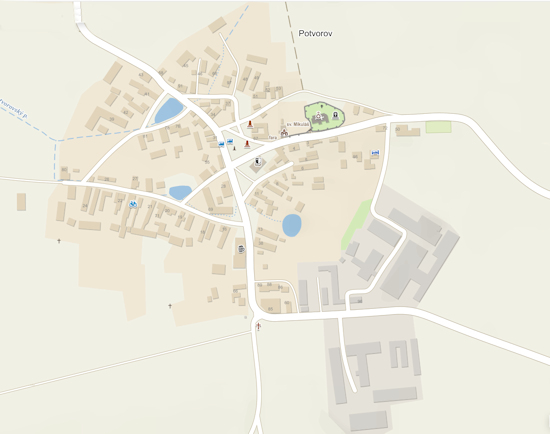 Images: Above Left - Potvorov and nearby villages (Mapy.cz)  Above Right - Potovorv buildings and roads (Mapy.cz) 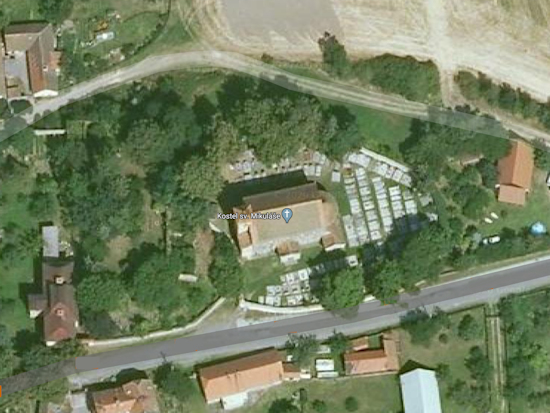 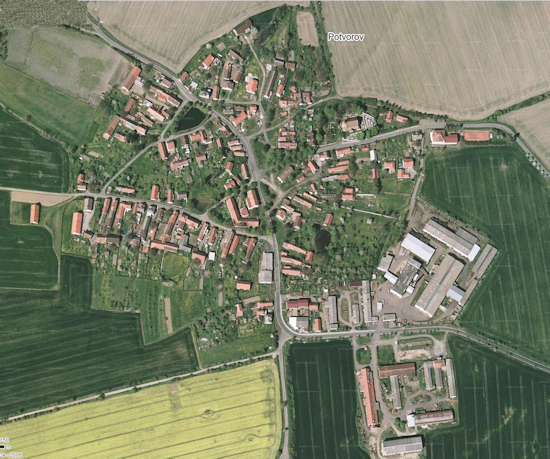 1204 A.D., two hundred and eighty eight years before Columbus would begin to tell Europe of his discoveries in the Western Hemisphere, there are already references to the village of Potvorov.  Agnes of Potvorov is mentioned in most early references as having influence in the village and the Church of Saint Nicholas.

A book was purchased during a church visit, (“Romansky KKostel Svateho Mikulase V Potvorove” by Vojtech Martinek and Irena Bukacova, published 2011 – 2012). The book including summaries from wall plaques in Saint Nicholas, and the village website (www.obec-potvorov.cz) indicate that the Church of Saint Nicholas, by best estimates, was probably completed in the year 1240 or 1241.  Agnes of Bohemia is mentioned in many of the papers as having a connection to the building of the church.  She is also mentioned as being buried in the church, but no confirmed verification for that fact has been found.  (View Church Wall Plaque 1) (View Church Wall Plaque 2)

If the building date for Saint Nicholas is close to actuality that would make its construction about two hundred and fifty years before the explorations of Columbus, and five hundred and thirty four years before our own Declaration of Independence.  Residents of the nearby villages, and of Potvorov were already celebrating religious events and services in their church. 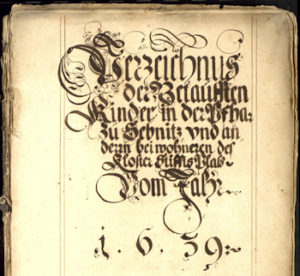 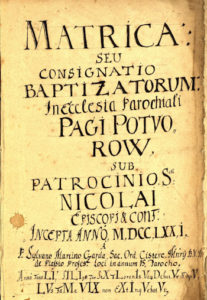 With the help of Nancy Lawrence of the Vernon and Richland County Facebook group, it became possible to find names of many Potvorov inhabitants in 1651. In that year, the Berni Rula, a listing of Catholics by village was undertaken.

Link to PDF segment of Berni Rula listing Potvorov and adjacent villages.  Page 159 of PDF.  OR   View as an Image 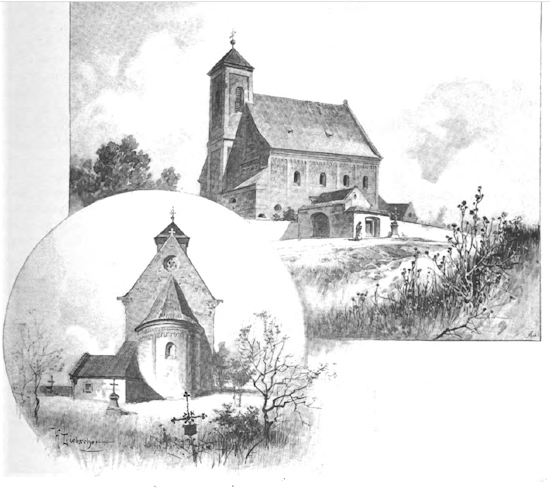 Page 152, again describes the arrangement to create the Potvorov church, and again indicates a taller original tower for the owners.

Over the course of centuries, Potvorov and Saint Nicholas are a reflection of the changes that took place in Bohemia. Nobles, ruling families, the influence of religion in daily life in Potvorov, are a microcosm of those same themes across this region of the world. 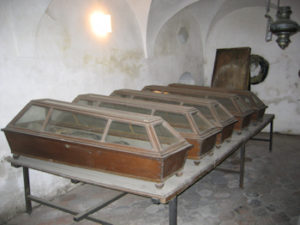 While Potvorov and Saint Nicholas had numerous religious organizations, nobility, and rulers that influenced or controlled the village and church, one of the more interesting is the Gryspek Family.  Florian Gryspek and family have their information and stories online.  That story and their mummified remains at Saint Peter and Paul church in Kralovice are described at a website:  https://www.gryspek.cz/en/.

Many documents describe that this church was built to be more than just a church.  In its earliest configuration, located at a high point of the area, it appears to have been part of a larger fortified or protected area.

A wall plaque on the church wall explains the church provided protection for the villagers of the area: “The church with high set windows functioned as a fortress, it was surrounded by a rampart and a moat.  In the Western side of the Roman (Romanesque) building, there was a massive tower like unit, of which there remains the gallery element (choir) under vaulted with two fields of cross vaults.

Tylova’s thesis paper references a document describing an arrangement between the provost of Zeraz and the abbot of Plasy to secure a place in the church for "subjects" in the case of danger, where there is a direct mention of the existence of a tower: (2)

The tower seems to have served as a home, or refuge, for the nobility of the village.  It could have been several levels higher than the church itself, with its own private entrance to the church.  A tower above the Western front was destroyed either during the Hussite Wars or the Thirty Years’ War.

While no other church exactly duplicates Saint Nicholas, there are a number of churches which have many similar characteristics.  The “Association for the Romanesque church in Potvorov” does point out that the region of northwestern Bohemia does contain a number rural churches which have a “single nave with an apse”, appear fortified, and have distinctive large, substantial, towers.   They are distinctively classified as “Vinec Churches”, name a village, with a similar church, in the area of Mlada Boleslav. 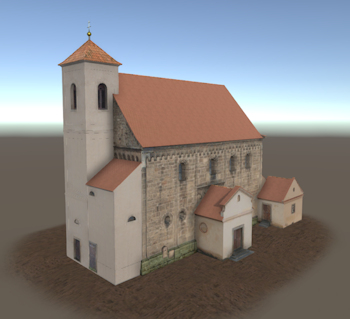 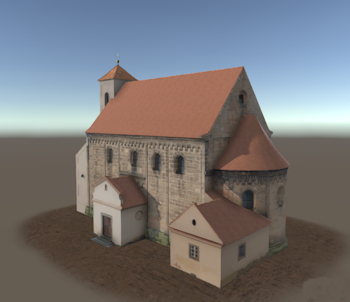 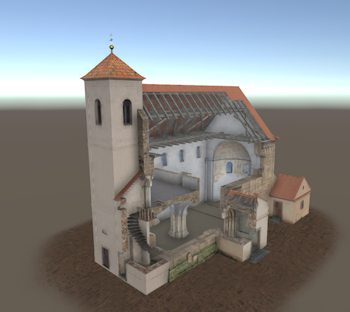 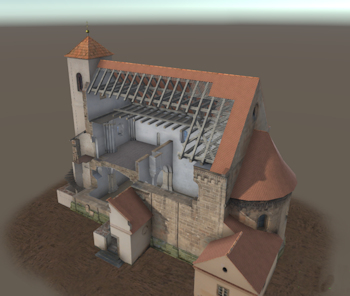 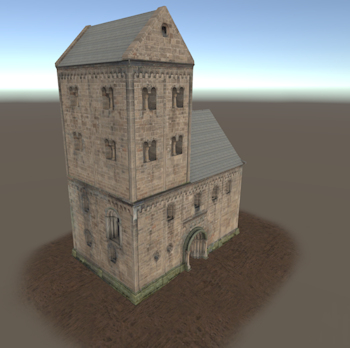 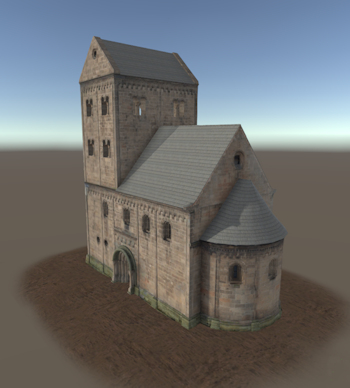 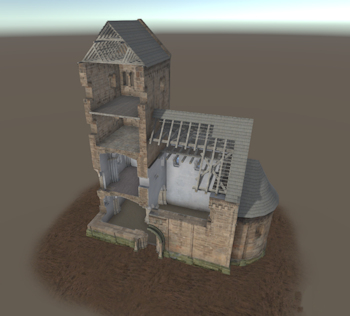 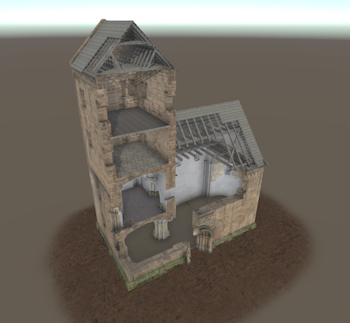 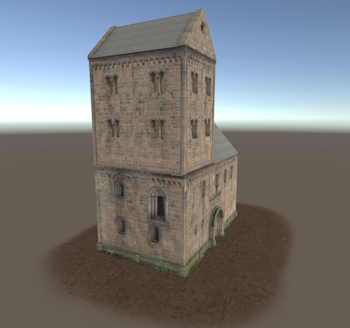 (One of the most comprehensive web sites related to Potvorov and Saint Nicholas Church is “Spolek pro Romansky kostel v potvorove” (The Association for Romanesque church in Potvorov – www.potvorov.cz – a civic organization working to rebuild and maintain the Church of Saint Nicholas – founded 2007.)

The timeline provided by this organization indicates that by around 1450 repairs to the church were underway, frescoes were added and the church by 1489 had its first bell.  The historical summary continues by mentioning from around 1450 to 1623, the church became a protestant church.  Again the church was damaged, in 1618, occurring during the Thirty Years War.  A Swedish army is mentioned as moving through the Kralovice area, causing damage through the region, including fire and damage to the church and vicarage. (4)

The Potvorov Village web site (https://www.obec-potvorov.cz), along with the Association web site describe that over the course of centuries, additional repairs and modifications would take place.

In 1901 a major reconstruction project began.

In her thesis, Hana Tylova explains  that in 1901 a new civic association was formed to repair Saint Nicholas Church.  Pastor Francis Barta was the parish priest from 1886 to 1909. (5)  Barta became the first chairman of the “Society for the Reconstruction of the Church of St. Nicholas in Potvorov”. (6)

September 1902 Bohumil Sterba becomes the architect to work on the repairs to Saint Nicholas. (7)

Parts of the church tower had been removed decades earlier and to be constructed.  A fire, in 1849, did damage to the interior of the church.  The church received a degree of notoriety, when in 1895 at the Ethnographic Exhibition in Prague, people began to acknowledge the church for its historic nature and artistry. (8). In 1898 lightning, not good, of course, did have an unexpected effect on the church.  It revealed paintings, previously covered over. 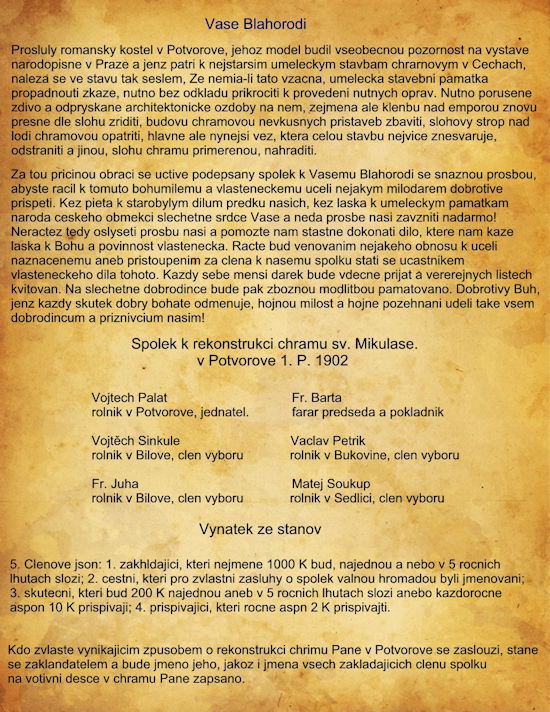 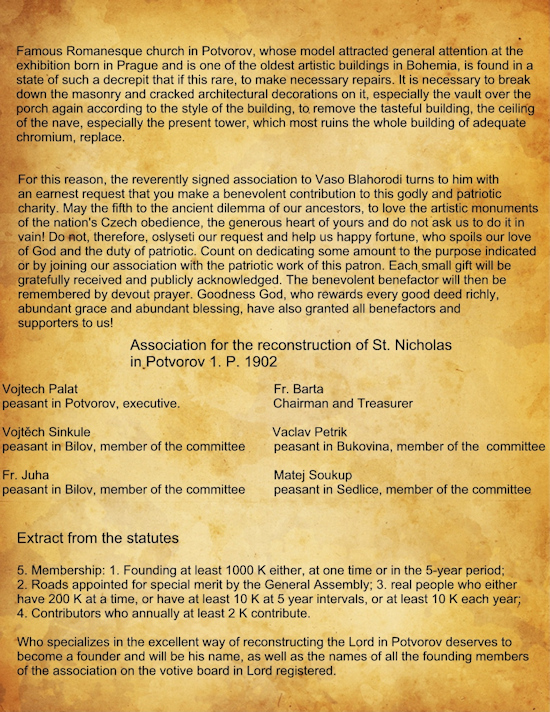 Images below -Portafontium Archive has the Chronicle of Potvorov from 1897 to 1952 online.  It includes several pages devoted to the years of the reconstruction of Saint Nicholas.  It includes a sketch of a potential church tower rebuild. 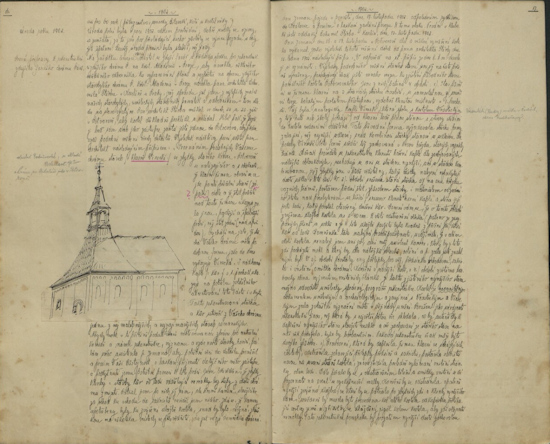 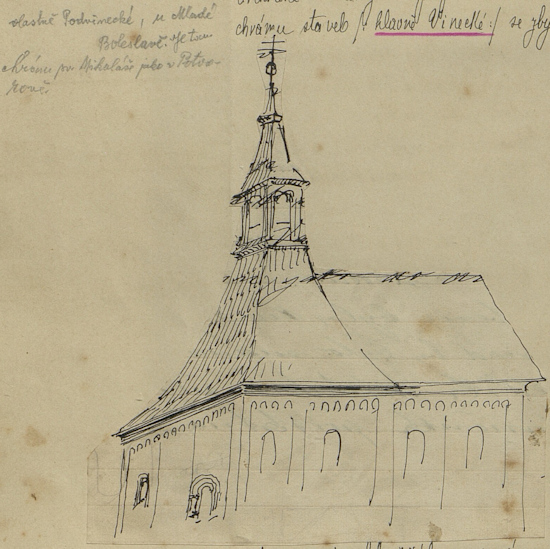 Sterba noted a number of issues which needed attention.  The church roof and tower would have need of work.  (Image references above from the Potvorov Chronicle summarizing this.) The stone, comprising the current church floor, was originally the stone of the original tower, had raised the floor significantly.  A new floor of Venetian terrazzo was installed after the tower stone was removed and the floor lowered to an original level. Masonry work, plaster work, new doors were also part of the repairs accomplished.  Roof work was also undertaken (9).

Portafontium Archives has the Chronicle of Potvorov from 1897 to 1952 online.  It includes several pages devoted to the years of the reconstruction of Saint Nicholas.  It includes a sketch of a potential church tower rebuild.

Images Below:  Charles University of Prague has links to Czech church archives which contains information and images of many Czech churches.

1912 Publication - Church of Saint Nicholas and a diagram of the Baptismal Font, still found within the church. 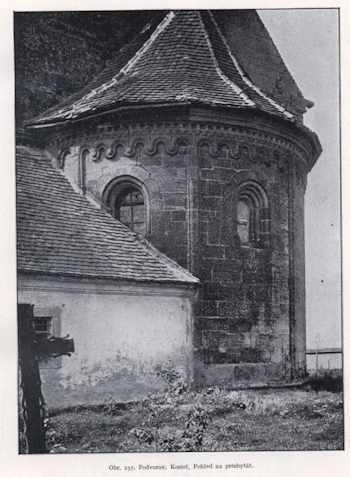 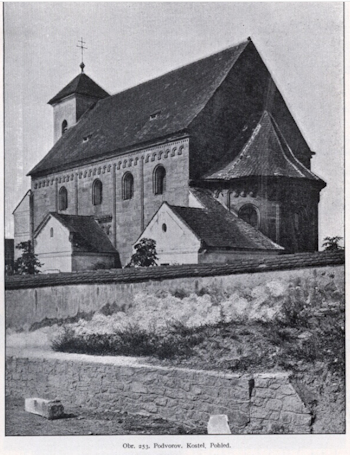 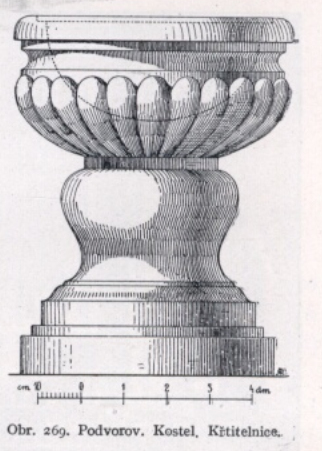