I am familiar with using birth / baptism, marriage and death records from the Czech Archive Regions, similar Slovak records through Family Search, the Trinity Lutheran Slovak record through Ancestry and the City of Chicago Catholic Church records, also through Family Search.  But I have found, and know that there are many other forms of Czech records (some similar) which can be found.

The CSAGSI Journal, Koreny, in the August 1996 issue contained an article by Robert Baumruk “This Old Document” which described ‘List Domovsky’ or Certificate of Domicile.  Baumruk referenced a book, printed in 1974, as a good source of information (Daniel M. Schlyter – “Czechoslovakia – A Handbook of Czechoslovak Genealogical Research”).

The CSAGSI Journal, Koreny, in the May 1997 issue contained an article by Paul S. Valasek “This Old Document” which described a “Rodny List” or certificate of birth.

Past issues of the Koreny are available in the “Members’ Only” portion of our web site.

Click on any image, and a larger version of that image will open. 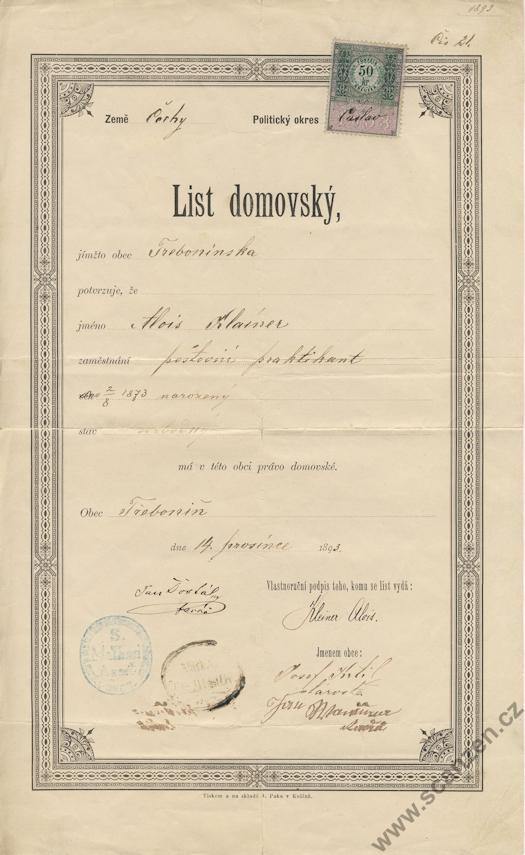 Blanka Lednicka’s blog site has a very concise summary of the List Domovsky.

A very detailed summary can also be found at the Czech Ministry of the Interior website.

I get to https://translate.google.com and with Czech selected, I enter the above address into the left side box:

Then I click the web address under the English side box and the computer spins for a moment and Google provides a translation.  In my opinion, it is a good enough translation to get the meaning of the original Czech article.

Using the Czech Archives web sites, one will see (I am using Roman Catholic records as example) the church baptismal record of an individual.  It usually also lists the birth date along with the baptismal date.  There are other forms of recording a birth and many are associated with the wording “Rodny List”.

The Czech Wikipedia site (https://cs.wikipedia.org/wiki/Rodn%C3%BD_list) contained one of the easier to read and understand descriptions of Rodny List, or Birth Certificate.  Once again I used Translate Google and felt it had done a good job.

Historically, it evolved from a baptismal letter (for Christians), which was initially merely evidence of baptism (including data on parents and godparent ), but later included data on the birth of the baptized. For a transitional period, the document in question was also referred to as a birth certificate and a baptismal letter (approximately in the 1930s and 1940s). 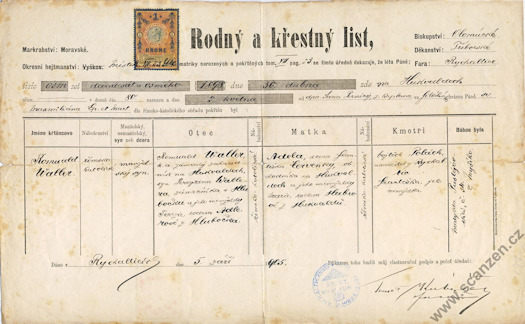 Using the Czech Archives, I have always tried to find the marriage records of my Czech ancestors.  I think they are really useful (especially those that are clear enough for me to read and understand).  I am especially grateful to those who recorded additional information on the archive record, such as the actual birth dates, and villages of birth, for the couple being married.  I even found one archive record listing the date the couple left the village for the USA or the date of death of a couple member or their parent.

The Oddaci List, as with other record types, the Czech marriage certificates varied over time in the information they recorded. 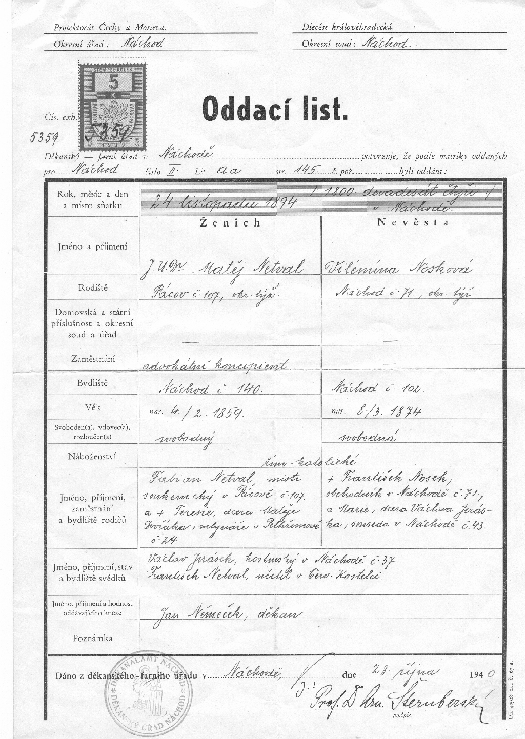 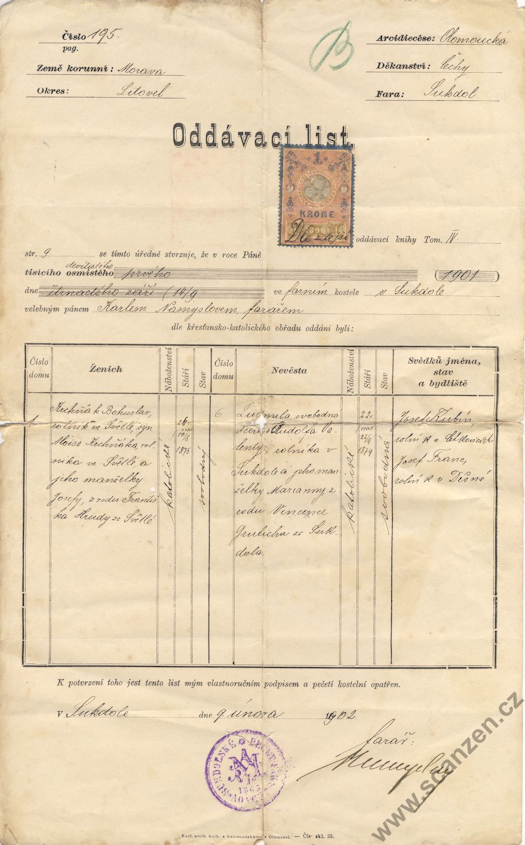 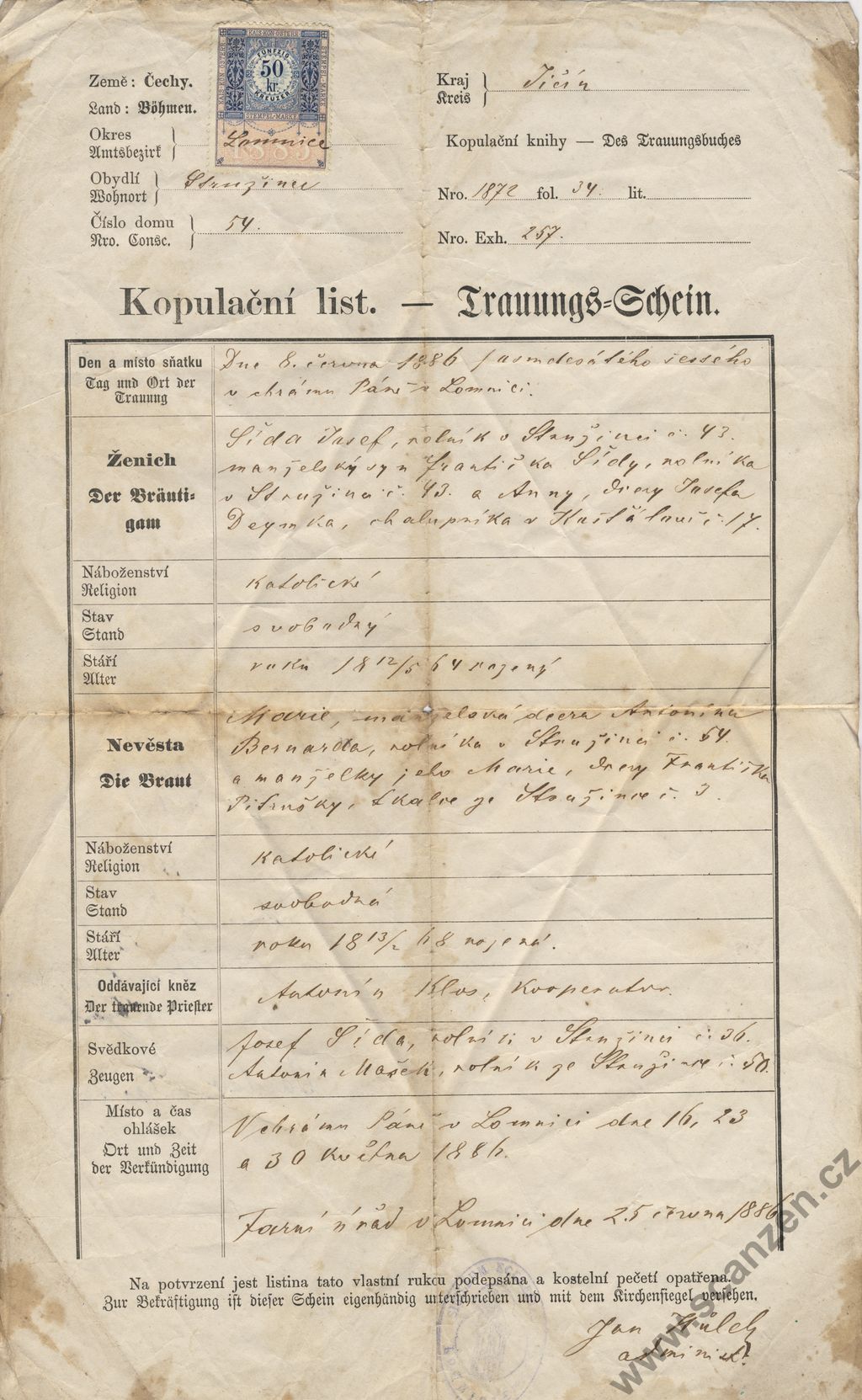 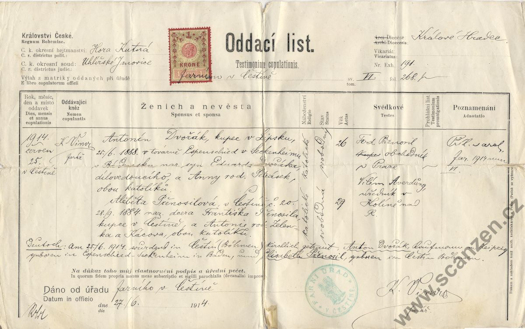 Most times, when I am using the Czech Archives, I find a death record (searching Catholic records) and it is a short and simple record.  Looking for more information, I returned to the Czech Wikipedia web site (https://cs.wikipedia.org/wiki/%C3%9Amrtn%C3%AD_list) and found an example of a newer version of an Umrtni List. Later versions of the Umrtni List, and the Czech government forms, were very different from what I have found so far in my use of the Czech Archives. 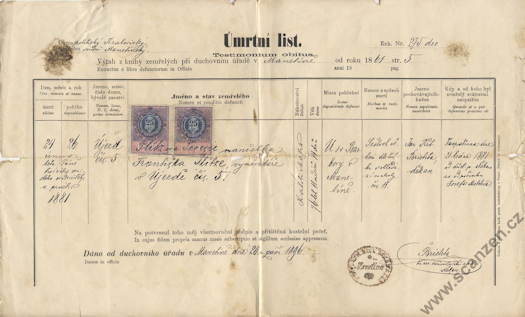 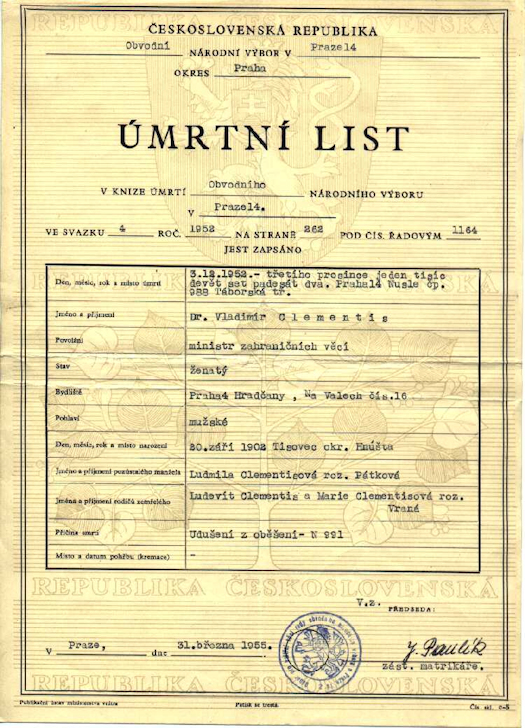 Searching for different types of certificates, of which there seem to be so many, I ran across “List Tovaryssky”.  While the Internet has quite a few image samples, it was not as easy to find a good description.  The University of Nebraska Czech Heritage Project had an image and a good summary.   https://www.unl.edu/czechheritage/2001SVUConf.shtml  This certificate is a record of completion of an apprenticeship program. 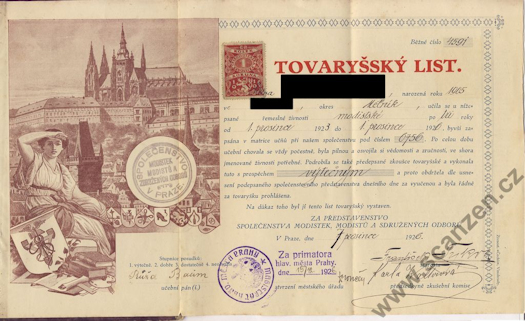 https://www.mvcr.cz/mvcren/ - Ministry of the Interior of the Czech Government – Forms, documents, immigration information, and really a lot more.

https://cs.wikipedia.org – Czech Wikipedia – Very good source – Remember, you can always put the website into Translate Google and receive a decent translation to work with.

http://www.scanzen.cz – A treasure trove of scanned Czech documents and more.

Above – Another excellent source for images and information on Czech documents

https://www.iabsi.com/gen/public/document_examples.htm - Slovakia web site – This web page has many images of document types.

While searching for document images and information, I ran across the web site below.  It is a really comprehensive story of a Czech mill.

http://www.podlesanskymlyn.cz/index.htm Welcome to the website of Podlešanský mlýn, which is located near the village Lešany nad Sázavou in the district Benešov.

Even more interesting for my search was this web page which contained images of Czech documents. http://www.podlesanskymlyn.cz/history/album1/index.html

When I was looking for information on Czech birth, death, marriage and other certificates, I did Google searches.  Many of them yielded local, district, and national government sites in the Czech Republic.  They had current information on the certificates mentioned in this document and many others.  Some sites had the option to view the web pages in English.  Some sites I had to first place the web address into Translate Google.