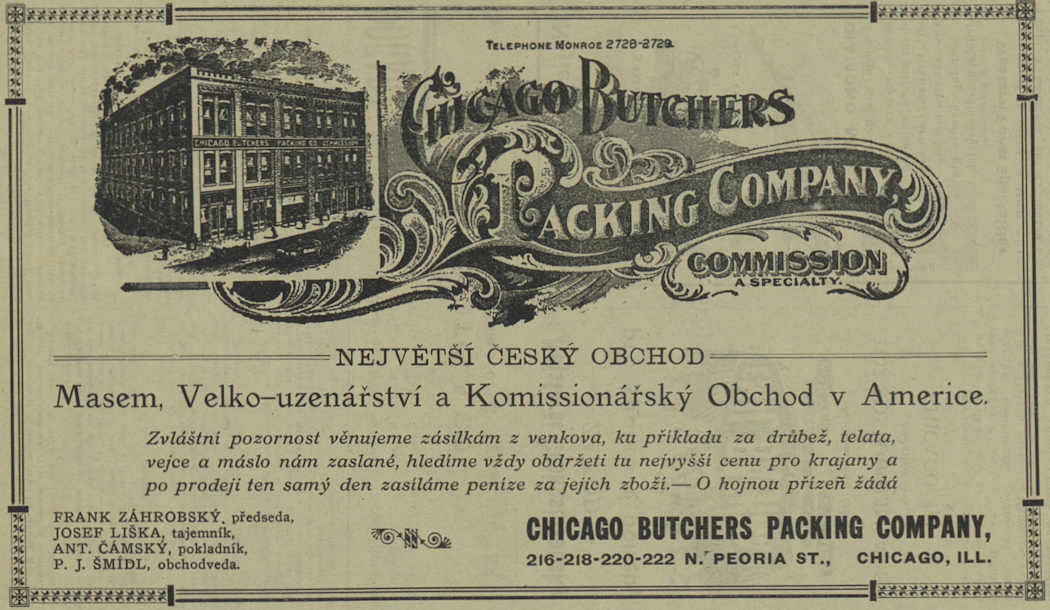 Joseph Liska arrived on May 23, 1887 from Port Bremen to Port Baltimore aboard the ship Strassburg.  He was listed as Josef Lischka, destination as Chicago. (3)  Joseph married Katerina Horazdovska on August 22, 1893 in Chicago.  Katherine, according to her Saint Wenceslaus Catholic Church Baptism record was born on August 15, 1874 to Joseph Horazdovsky and Anna Stropnik. (4)

Joseph Liska was a butcher.  That is already listed in his 1900 Census record.  His family was living at 526 W. 18th in Chicago. (That location now appears to be an empty or parking area.)  Living with his family was his mother in law, Anna Horazdovsky, and two other butchers listed as Bohemian. (5)

In 1901 Joseph began to organize and expand his business. He and several others formed the Bohemian Butchers Association.  The incorporation was listed in the Chicago Tribune.  (6)

In 1902, the place of business was listed as 526 W. 18th Street, Joseph Liska and Joseph Fiala were listed.  Published in 1904, the book, "Certified List of Illinois Corporations", lists the Bohemian Butchers Association of Chicago, capitalization at $10,000, operating at 22nd and Ashland Avenue.  B (Bohus) Hak of 592 Laflin and Joseph Liska of 526 W. 18th Street are listed.  (7)

While the corporate name was an accurate description of the composition of the people who established the business, it may not have been a good choice.  The name was also associated with a less formal grouping of Bohemian butchers who attracted headlines for their actions in more than one city in the United States, years before this corporation was founded.

In Chicago, in 1899, this group is credited by the Inter Ocean newspaper as beginning the movement to close all grocery stores and meat markets on Sundays.  The article indicated that in the Bohemian communities of Chicago, this was met with great success. (8)  In 1902, several newspapers across the country, reported on a strike of teamsters in the Chicago Stockyards.  Supported by the Bohemian Butchers Association, meat sales and deliveries to much of Chicago were suspended by the Association to aid the teamster's cause.

By 1905 the Bohemian Butchers Association seems to have disappeared and it was replaced by the Chicago Butchers Packing Company.

1905 was also the year for another business venture involving Joseph Liska.  Appearing in the Chicago Tribune on May 2, 1905, Page 12 was the incorporation notice for the "Bohemian Bazaar", listing Joseph as one of the company founders and investors. 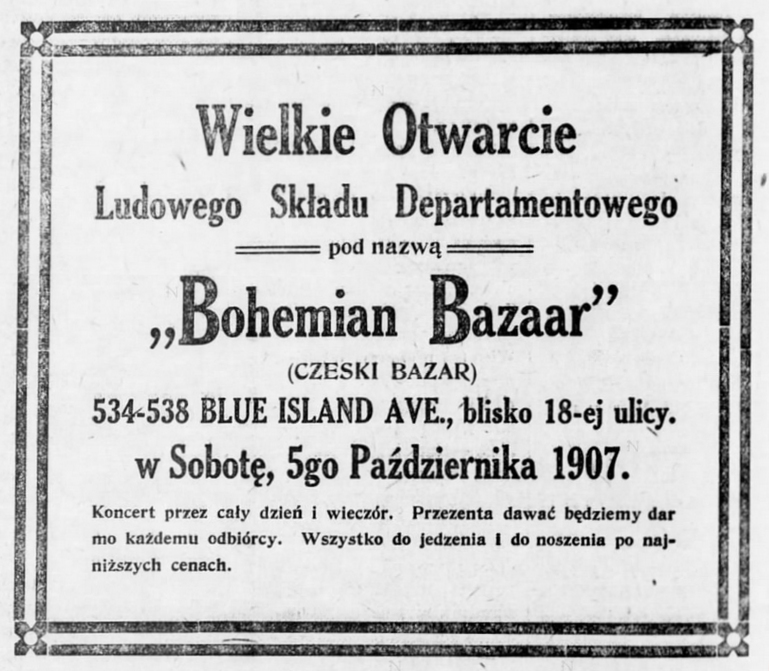 Grand opening
People's Departmental Composition
under the name
Bohemian Bazaar
Czech bazaar
534 - 538 Blue Island Ave. close to 18th street
on Saturday, October 5, 1907
Concert all day and evening. We will therefore give a gift
to every recipient. Everything to eat and to wear at the lowest prices.

A series of articles was published by the Denni Hlasatel Newspaper:

We announce to all the Bohemians of Chicago that we have founded a co-operative society under the name of Cesky Bazar (Bohemian Bazaar). For this enterprise ten thousand share have been issued, valued at ten dollars a share, a total capital of one hundred thousand dollars. The shares are issued in small denomination in order to enable even the poorest to secure one or more of them and thus become a part-owner of the Bazaar.

Only one member of a family is entitled to receive one or more shares, and no one may subscribe more than $10,000. Thus individual control is made impossible.

The shares will be paid for in two installments, the first to be due as soon as all the shares are subscribed, the second when the purchasing for the Bazaar begins.

The Bohemian Bazaar will consist of and deal through the following departments: clothing, yard-goods, footwear, and men's and women's furnishings.

It will sell all sorts of fashionable ladies' apparel, curtains, rugs, furniture, household goods, stoves of all kinds, groceries, and in general everything included in the stocks of department-stores.

It is a pleasure to us to announce that this good idea has taken root, and that a great number of shares have already been subscribed for. But more shareholders are needed to make it possible to begin our work. We further inform the public that each shareholder will enjoy special purchasing advantages in all departments besides the yearly dividend which he will receive, and at the same time he will remain an owner, according to our charter, for ninety-nine years, so that perhaps even the third generation will enjoy the benefits of this enterprise.

Do not, therefore, lose such an opportunity. Sign up at the next meeting of the Cesky Bazar! The meetings are held regularly at 8 p.m. in the hall of the Plzensky Sokol.

Bohemian Chicago, rich in variety of social recreation, in nationalistic and benevolent organizations, has, in the past year, made progress in the economic field which will represent our people in a notable manner before the American public and contribute effectively to our national community. The Bohemian Bazaar, in which are associated a number of our countrymen, to-day will open its richly stocked store, located at the corner of Twenty-second street and Kedzie avenue, which promises the shareholders large financial rewards, especially if it is managed by experienced men. The store, in which is found more than $30,000 worth of general household merchandise, is a warehouse for products of fine quality, and excellent service is provided by employees of the establishment who have had a great deal of experience in their lines.

Because of the impossibility of finding an experienced Bohemian, the general management of the entire business was entrusted to a non-Bohemian, Mr. H. E. Shean, who has held responsible positions with the foremost department stores of Chicago. Mr. F. Schroeder, who worked most effectively for the organization of the Bazaar, was placed in charge of the clothing department, and Mr. Aug. J. Hubek has charge of the shoe section. More than sixty persons, most of whom are Bohemians, are engaged in the business.The store was open for inspection yesterday to numerous visitors, however, beginning at noon to-day. Sales will be made in all departments.

Our countrymen living on the southwest side will have an excellent opportunity to buy their necessities in a genuine Bohemian enterprise, which was founded by the people--for the people.

A promotional meeting was held last night in Sokol Chicago Hall, the purpose of which was to acquaint the general public with the basis upon which a co-operative business is founded. This establishment, the Bohemian Bazaar, has increased its capital to $150,000 and is now selling shares at $10 each; individuals may own from one to twenty-five shares. Many countrymen subscribed for shares at yesterday's meeting and much enthusiasm was displayed toward the enterprise. Applications for shares may also be made to the secretary, Joseph Liska, 526 West 18th street.

An Involuntary petition in bankruptcy threw the Bohemian bazaar, a cooperative department store at 534 Blue Island avenue, Into the hands of a receiver yesterday. The stock was held by 1,800 Bohemian residents of that district. The largest amount of the stock, held outside of the directorate was to the value of $50. The total capital stock was $180,000.

" An absolutely honest failure," was the way Attorney W. W. Witty, acting for the petitioning creditors, characterized the assignment.

The store was organized. eighteen months .ago. It was planned to carry every commodity that might be required by the members of the corporation. For a time there was prosperity. It was considered a successful institution.

When the financial stringency developed there was a falling off in the receipts of the store. The number of clerks was reduced. The directors were called upon several times to advance money to keep the organization in operation. Finally it was agreed that a failure was only a question of time, and it was believed that more might be realized by a receiver than at some later time.

Frank Schraeder, with a claim. of $442 against the corporation; Thomas Valdar. claiming $1,000, and Joseph Pelant, with a claim of $420, appeared late in the afternoon before Judge Landis. After hearing the statement of Mr. Witty the court appointed the American Trust and Savings bank receiver. Possession of the store was at once turned over to the trust company. and for the present, the business will be continued.

The assets, according to the petition, are valued at $60,000. The liabilities are placed at $105,000. John Witrous is president of the company. Frank Schradner manager, and Joseph F. Schuh secretary.

Not Known to Stockholders.

It was not known in the neighborhood last night that the store was in the receiver's hands. It is not open in the evenings, and there was no notice of the courts action in the window. Even stockholders would not believe that the store had failed. " We have 1,800 shareholders who have about $10 apiece in the concern." said Mr. Schuh. " If the store can be carried along for a short time I believe that it will make money again, as it did before. If it does no one will lose anything at all. "

It was not decided until today that this step would be necessary. But our directors finally concluded that it would have to come, and the sooner the better for everybody."

SEE THEIR MONEY GO UP IN SMOKE

Co-Operative Store at Chicago Destroyed Many Rescued from Threatened Death.

Chicago, March S. Thirty-five persons were rescued from threatened death in flames, one man was severely burned and a co-operative store in which hundreds had Invested their savings was burned early in the day, while frenzied men and women losers knelt in the street and prayed that the store might be saved. The stock was destroyed and the building badly damaged, the total loss being $50.000. The fire was in the Bohemian Co-Operative department store, known also as the Bohemian Bazaar, 534-538 Blue Island avenue. It spread so rapidly that a number of families in adjoining houses were cut off and were rescued by the firemen, while rapidly that a number of families in from their homes and crowded about the burning building. Many of them had their life savings invested In the store, and a number became hysterical as they saw their savings vanish in smoke and flames. The police had difficulty in keeping excited citizens at a safe distance from the fire.

NOTE: In 1905, Joseph Liska is listed as one of three mentioned in the incorporation of the Bohemian Bazaar.  In 1906, he is listed in the Denni Hlasatel article as secretary.  In 1908, at the time of the bankruptcy declaration, Joseph F. Schuh is listed as the secretary.

In 1905, Joseph Liska also began the incorporation and organization of the Chicago Packing Company, seemingly the Bohemian Butchers Association he was first involved had either been dissolved, or would be shortly.