The ship Elsie departed Hamburg on 9-17-1852 and arrived in New York City on 12-7-1852.  Passengers included: Stech: Adalbert 45, Catherine 42, Johann 18, Franz 12, Adalbert 9, Thomas 6, Franziska 15, Marie 3, Valentin 1/12.  Mirotice was listed as their last residence. (1) It is possible that the Stech family had reached Illinois before the end of 1852.  Sons Albert and Tomas appears to have spent  a portion of their years in the United States living in Chicago.  Their parents and several of their siblings did not remain long in Chicago, settling closer to the Indiana border, or within Indiana itself. 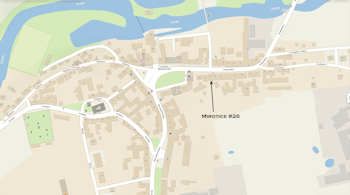 Mirotice is within the District of Pisek.  Wikipedia lists a current population of approximately 1,200.  (2) 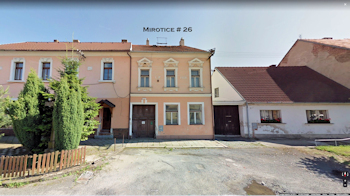 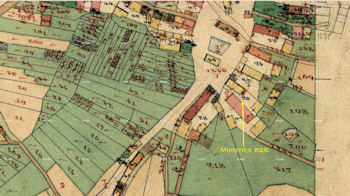 In the United States, the Stech family have records which list them as Staff, and others for several of the family, list them as Stech.  Tomas Stech has most of his records listed as Stech. 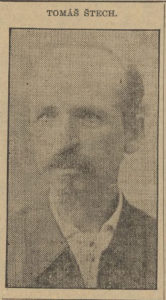 On April 8, 1914, Denni Hlasatel wrote a page one article on Tomas Stech, the title of which included "Behind the compatriot-pioneer" . (3)  Google Translate was able to provide the basic substance of that article.  The newspaper honored Tomas Stech, as "the oldest Czech settler in Chicago."  The article was an interview with his wife, Katerina.  She recounted his story of arriving in Chicago on December 22, 1852, with a clear memory of his mentioning Fort Dearborn (the second fort so named) and the sight of Indians still in the area.  (Image Tomas Stech (3)

The family, according to Katerina, first lived on North Clark street, at that time a rather unsettled area with simple, log cabin style homes.  Tomas was a tanner, but that occupation caused him to have health issues.

For a period of time the family moved to Thornton, Illinois.  The Stech family lived in the area, but later Tomas and a brother would return to Chicago, and their parents  would continue on into Indiana.  The family would begin to use the last names of Stech and Staff.

The article describes that Tomas, while in the area of Dyer, Indiana, living with his family married Katerina Vones on 4-27-1870.  Katerina's brother Jacob, worked with Tomas' brother John, and the relationship developed from there.  Katerina was born in Sevetin in the district of Ceske Budejovice on 1-12-1845. (4)  Brother Jacob, sister Maria, and brother John, mentioned in the article or buried with Tomas and Katerina, also lived in the area. (5)

Returning to Chicago, Katerina recalls in the article,  she and Tomas first lived on West Huron Street.  Tomas, who had spent years working in the tannery business, as did other family members, left that profession, along with their first home and moved to Fry Street and began a wood and coal delivery business.  Tomas and Katerina had four children, none surviving infancy.

In her summary of the life of husband, Tomas, Katerina described that over the course of several decades,  Tomas became very involved in the Czech community of Chicago.  He was also recognized for his involvement.  (Google translation of continuing article): The deceased for the rest of his life was a great and enthusiastic Czech who, though quietly, worked hard in the interest of everything that concerned our national and social life. Thus, he was a founding member of the Czech-National Order, No. 58, No. S. P. S, who, as a token of gratitude, presented him with a gold badge with the appropriate dedication on the occasion of his 25-year duration. The Old Settlers 'Association then gave him the badge, with the dedication:' "The oldest Czech settler in Chicago in 1899, he arrived in 1852." In addition, he was the founder of the Bratrská Láska association on the northwest side, and for many years until recently he was also an ardent member of Sokol Čechie. (7)

Tomas died in 1914.  Katerina died in 1917.  They are buried in Bohemian National Cemetery in Chicago.  The Stech memorial was first posted to Find A Grave in 2017.  Visiting the cemetery in the spring of 2022, we found the Stech headstone, like a growing number of other headstones in the older areas of the cemetery, had fallen. 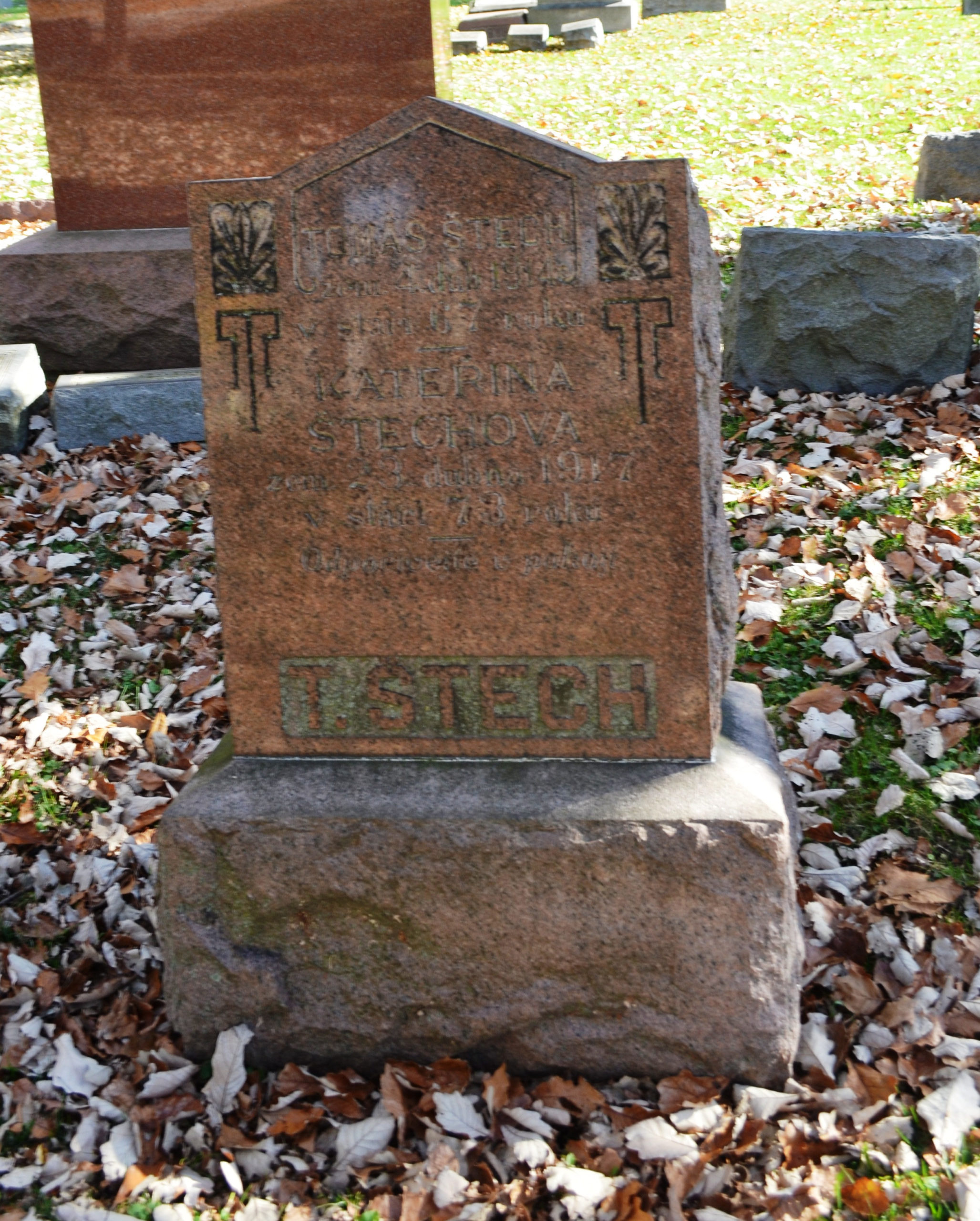 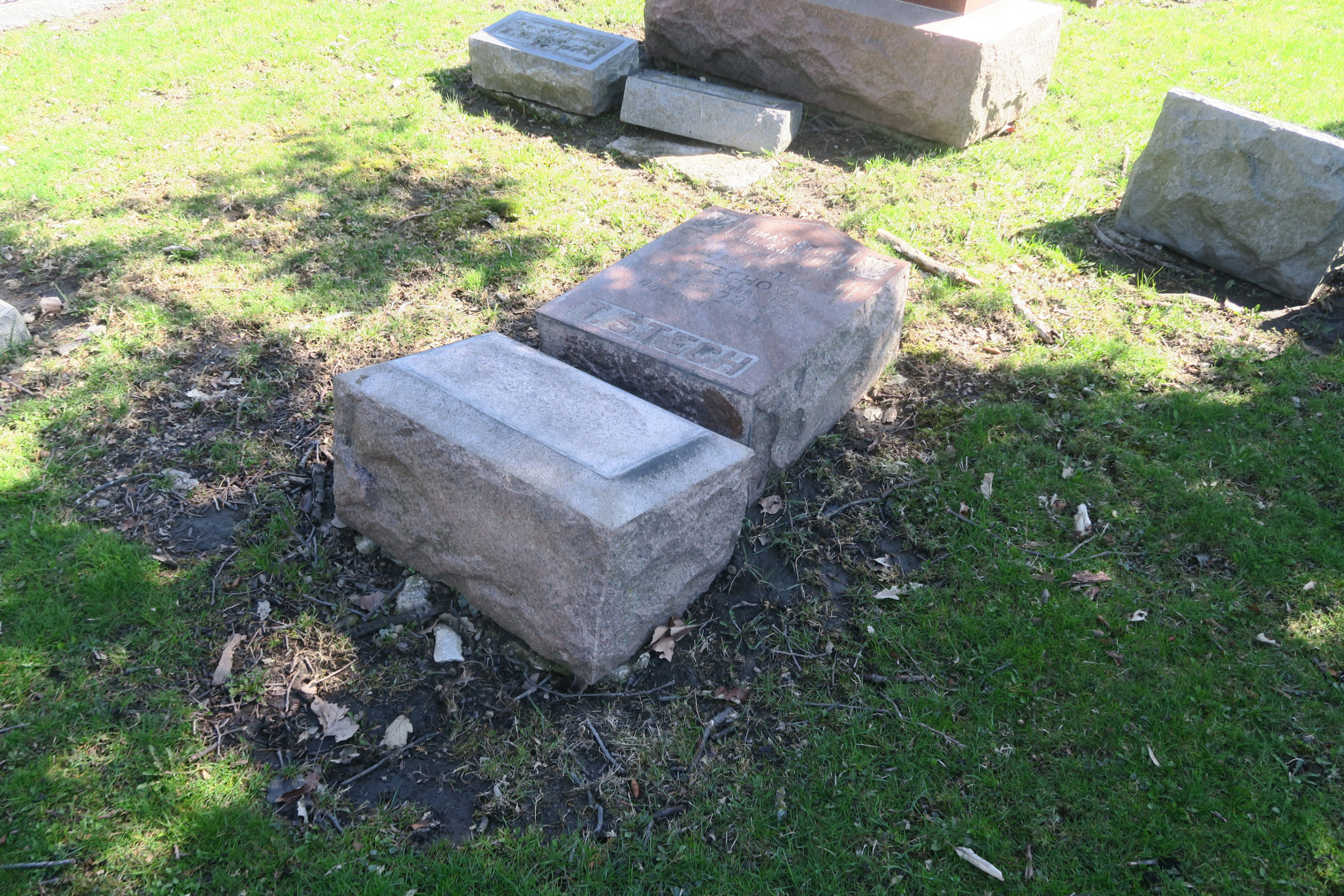 Census and Directory records discovered for the family.

Census and Directory records discovered for the family.

3. "Behind the compatriot-pioneer"  "The oldest Czech settler left is Tomáš Štech" "The same remembered Chicago as a tiny village." Denni Hlasatel  Daily announcer: the leading Bohemian (Czechoslovak) daily: a magazine dedicated to the interests of the Czechoslovak people in America. Chicago: Daily Announcer Printing and Publishing, April 8, 1914, 23 (April 8, 1914), p. [1].

7. "Behind the compatriot-pioneer"  "The oldest Czech settler left is Tomáš Štech" "The same remembered Chicago as a tiny village." Denni Hlasatel  Daily announcer: the leading Bohemian (Czechoslovak) daily: a magazine dedicated to the interests of the Czechoslovak people in America. Chicago: Daily Announcer Printing and Publishing, April 8, 1914, 23 (April 8, 1914), p. [1].