If someone just found and recorded all the information on Daniel Schustek, he would appear to be a man, born in Slovakia, married in Chicago, listed as a “pattern maker” on census records, involved in several Slovak organizations, dying in Chicago and buried in Bohemian National Cemetery. 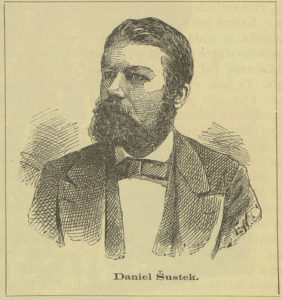 On the other hand, when one finds information under the spelling of Daniel Sustek, he is a man, born in Slovakia, went on a tremendous adventure, wrote about that adventure, married in Chicago, authored stories for a Czech newspaper in Bohemia to promote Slovak migration to the United States and is still being mentioned in publications and lectures to this very day.  Daniel Sustek appears to have been, and continues to be, better known and recognized outside of the USA than within the USA where he spent most of his life. (Image Sustek – 1)

Daniel Schustek was born on January 27, and baptized on January 28, 1846. at Zolyo Lupc, Slovenska Lupca, Okres Banska Bystria, Slovakia.  His birth / baptism record has been found with his family name spelled Schustek.(Birth Record – 2)

A number of articles can be found for Daniel Sustek.  Two of them provide very good summaries.  In 1887 the Amerikan Kalendar published a twenty four page article on Daniel Sustek.  It described his early life, but really concentrated on his adventures which took him to France, Italy and the Middle East.  (3)  In August 2021, ninety-four years after Sustek’s death, the Archeological Society of Slovakia had an exhibition / presentation detailing the life of Daniel Sustek.  (4) The Society even created and posted a PDF file.  (5)

Daniel Sustek (Schustek most USA records) would eventually apprentice in carpentry, and for a short time worked in the Banska Bystria district.  Either out of a desire to seek employment elsewhere, or drawn to the adventures of traveling, he left his homeland.

A number of articles can be found for Daniel Sustek.  Two of them provide very good summaries.  In 1887 the Amerikan Kalendar published a twenty four page article on Daniel Sustek.  It described his early life, but really concentrated on his adventures which took him to France, Italy and the Middle East.  (3)  In August 2021, ninety-four years after Sustek’s death, the Archeological Society of Slovakia had an exhibition / presentation detailing the life of Daniel Sustek.  (4) The Society even created and posted a PDF file.  (5)

Daniel Sustek (Schustek most USA records) would eventually apprentice in carpentry, and for a short time worked in the Banska Bystria district.  Either out of a desire to seek employment elsewhere, or drawn to the adventures of traveling, he left his homeland. 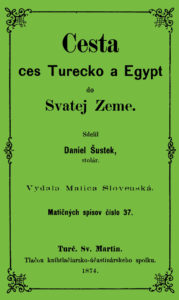 Between 1865 and 1871 he traveled through other parts of Austria and Hungary, and further to Paris, France. (6) Perhaps the portion of his travels before coming to the United States, which gained the most notoriety for Daniel, was the time he spent traveling, living, and working in Turkey, Egypt, Palestine, Lebanon and Syria.  When he arrived in the United States he would write of this adventure.  That book is still found all over the internet and used as reference material in many current Slovak web sites.  The book he wrote was:”Cesta ces Turecko a Egypt do Svatej Zeme”  (A journey through Turkey and Egypt to the Holy Land.).  Published in 1874, by Matica Slovenska, an Slovak organization in Sv. Martin, Slovakia. (7)  Sustek describes trying to find carpentry work during his travels, along with the interesting and also troubling circumstances he encountered. Perhaps most interesting are the great descriptions of the people and lands he traveled through.

Daniel Schustek married Barbara Fosinbauer (several spelling variations) on 11-17-1875, at Saint Wenceslaus Catholic Church in Chicago. Daniel’s birth record is part of the Evangelical Lutheran records for his village of birth, and son Victor was baptized at Trinity Slovak Lutheran Church in Chicago. In the 1875 Chicago Directory Daniel Schusteck is listed as a cabinet maker and living at 210 Sebor. (9)

Sustek may have published the book of his journeys in 1874, but much more was to follow.  He began writing articles for the OBZOR, a magazine published in Skalice, Slovakia, which began to influence those in the region of Slovakia to consider migration to the USA.  Online, through Google Books, are several editions, including a PDF of the 1875 magazine which contains almost two dozen articles published by Daniel Sustek, and several published by an Andrew Sustek. (10) (Image below – 11)

Daniel Sustek portrayed America, in many, but not all of his articles, as a land worthy of Slovaks, who wished to improve their condition, to move to.  Owning land would be an important lure.

In 1877, he was in Iowa with his Foshinbaur brother-in-law, looking into land purchases.  The article he wrote describing his activity there portrayed Iowa as a very good place to settle.  While he indicated in the article that he bought land, he did not stay there.  While he encouraged Slovaks to migrate to the United States and own their own land, he returned to Chicago, indicating that he had a really good job in a business with 400 employees and his salary was among the highest of them all.  (12)

Henrik Rohlicek, read Daniel’s story in the Obzor, wrote to Daniel, and eventually Daniel indicated that the Rohlicek family arrived in the United States and would work the Iowa farm land that Sustek had purchased. (12)

There is a ship record for Henrik Rohlicek family arriving at Baltimore on 5-25-1878 aboard the ship Baltimore. (Henri 45, Theresia 38, Theresia 19, Pauline 9, Karoliine 8, Stefan 6, Mathias 3, Maria – Infant. (13) No other records have been found so far for the family in Iowa, though Ancestry has what appears to be family records for land in South Dakota and other records in California.

Beginning in 1875 records for Daniel Sustek, as Daniel Schustek (and other spelling variations) appear in Family Search and Ancestry, along with newspaper clippings.  The 1875 Chicago Directory lists Daniel Schusteck as a cabinet maker living at 210 Sebor, and in 1880 as a “pattern maker” at 231 Maxwell. (14)

The 1880 census confirms that address, listing Daniel Schuslek 35, Barbary 25, Danial 3 and Mary 1. A June 12, 1895 article appearing in the Chicago Tribune records that Sustek still had an occupancy on Maxwell Street.  The article “Boys Smoke Cigarets of Clover”, describes a fire on the premises and provides us with additional information on

Daniel Sustek’s numerous endeavors. “D. Schustek, who keeps a steamship ticket agency on the first floor, and damaged it to the extent of $1,000.” (15)

An article which appeared in the 1998 Winter Volume of CSAGSI’s quarterly journal, KORENY, which was summarized from a 1962 publication of Antonin Hrebik described the chartering, in 1892, of the first Slovak Sokol in Chicago.

“…… Daniel Shustek brought from Slovakia two sons of his brother, Andrew and Jan Shustek, who became charter membes of the first Slovak Sokol unit in the United States, established in the neighborhood of South Halsted and DeKoven street on October 30, 1892, and was chartered as the First Slovak Sokol of Chicago.

The charter meeting, or, as recorded in the first minutes of the newly established society, the general assembly was presided over by the organizer, Mr. Jan Svehla, who welcomed the attending compatriots and explained the purpose of the meeting and the intentions of the organizers to establish a physical education society with the same ideals and goals as those toward which the Czech sokol had endeavored in America since 1865….” (16)

In 1893, the United States branch of Matica Slovenska was founded in Chicago.  It was this Slovak organization based in Martin, Slovakia through which Sustek had his book published.  While it gained over 1,000 members in its first year, it appears that internal disagreements between USA Slovak organizations led to its demise in the USA after five years. (17)

In the 1894 Amerikan Kalendar, which contains information on the 1893 Columbian Exposition, Daniel Sustek is pictured with other Slovaks in one of the National Slovak organizations. (18) 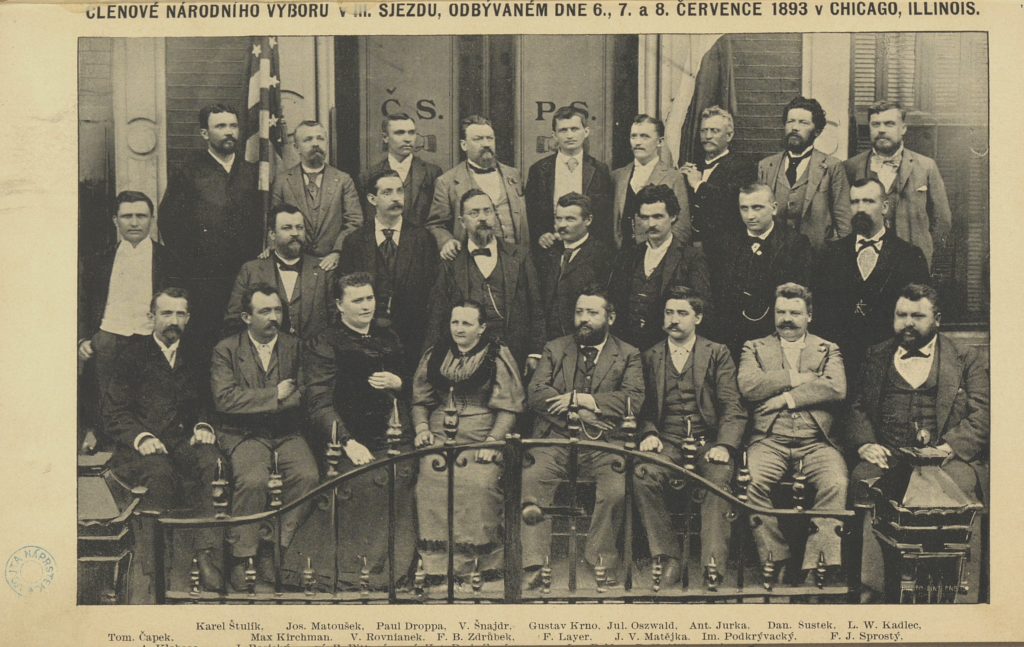 In 1896, the Chicago Tribune listed new corporations licensed in Illinois.  The Slavonic Building and Loan Association, capitalized at one million dollars was incorporated by Daniel Schustek, Andrew Schustek and others. (19)

Andrew Schustek appears to be a nephew of Daniel’s.  Born in the same village, Zolyo Lupc, Slovenska Lupca, Okres Banska Bystria, Slovakia, on November 27, 1871, Andrew arrived in the USA on May 28, 1889, New York City, aboard the Fulda.  Andrew married Anna Kiefer on September 30, 1905.

By 1900, the movement of Slovaks from Europe to the United States had been taking place for more than a decade.  Articles found online credit, or give mention, to Daniel Schustek for helping convince Slovaks to make that journey.  The Journal, “International Immigration Review”, is an example for that.  “The earliest descriptions of Slovak life in America came either as observations or else as reminiscences by pioneers.  Daniel Sustek, journeyman carpenter and one of the first Slovaks to arrive in the United States, described his experiences over a ten-year period beginning in 1873 in the self-help monthly Ozbor.  Besides focusing on his problems of adjusting to the new land, Sustek described the strange way of life he found here and provided his countrymen with extensive advice on how to make the trip, where to find work, what kind of wages to expect and how to behave in the presence of non Slovaks.” (21)

Another excellent article, available online, published nearly one hundred years after the death of Daniel Sustek is from Forbes magazine.  While the article describes the life of Sustek, his travels and accomplishments, and his many endeavors to promote Slovak migration to the United States, it gives credit to Sustek as becoming one of the first Slovak entrepreneurs overseas. This article is also one which mentions that Sustek had an interest in founding Slovak communities within the USA.  A dream which would be accomplished by others.  It also mentions that Petrzalka, Slovakia honored his memory by naming a street after him in their town. (22)

Daniel Sustek died on March 13, 1927 in Oak Park, Illinois.  Like most of his records on Family Search and Ancestry, the name on the family headstone is Schustek.  Daniel, and wife Barbara, are buried in Bohemian National Cemetery in Chicago.  (Find A Grave # 158398572)

2021 Forbes article on the life and accomplishments of Daniel Sustek
http://18.194.50.88/prvy-slovensky-cestovatelsky-influencer-ako-daniel-sustek-zlakal-do-ameriky-tisice-krajanov/

Google this book – Found on many web sites (seems all offer for sale, not viewing)
Obrázky z amerického života  (Pictures From American Life) 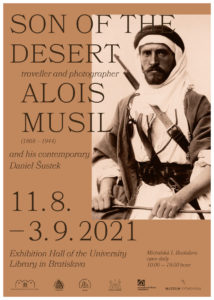