One of the most interesting articles on the History of Czechs in Chicago was written in 1937 by John J. Reichman.  It is entitled "Czechoslovaks and the Development of Chicago".  It was reprinted as "Czechoslovaks of Chicago - A Photocopy" by the CSAGSI in 1987.  There is a copy of this publication in the Paul M. Nemecek Genealogy Collection a the Riverside library and one online at family search.

Listed below are the first few pages of this article.

The first Czech immigrants reached Chicago shortly after the revolution of 1848. It was in the years 1852 and 1853 that the Bohemians began flocking to our city from New York. Here they established their first settlement in the vicinity of the northern city limits of those days, near to the Lake Michigan, at the old cemetery that occupied the southern portion of the present Lincoln Park area. They built wooden shanties and not bothering about payments of rents lived a carefree existence. However, in the year 1855 they had to leave their primitive homes, for the legal owner of the land successfully fought their adverse possession. Then the majority of the Czech immigrants moved to the neighborhood of the present Board of Trade building, and settled around Van Buren and La Salle streets. The first years of the Czech immigrants in their new adopted country were full of hardships and struggles. Most of them were engaged in the tailoring business, or were working in lumber yards, or, true to their inborn national characteristic, made their living as musicians in Bohemian saloons and dancing halls. The first Czech physician and pharmacist in Chicago was Dr. Francis Adolph Valenta who enjoyed a splendid reputation as a very able practitioner. One of the first lawyers in the City of Chicago was a Czech Jew, Adolph Kraus. His memory is being perpetuated in the name of the Adolph Kraus Lodge of the world-wide Jewish organization. B'nai B'rith and his excellent juristic
abilities found a warm praise in the brilliant memoirs "Stormy Years" by Carter H. Harrison Jr. Although as early as 1856 the Czech immigrants in Chicago attempted to bring about the publication of "one newspaper in the United States comprehensible to all immigrants", and to that purpose were for some time negotiating with that dynamic freethinker Vojta Náprstek, the first Czech weekly began appearing in Racine, Wisconsin, where Francis Korizek, on January 1, 1860, became the publisher of the "Slovan Amerikánský". The first weekly in St. Louis, Mo., was edited by J. B. Erben; its first number appeared in January 21, 1860, under the title of "Národní Noviny", apparently to remind the Czechs in this country of their great leader Karel Havlíëek Borovský, publisher of a paper of the same name. These two weekly papers v/ere combined October 30, 1861, in the bi-weekly "Slavia" of Racine, Wis., whose editor on June 5, 1863, became Karel Jonás, formerly a resident of London, England, subsequently Lieutenant - Governor of the State of Wisconsin and member of the American Consular Service. 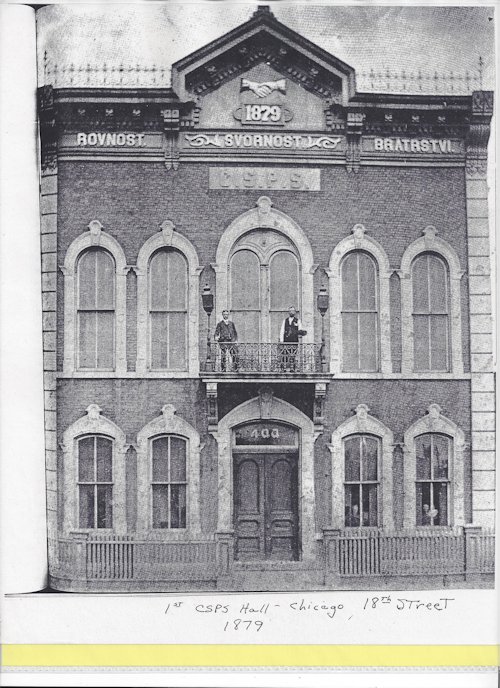 In the sixties of the nineteenth century the Czech colony around Canal street was growing not only as to its area, but also as to its financial capacity. It was extended from Ewing and Polk streets to the river and to the west as far as Halsted street. Almost all properties situated on De Koven, Bunker and West Twelfth streets were owned by the Czech immigrants. This compact community, popularly called "Prague", comprised in the year 1870 approximately 10,000 people. Czechs took a limited part in the Civil War of 1860—1864. October 16, I860, the "Slavonian Lincoln Rifle Company" was formed, uniting in its ranks 53 members. But when on April 21, 1861, the company was supposed to do its bit in the warfare, only 8 Czechs and 2 Slovaks remained. One of them, Geza Mihaloczy, Slovak by birth, was promoted to the rank of lieutenant colonel and, mortally wounded at Buzard Roost Cap March 11, 1861, was burried with military honors in Chatanooga.

Finally, Friday, October 8, 1875, the first number of the Czech newspaper "Svornost" appeared in Chicago. A young teacher and bookbinder who arrived in this country in 1869, August Geringer, a native of a small country town Bfeznice near Pisek in Bohemia, where he was born August 2, 1842, was its originator. Possessed of buoyant enthusiasm, but of scant financial means, a real pioneering leader in his field among our people of Chicago, he was more than fit to cope with handicaps and shortcomings that from the very beginning were blocking his way. The second number of his paper was issued October 12th, 1875, the third, fourth, fifth, and sixth on October 12th, 15th, 20th, 22nd and 23rd, respectively, whereupon, commencing Monday, October 25th, 1875, the paper appeared regularly as an afternoon daily in 1925 "Svornost" a mouthpiece of liberalism ever since it had been edited by Francis Boleslav Zdrubek and after his death by R. Jaromir Psenka celebrated its fiftieth, in 1935, after the death in 1930 of its founder, August Geringer, its sixtieth anniversary.

In 1891 another daily newspaper, the "Denni Hlasatel" (Daily Herald), was founded. It is very ably edited and enjoys a wide circulation. The socialist 'Spravedlnost' was published since 1905 as daily, to be changed later on, in 1931,to a weekly.In May, 1935, there was published by the District Alliance of Czech Catholics in Chicago an almanac bound in golden paper covers, to commemorate f i f ty years of cultural work of the Czech Benedictine Fathers of the St. Procopius Abbey at Lisle, Illinois. I t is a touching souvenir book, vividly describing the manifold activities of the learned members oé the O. S. B. during the last five decades. The Benedictine fathers arrived in Chicago on March 2, 1885, and made the St. Procopius Church, located on 18th and Allport streets their headquarters. They not only helped their people in their religious faith but also taught them how to preserve their Czech heritage.

To that end they contributed mostly through the instrumentality of Czech Catholic newspapers and periodicals, principally, the semi-weekly "Katolik", the daily "Národ", the children's weekly "Pfítel Dítek", "Hospodáfské Listy" and "Vúdce". In an English and Czech publication issued at the occasion of this golden anniversary with the title of "Three Score Years of Church Activities — An Historical Sketch of St. Procopius Parish, Its Contributions to Chicago's Social and Religious Life", more detailed information is contained. It is a valuable compendium of historical facts and events in connection with the development of the said parish. It shows that St. Procopius Church was the third parish to be organized in Chicago. It was preceded by the St. Wenceslaus and St. John Nepomuk Parishes. The writer says as follows (Chapter II.) : "The first Czech priest in Chicago seems to have been Rev. Alois Hatala, who in 1859 became Pastor of St. Michael's Church. It was on August 14, 1863, when 85 Czech families of Chicago decided to build a church of their own, St. Wenceslaus at Des Plaines and De Koven streets. The building was started August 25, 1864, and soon a school was added. The parish flourished and the church had to be enlarged......"

Encyclopedia of Chicago Online - the history of Czechs in Chicago