The First Czech in Chicago

Who was the first Czech to reach and live in Chicago?  It could be a question without a definitive answer, but it is an interesting question.  I found an article written by Miloslav Rechcigal Jr.  Wikipedia has posted a good summary of Miloslav: “Miloslav Rechcigl, Jr., or Mila Rechcigl, is a trained biochemist, nutritionist and cancer researcher, writer, editor, historian, bibliographer and genealogist. He was one of the founders and past President for many years of the Czechoslovak Society of Arts and Sciences.” (https://en.wikipedia.org/wiki/Mila_Rechcigl).  Miloslav Rechcigl, writing for his organization presented one of the most comprehensive attempts to discover who the first Czech in Chicago was.  (https://www.svu2000.org/cs-america/chicago-1st-czech/).

Rechcigl states, “According to Thomas Capek’s classical book The Czechs (Bohemians) in America (1920), the first groups of Czechs began filtering into Chicago in 1852- 53. Similarly, a noted Czech American journalist Frantisek Boleslav Zdrubek, who lived in Chicago since 1875, stated in his first published study about the Chicago Czechs that the Czech settlers began arriving with the year 1853.

We must assume that both authors were referring to a mass migration to that city rather than to the arrival of individuals, inasmuch as both authors were aware of the fact that some Czechs lived in Chicago already before 1850, although they did not mention specific names.”

Paul Nemecek, writing for the Koreny, the journal of the Czech and Slovak Genealogy Society of Illinois, (Early Bohemian Settlers in Chicago, pages 11 to 16, Koreny, September 2004), published information from the Dejiny Spolku Storych Ceskych Osadnika v Chicagu (Bohemian Old Settlers Association Tenth Anniversary – 1908), a list of Czechs and the years they arrived. But this list only includes those who were members of the Bohemian Old Settlers Association.

Referencing the Habenicht book, Rechcigl continues the search: “Jan Habenicht in his Czech publication Dejiny Cechüv americkych (History of American Czechs) published in Si. Louis in 1910, categorically wrote that the first Czech settler in Chicago was a Moravian native Dr. Frantisek Adolf Valenta. (Listed in the book on page 386.) This claim was generally accepted even by such eminent scholars as Professor Francis Dvornik.

Dr. Frantisek A. Valenta originally came to America in 1849 and, after a brief stay in New York City, he settled in August of the same year on the north side of Chicago. Later on he established a pharmacy on the corner of State and Van Buren Streets. His knowledge of German enabled him to practice medicine especially among Germans. After fourteen years of medical practice, he was quite rich and returned to Bohemia, reportedly with some $50,000. There he purchased a farm and in 1870 he died. Habenicht harshly criticized Valenta’s German orientation, however, if we look at it from a different perspective, we ought to give him credit for his entrepreneurship and be comforted by the fact that his presumed riches did not come from the back of poor Czech settlers.”

The Library of Congress Czech timeline lists Valenta as the first Czech to Chicago.
1849 - Francis Adolph Valenta, a Moravian doctor of medicine, left for America. He was probably the first Czech immigrant to settle in Chicago, where he practiced medicine and owned a pharmacy. (https://www.loc.gov/rr/european/imcz/ndl.html)

Using Ancestry, and searching only for those individuals born between 1780 and 1800 in Bohemia, there is a listing of 90 individuals.

“Another Chicago resident Anton Pergler claimed two years earlier in Pamatnik Spolku ceskych osadniku v Chicagu (1908) that the first Czech settler in Chicago was Joseph Chvil who arrived in the city in 1843. Subsequently it was learned that this was a mistake, based on the erroneous assumption that the family name Chiville of the settler originated from a Czech name Chvil.

The earliest existing reference to Chicago Czechs was made in 1888 by Josef Pastor in Hamburg, Germany in his Czech magazine Ceské osady v Americe (Czech Communities in America). He included the following passage: “We have received an announcement from Chicago about the death of one of the oldest, if not the oldest, Czech American settler Vojtéch Skliba who came to America in 1846 and lived in Chicago for 42 years.” Rudolf Bubenicek, the author of Dejiny Cechü v Chicagu (History of Czechs in Chicago), published in Chicago in 1939, who came across this reference, made an effort to verify this information. Although he did not find such name in any Chicago directories, he eventually succeeded in tracing Skliba’s descendants under a modified name Skleba. Specifically he found the following entry in one of the city directories: “Skleba L.F., M.D., 2215 Addison St.” Actually such a transliteration makes some sense since phonetically the Czech name Skliba would be pronounced in English as Skleba or Schkleba.

Upon contacting Dr. Leonard Skleba, the information was indeed verified. The original settler Vojtech Skliba who in America used Albert as his first name, had a son Frank who did not know Czech too well and changed his name to Skleba. According to family history, Vojtech Skliba settled in Chicago with his mother when he was only twelve years old. In Chicago he learned the saddler and harness trade and established a shop on Michigan Street between State and Dearborn. In addition he also maintained a cartage business and employed as many as fifteen employees. He married a Czech woman by the name of Josefa Kucerova with whom he had several children, including Joseph, Albert, Robert, Emil and Frank. Vojtéch SkIiba died on April 24, 1888 at the age of 54 years. He had apparently also had a brother and a sister. His brother’s son, who wrote his name John T. Skliba, lived in Santa Fe, New Mexico and his sister married Vyskocil and lived in Traverse City. Michigan.”

Find A Grave has a posting for Albert Skleba (149071976) (Family Search lists death at 131 Dearborn Avenue) and Josephine Petran Skleba (149072073) buried in Graceland Cemetery in Chicago.

Rechcigl, in his posting, indicates that he feels he probably found the first Czech to Chicago.

“After several years of diligent search, the present author can now report a discovery of another Czech settler who came to Chicago four years prior to the arrival of Vojtech Skhba. The person in question is Henry Homer who established the oldest wholesale grocery house in Chicago. He was born in the town Ckyne, near Prachatice in Southern Bohemia on December 29, 1818. After settling in Chicago in 1842, he started in the grocery business at the northeast corner of Randolph and Canal Streets. At that time the farmers brought their produce from the country in exchange for groceries, this constituting the main business of that period. In 1861 he moved his grocery store to 267 South Water Street, at the same time establishing a bank at the southeast corner of Randolph and La Salle Streets.

When the infamous Chicago fire of 1871 came, both of his business houses, as well as his residence at Jackson Boulevard and Wabash Avenue were burned to the ground. Not being discouraged by these losses, he started business in his own building at 78 West Randolph Street, a business which has grown to gigantic proportions. He was generally known as “Uncle Henry” by his business associates on the Chicago Board of Trade of which he was a charter member.

In 1849 he was married to Hannah Demburg, by whom he had eleven children: Dilah, Joseph, Isaac, Angel, Minnie, Charles, Dora, Maurice, Henry, Albert and Mattie. Both Henry Homer and his wife were residents of Chicago until the end of their lives. Henry died in 1878 leaving a dual responsibility to his wife, tat of rearing their minor children, and of carrying on a business destined to advance to that very forefront of Chicago mercantile enterprises.

The business of Henry Homer & Co., founded in the early forties, continued its rapid growth, eventually occupying the entire half block on Randolph Street between Clinton and Jefferson Streets. After Hannah Homer’s death in 1902, the business was conducted by Homers’ sons. Subsequently it was reorganized under the corporate name Durand, McNeil, Homer Company which occupied leading position among the wholesale grocery establishments in America.

Henry and Hannah Homer left behind them numerous descendants, many of whom attained a high level of distinction. The most illustrious of them was their grandson, Henry Homer (1878-1940), namesake of the founder of the family, Probate Judge of Cook County since 1914 and then two-time Governor of Illinois (since 1932). He was one of the best governors Illinois ever had. Homer was well aware of his Bohemian background and was proud of it. The Czech community of Chicago was aware of it as well and their vote for him was, in part, responsible for his tremendous victories at the polls.”

In a second article written by Rechcigl, the author provides additional information on Henry Homer, using his other known name Henry Horner. (https://www.geni.com/projects/Czech-Bohemian-American-Jews/14626)

“Henry Horner (1817-78) was the first Bohemian Jew, and one of the first four Jews to settle in Chicago. He came to America in 1840, and, was hired in Chicago as a clerk for a clothing house, where he remained until he opened his own wholesale and retail house, Henry Horner and Co. His company started at Randolph and Canal Streets. In 1859 Horner built a large store at Nos. 78, 80 and 82 West Randolph Street, and in 1864 he moved his business to South Water Street. His grandson, bearing identical name Henry Horner, became governor of Illinois.”

There are records for Henry Horner.

A possible immigration record is Henry Horner, about 20, departed Liverpool and arrived at New York City on June 20, 1844, aboard the ship New York Packet.

"The first Jewish settlement in Illinois was in the City of Chicago.

The Festival of the Old People.  (This article lists an even older settler)

Chicago's old settlers held, yesterday, a festival in Ogden Grove. Between 7,000 and 8,000 people enjoyed all kinds of entertainment during the day and in the evening, when the prizes were distributed, the attendance was over 10,000 people. Around 2 P.M. the festival commenced with the writing of the signatures in the "Memorial Book." Only those settlers were allowed this privilege, who have lived in Chicago not less than twenty years, and who are over thirty-five years of age. This being done Em. Hochster, then introduced a very old judge, white-haired J. D. Caton, who came to Chicago fifty years ago in 1833. Chicago was incorporated in July, 1833, and Mr. Caton and Bill Carpenter are the only two Bohemians who participated in the ceremony of incorporation.

Old Judge Caton gave a short review of the history of Chicago and its first years of development. His narration was interwoven with many very interesting and humorous episodes. At the time of the incorporation of Chicago there were only three girls in town. One of them is still living, her name was Miss Gray, but she has been grandma for a long time and is always merry.

In 1834 Mr. Caton was elected Justice of the Peace, although he had never held that office before that time. He performed his first weddings on the North Side and twenty years later he untied some of these couples. Ordinarily he charged only three dollars ($3) for the certificate of marriage and it was so reasonable that all couples wanted to be married by him. In 1837 he was elected an alderman of the 3rd Ward and because of that, he became a member of the first City Council. Following are the names of the oldest settlers, who participated in the festival: 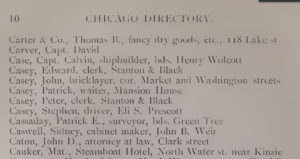