(William used as first name in many records) 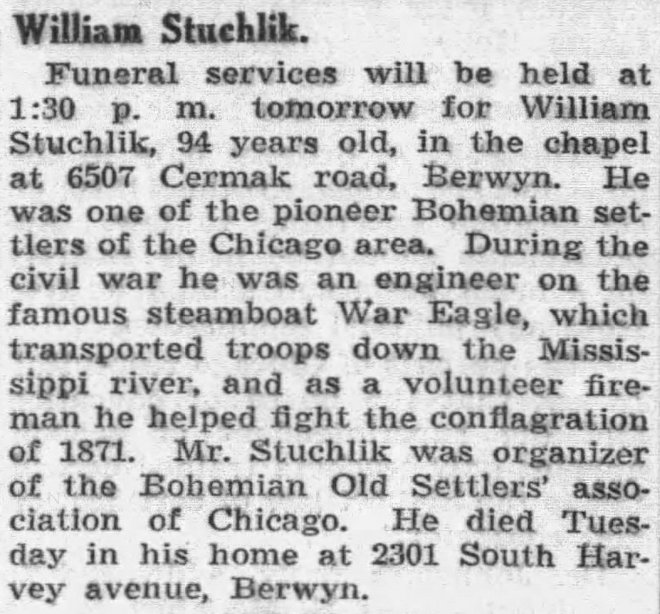 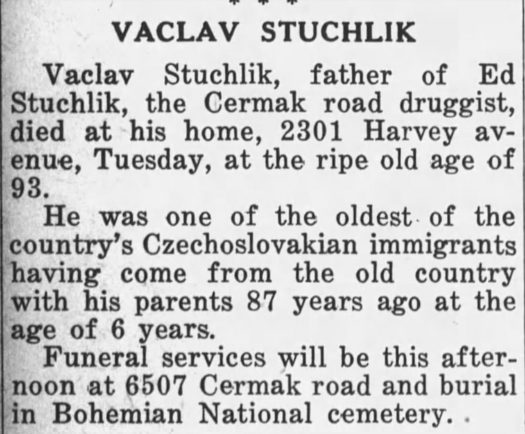 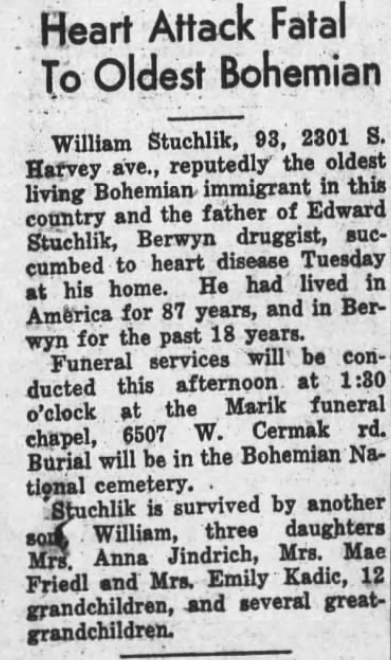 Several versions of how the Stuchlik family (Joseph, Mary and son Vaclav) reached Chicago have been found.  Ancestry lists arrival in Chicago in 1854.  Ancestry references the Habenicht book as its source. That book describes Joseph as one of the earliest Czech settlers in Chicago in 1854. ("Dejiny Cechuv Americkych", Jan Habenicht, Hlas Publisher, Saint Louis, Page 568.)  An article in the Amerikan Kalendar of 1939 describes that the family first landed in Canada, and then made their way to Chicago. ("Nejstarší český osadník Chicaga Václav Stuchlík zemřel 22. března 1938, ve věku 93 let.", Amerikan Kalendar, August Geringer Publisher, Chicago, Illinois, Page 221.)  An article found in "History of Cook County", Volume 2, Pages 718 to 721, lists arrival in 1853 in Canada, and 1854 in Chicago ( Editors: Weston A Goodspeed and Daniel D. Healy, published by Hammond Press in 1909).

"Václav Stuchlík, who died on March 22, 1938 in his home in no. 2301 Harvey Avenue., Berwyn, in the midst of all his five living children aged 93 years and six months. The peaceful death ended in a one-week illness only; until this time, old Mr. Stuchlík was physically and mentally healthy. Due to his very advanced age, he directly surprised his family and numerous friends with his alertness and futility. He was of a cheerful social nature, he liked to dress up and go out on the street and to visit either relatives or acquaintances. He has lived since 1893 on a well-deserved rest and is well-economically well-suited, able to fill almost half of his life with pleasant and balanced days. After many years of common and very happy life, he lost his wife Markéta, who was called a single Režná, for seven years. She gave him six children, Anna, married to Jindřich, William, Maria, the wife of the famous florist Friedl, Edward, Emilia, married Kadičová and John. All the sons became well-known medical disciples, but John preceded his father about two years ago.

Václav Stuchlík came from Všenor near Prague in Bohemia, where he was born on October 15, 1844. When he was 9 years old, his parents, father Josef, trained in the craft of masonry, and his mother Marie, from the Velebil family, went out with him to sea. . The family sailed to Canada and then set out for Chicago. She had brought a groschen, sold in an old homeland with a cottage and some fields, and could dare to rent a small farm with a simple wooden building very close to the city, in the muddy wastelands on Clark and Van Buren streets, in today's loop itself, that is, business center of the city. From there, after three years, contagious cholera drove them to another farm, Dearborn and 12th Street, where the soil was less muddy. But when Chicago seemed to be plagued by epidemics for many years, the family fled to the healthy state of Wisconsin, where they settled in the rainforest at Eastman in Crawford County. The danger of disease passed away there, but life in the wilderness was full of toil and other inconveniences. In the winter, for example, they were forced to provide free food to wandering Indians. After countless difficulties, the family moved to Chicago.

She found an apartment on Clinton Street, near Taylor. Old Stuchlík became a bricklayer and Václav went to school, first general school and then to a German one in a Catholic settlement. He soon began to learn mechanical engineering, which he kept until he started a business. During the Civil War, he also engineered the ship War Eagle, which imports troops from the "Father of Waters," as the Redskins called the Mississippi River.

A year in Old Pilsen, on Fisk and 18th Street After twelve years of successful trading, he was able to build a 50-foot-wide and three-story high house on the Nutt court and 18th Street, where he remained in the same shop until the show year.

The association of old Czech settlers, which he helped to found, had one of the most active members, directors and officials in Václav Stuchlík. His wife also devoted a lot of time and interest to this association alongside him. They are now resting side by side in our beautiful Czech National Cemetery."

This article was found in "History of Cook County", Volume 2, Pages 718 to 721, Editors: Weston A Goodspeed and Daniel D. Healy, published by Hammond Press in 1909.

"William Stuchlik, now. living a retired life from active business pursuits at 1915 South Ridgeway avenue, was born in Bohemia, October 15, 1844. His parents, Joseph and Mary (Velibil) Stuchlik, immigrated to America in 1853, first locating in Canada, subsequently, in May, 1854, establishing a home in Chicago at Clark and Van Buren street, where they resided three years. Mr. Stuchlik then leased land at Twelfth and Dearborn streets where he continued the same business until 1859, then moving to a farm near Eastman, Crawford county, Wis. Tiring of backwoods life, he returned to Chicago with his family in 1862 and lived at the corner of Clinton and Taylor Streets and here worked at his trade of mason and in a lumber yard until his death. William Stuchlik, the subject of this sketch, is the only child living born to his parents. After ten years of age he has lived in the United States, his education having been acquired in the public and_ German Catholic schools of Chicago. When seventeen years old he was apprenticed to the machinist's and engineer's trade, serving five years, and during the civil war acted as assistant engineer for three months on the steamer "War Eagle," plying on the Mississippi river. From then until 1881 he worked at his trade in Chicago, the succeeding twelve years being passed in the grocery business at Fisk and Eighteenth streets. He then continued in the same line at Eighteenth street and Nutt Court until he retired from active business pursuits in May, 1895. Mr. Stuchlik is remembered by the old settlers and by those who know him as an honorable, industrious citizen and a credit to the city. He married Margaret, daughter of William and Anna (Brabec) Razney, natives of Bohemia, who settled in Chicago in 1867, and to them have been born seven children: Anna (now Mrs. Frank Jindrich), William A., John, Frank (deceased), Mary (now Mrs. James Friedl), Edward and Emily (the wife of Joseph Kadec). Mr. Stuchlik, on matters of national importance, is a Republican. He and wife are members of the Bohemian Old Settlers' association of which Mrs. Stuchlik has been vice-president since 1899.

William A. Stuchlik, a prominent pharmacist of 1758 West Twelfth street, is a representative of one of the pioneer families of Chicago and perhaps the first Bohemian family to settle in Cook county. William Stuchlik, his father, appropriate mention of whom appears elsewhere, was the only child of Joseph, the pioneer. William A. Stuchlik was born in Chicago, at Thirty-ninth street and Wentworth avenue, July 14, 1872, and attended in youth the public schools, the Lutheran German grammar school and the Cook County Normal school. In 1904 he was graduated from the Chicago College of Pharmacy and the following year embarked in the drug business in partnership with his brother John. He thus continued until 1899, when he engaged in the business alone at the corner of Eighteenth and Wood streets. Ability and natural aptitude in his profession has brought him success in a marked degree. On October 24, 1905, he married Louise, daughter of Frank and Antonia (Kvasnicka) Kreml, of Chicago, and they are the parents of one daughter, Helen, born in 1906. Mr. Stuchlik is a member of the Chicago Retail Druggists' association, the Social Drug club, the Masonic fraternity, the Bohemian club and the Dobrosky, an organization composed of Bohemian Masons. In politics he is a Republican on national issues and is active in party affairs.

Edward Stuchlik, a prominent and successful pharmacist at 1012 W. Eighteenth street, was born in Chicago, May 11, 1883, and is a son of William and Margaret (Razney) Stuchlik, pioneer Bohemians of Chicago. He was reared in this city and educated in the public schools, the Medill High school and was graduated in pharmacy from the University of Illinois in 1904. From 1902 to 1904 he served as assistant pharmacist in various drug stores of this city and after his graduation was employed for a year and a half in the chemical department of Armour's laboratory and later for the same period was manager of the drug department of the Fair, Charles H. Fitzner, J. S. Stiles and others. In 1907 he embarked in business for himself at his present location in the drug store which had been founded by his brothers.William A. and John, in 1894.  He now has one of the best equipped drug stores in this part of the city and his trade is large and his reputation excellent. At the present time he is teacher of pharmacology and chemistry in the College of Physicians and Surgeons. This fact is so notable and unusual as to be worth special attention. He is a member of the National Association of Retail Druggists, Illinois Pharmaceutical association, the Alumni association of the Chicago College of Pharmacy and is a shareholder in the Chicago Wholesale Drug company and the Asepta Product company. He is also a member of Arcana Lodge No. 717 of the Masonic fraternity."

Joseph and Mary Stuchlik in Chicago

While Habenicht's book, and the Amerikan Kalendar article, reference Joseph and Mary Stuchlik in Chicago.  Only bits of information, some unverified, provide any other records of them in Chicago.

The Illinois Secretary of State Death Database lists the death of a Joseph Stulick on September 23, 1881, at 78 years.  Family Search lists the burial at Cook County Cemetery, most likely, Dunning Cemetery.

The Illinois Secretary of State Death Database, Family Search, and Ancestry.com all list the death of a Mary Stuchlik on November 12, 1895, with no other information. 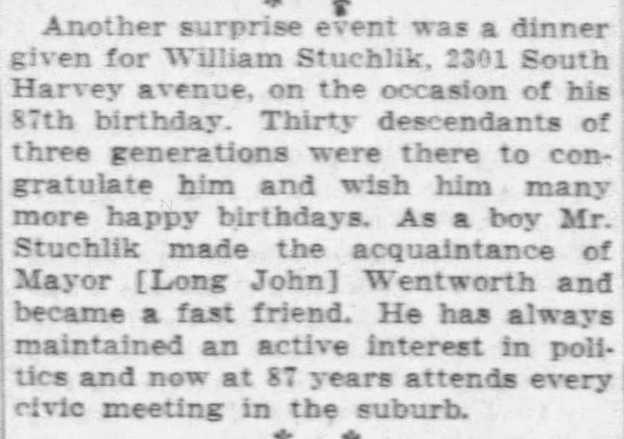 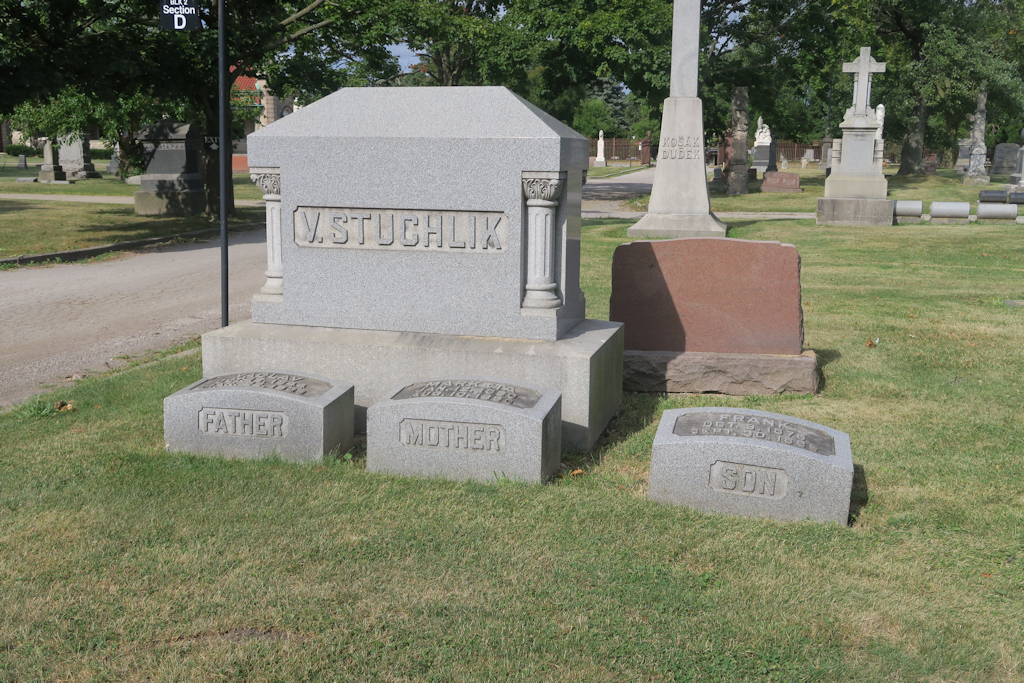