In 1900 he was married, and living with his family with multiple boarders in the same building (528 W. 18th) and having his butcher shop on the bottom floor.

Also in 1900 Joseph Liska had rented space at 592 West 18th Street for a new store and living location.

In 1901 he, with two partners, incorporated and began to do business as the Bohemian Butchers Association.

In 1905 he was listed as a person in the incorporation of the Bohemian Bazaar Co-operative department store venture.

In 1905 The Chicago Packing Company was already buying property for their business.  (Note in 1909, with the City of Chicago Street Re-numbering project - 44 - 46 North Peoria would become 216 to 222 North Peoria.)

While the Chicago Packing Company was developing as a business, Joseph Liska's home address would change and his own butcher shop along with it. 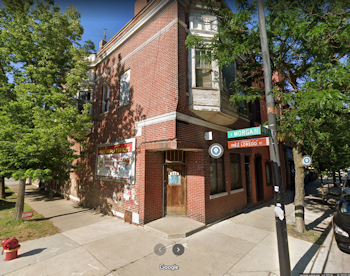 "Pilsen had many meat-packing firms, sausage factories, and butcher shops, also frequently housed in buildings with flats above. The Loeb Brothers had two locations in Pilsen between the late 1880s and early 1900s. One was an expansive operation at 1915- 1923 S. Blue Island Ave. where they presumably ran their meat-packing operation, and a much small corner storefront at 952 W. 18th St., which was likely a butcher shop. Both buildings had residential apartments on the upper floors." (1)

"Joseph Liska, a butcher who, in 1900 rented a space for his business and lived in the apartment above, managed to purchase the structure several years later. In 1907, he replaced the older structure with his own mixed-use building at 1328 W. 18th St. designed by architect Anton Charvat. Along with his butcher shop and an apartment for his own family, Liska rented units to four other families." (2)

Charvat also produced a 1907 mixed-use building at 1328 W. 18th St. that provides a hint about its owner’s profession. Clad entirely in smooth limestone, the four-story structure has a subtly projecting bay on one side that is topped by a tall bell-shaped parapet. Restrained foliate ornamentation stretches above triple windows on the second story and the inner part of a fourth story pediment. A sculptural cow’s head projects above the third story triple windows. The cow represents the profession of the building’s owner, Bohemian-immigrant butcher Joseph Liska.

In the 1910 Census, the Joseph Liska family (Joseph, Katie, daughter Bertha, mother in law, Anna Horazdovsky, and a boarder, also a butcher, Alex Hotek are listed as living at 1328 W. 18th Street.  Joseph is listed as a butcher, owning his own shop.

Listed in the same building are four other families.  Three of the men in those families are also listed as butchers. (3))

(Note building is located within the Pilsen Historical District) 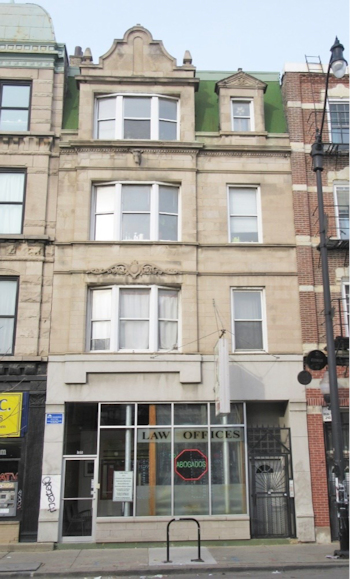 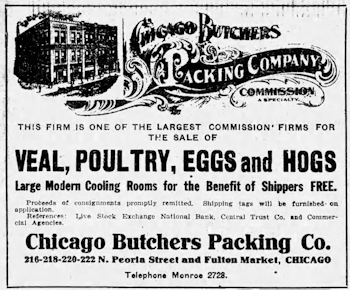 1912 is the earliest advertisement for the Chicago Butchers Packing Company found (so far) in a newspaper. 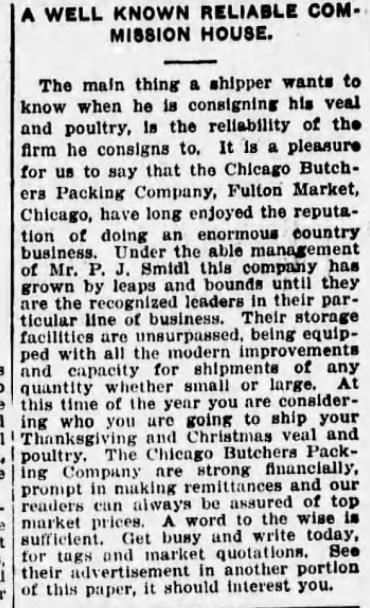 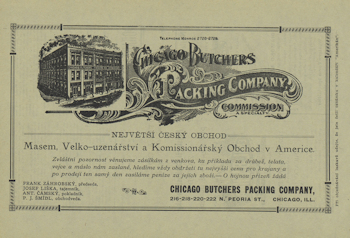 We pay special attention to shipments from the countryside, for example for poultry, calves, eggs and butter sent to us, we are always looking to receive the highest price for compatriots and after the sale the same day we send money for their goods.

In company advertisements in the Amerikan Kalendar, August Geringer Publisher, Chicago, Illinois for 1918, 1921, 1923, 1925, 1926 and 1927 these same four men are listed as officers of the Chicago Butchers Packing Company: 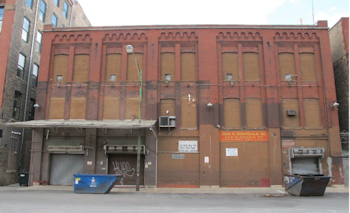 In 2015, the Commission on Chicago Landmarks designated the the Fulton - Randolph Market District for Landmark status.

Found on page 35, of that Landmark decision, is the building once occupied by the Chicago Butchers Packing Company.

Click here for a PDF file of that document explaining all the area contained within this landmark district. 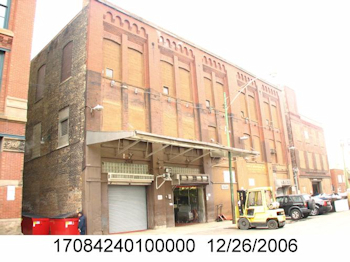 Above is a 2006 image of the building which once housed the Chicago Butchers Packing Company.

Click here for a link to the web page associated with this image. 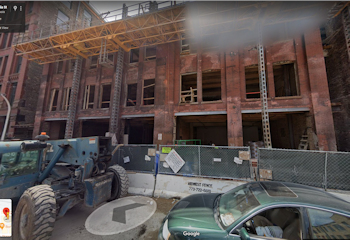 Image above from Google Maps October 2020. 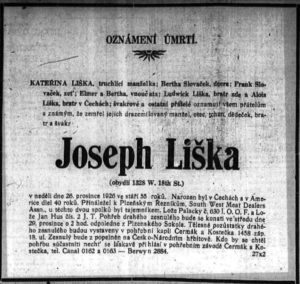 In the 1920 Census, Joseph and his wife Kate, are still living at 1328 West 18th Street.  There is no occupation listed for Joseph.  There are a total of eight heads of households listed as living in the same building. (4)

One of those households is Frank and Bertha Slovacek.  Frank married Joseph and Kate's daughter, Bertha, in 1919.