"The well known Bohemian brewing company, Atlas, did not neglect to make its customary monetary contribution, of considerable amount, for some honorable purpose. This year, as a Christmas gift, it donated to the Old Peoples Home the sum of $100, with the hope that this welfare institution should be host to the old people, who will seek and find refuge therein, in the near future. The above mentioned gift was delivered to the Home by Karl Vopicka, President of the Atlas Brewery and member of the Chicago School Board. The Board of Directors of the Home accepted the gift with great pleasure, and will not forget to give whole-hearted thanks, in an appropriate place and time,to the honorable donors whose ranks should grow more rapidly."

"The Bohemian Atlas Brewing Company is always in the lead where support of Bohemian nationalistic or humanitarian undertakings are concerned. A check for $100 as a christmas gift to the Old People's Home, was sent last Tuesday, to the treasurer of the Home, Mr. Vaclav Mlnarik, of 69 West 20th street.

At the present time the Home is the foremost and most important Bohemian undertaking in Chicago and is deserving, in every respect, of the support of all Bohemian firms and individuals. The example of the Atlas Brewing Company ought to find many followers."

"Important changes will take place in the composition of the board of trustees of the Cesko-Americka Nemocnice (Bohemian-American Hospital) after the recommendations of the present board are approved by a special plenary meeting called for this purpose. We do not doubt that these changes will prove of benefit to the hospital.

Mr. Otto J. Kubin, a member of the board of trustees, sent in a letter which was read at yesterday's meeting and in which a check for $1,500 was enclosed. The letter explained that $500 pays the obligation of the Atlas Brewing Company, $500 is Mr. Charles J. Vopicka's obligation, and $500 is Mr. Otto J. Kubin's own contribution."

Meeting of the Board of Directors of the Bohemian Charitable Association 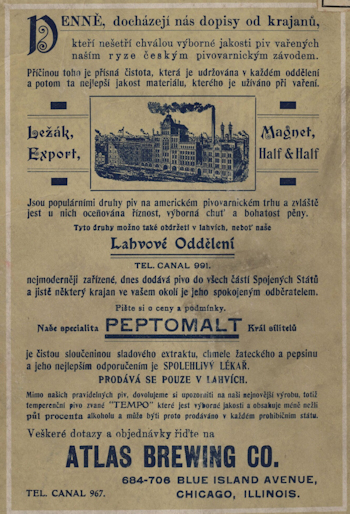 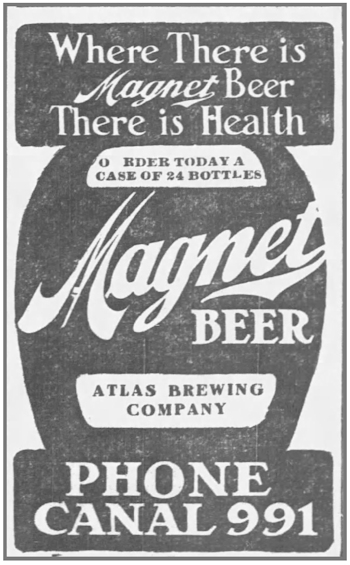 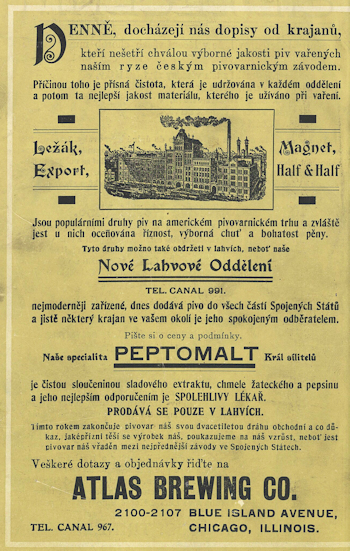 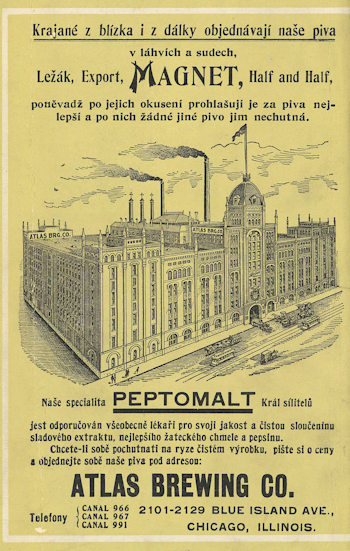 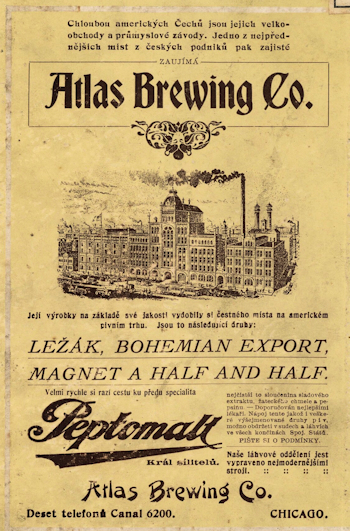 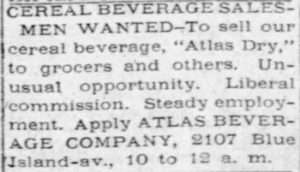 "Atlas remained open during Prohibition as the Atlas Beverage Company producing near beer and soft drinks and exploiting its bottling capabilities." (https://www.buttonmuseum.org/buttons/atlas-prager-beer)

(These may be temporary links - web pages with items for sale - but an image of the logo for Atlas Root Beer - http://www.usbeerlabels.com/beer-labels/atlas-root-beer/585/ 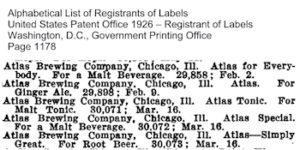 "During the prohibition years, Chicago issued two permits for breweries. The first was U-Permit, which allowed the production of near-beer which had no alcohol. After the sixth year of prohibition, L-Permits were issued to six Chicago breweries. These allowed the production of beer that contained ½% alcohol." - (https://chicagology.com/breweries/prohibitionbeer/) Atlas Beverage Company was issued both types of permits

Six Images Below - Advertisements by Atlas Beverages during the Prohibition 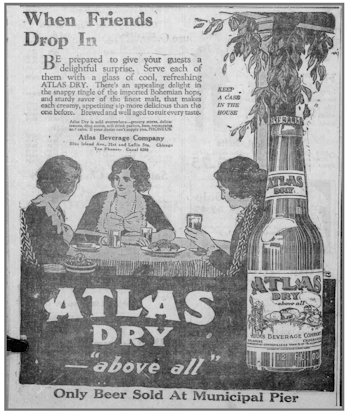 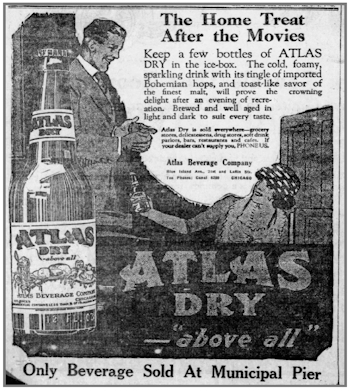 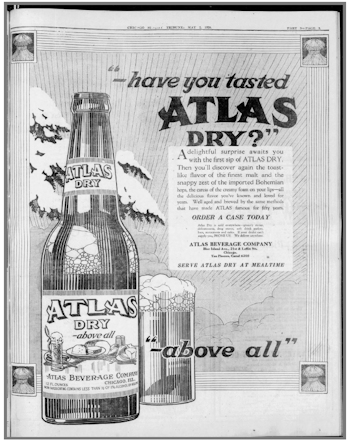 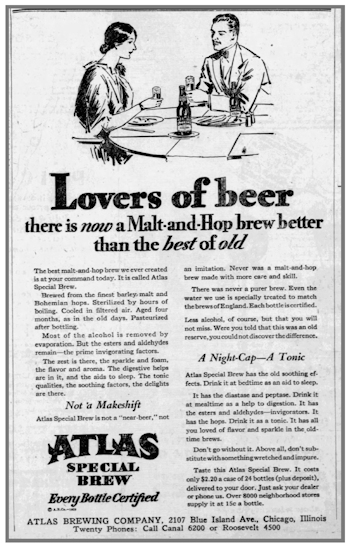 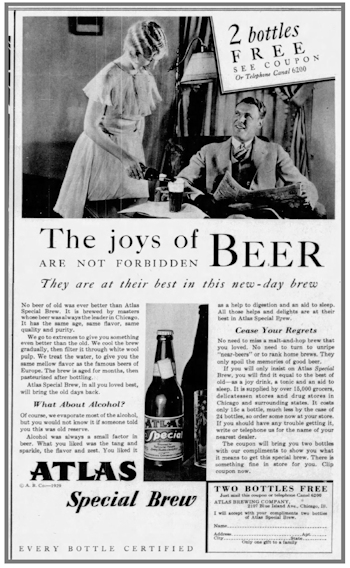 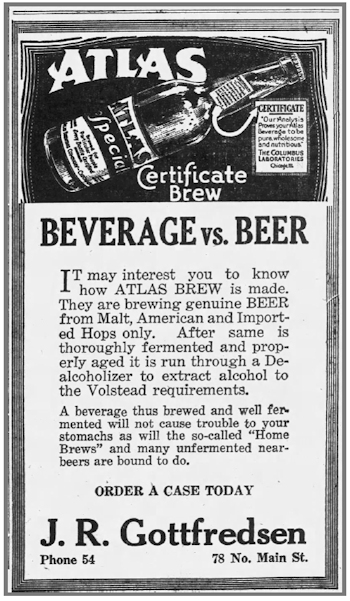 The end of Prohibition

Nearly Million Cases of Beer Ready in Chicago by April 7 -  The bottling of beer began in earnest yesterday as Chicago's seven breweries were planning to meet the flood of orders calling for immediate delivery after 12:01 a. m. April 7. Four breweries, those of the Atlas, Prima, the United States and the Schoenhofen companies, are now bottling, and the other three expect to begin by Saturday. By April 7 the breweries expect to have almost a million cases ready. The hope that the reception for legal beer will not be disorderly, giving the drys a chance to say " I told you so " and hampering the chances of repealing the 18th amendment, was expressed by Anton Laadt, general manager of the Atlas company.

Force Beer on Nobody.

"We are not forcing beer upon anybody," said Mr. Laadt- "We should prefer to wait until the next day to start making deliveries. But the public demands It and we must give service. We have so many orders from hotels, clubs, and restaurants calling for immediate deliveries that we must begin at 12:01 o'clock. We are hoping that the celebration will be orderly and that if some people who cannot wait get drunk on whisky and gin the result will not be blamed on beer. We are not worried about the beer, for it Is non intoxicating."

H. F. Ernst, president of the Prima company, said he did not believe there would be any more drunkenness than usual and that if there is any drunkenness it should not be blamed on beer. 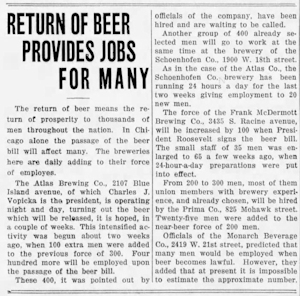 Employees of the United States brewery, 2600 Elston avenue, decorated the building with flags and bunting and placed a huge picture of President Roosevelt over the entrance. This was to express their appreciation of being put back to work. There were 300 on the Job, as compared to fewer than 75 before the passage of the beer hill. It 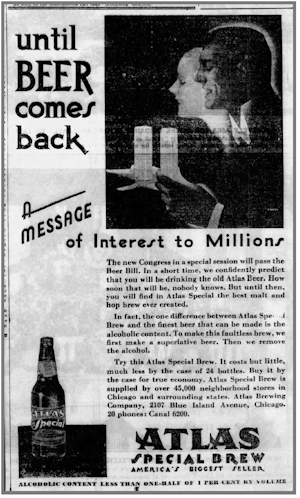 is estimated that about 1S.000 men and women have received work in Chicago breweries and related Industries as a result of the beer bill. (Clipping - Return of Beer - Newspaper Chicago Eagle Saturday, March 23, 1933, Page1)

Charles J. Vopicka. founder of the Atlas Brewing company and former minister to the Balkan states, announced yesterday that the first case of beer bottled by his company would be rushed to President Roosevelt by airplane Immediately after 12:01 April 7. The Anheuser-Busch brewery of St, Louis and other nationally known concerns also will send the first case to the President.

Although the breweries have not fixed definite prices on their products because of the uncertainty of pending tax and licensing legislation, both state and city, they are already solicit ing borne delivery orders at prices prevailing upon delivery. Chicago representatives of the Pabst and the Schlitz breweries of Milwaukee are soliciting home delivery orders at a maximum price of $2.60 a case. Tentative prices mentioned by salesmen for the Chicago breweries are as low as $2.40, but all prices are subject to change upon delivery. It is generally agreed, however, that they will be no more than $2.60 and no less than $2.40. A deposit of $1 for return of the bottles will be required upon delivery."

A new pretzel factory has been opened by Paul Boaman & Sons at 952 North Cicero avenue, and 25 girls were busy there yesterday, each bending and tying 60 pretzels a minute. (Ad Right - Until Beer Comes Back -Chicago Tribune Sunday, March 5, 1933, Page 4)

Chicago hotel men will discuss prices of beer, deliveries and general celebration plans at a meeting this after noon in Hotel Sherman.

The flrst application for a permanent brewery permit was received by E. C. Yellowley, supervisor of permits, from a Green Bay, Wis., concern yesterday. A temporary permit granted to a Peru, Ind., company brought the total now authorized to make beer in the district to 33.

The Women's Christian Temperance union plans no court test of the constltutlonality of 3.2 beer, but will launch an educational campaign against its consumption at the natlonal convention in Milwaukee, city of breweries, June 30. This was announced yesterday by Mrs. Margaret C. Munns. national treasurer. 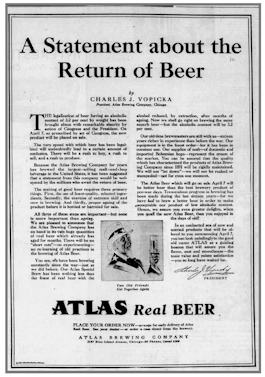 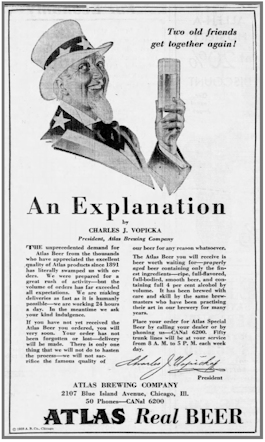 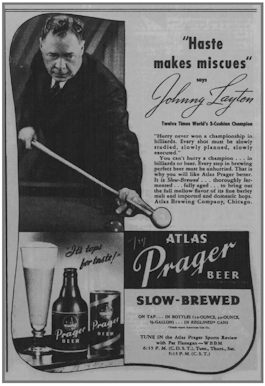 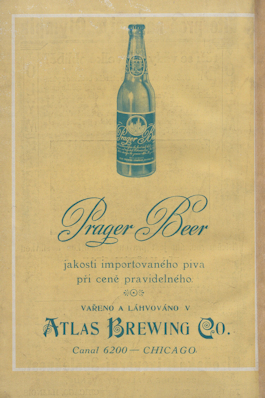 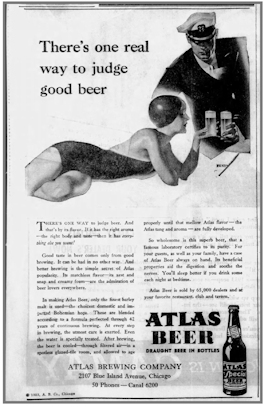 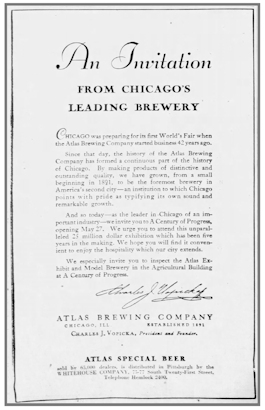 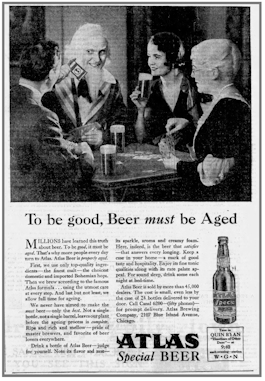 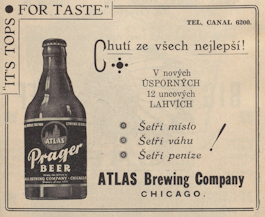 " Charles J. Vopicka, his brother-in-law Otto Kubin, and John Kralovec founded the Bohemian Brewing Company in Chicago in 1891, and renamed it Atlas Brewing Company in 1896. Atlas remained open during Prohibition as the Atlas Beverage Company producing near beer and soft drinks and exploiting its bottling capabilities. When Prohibition was repealed, Atlas Brewing Company received the first license to resume brewing of real beer in the Northern District. However, prior to this Vopicka's original partners had died and the company wasn't profiting after the initial boom in business from the repeal despite the large appeal of Atlas Prager Beer. This was followed by Vopicka's death in 1935. All of this lead to the company going into receivership in the late 1930s.

In 1940, after a bankruptcy reorganization Louis Kanne became the majority stockholder and CEO of Atlas Brewing Company. He merged the brewery with Schoenhofen-Edelweiss brewery but each brewery kept its original name. This did not prove as profitable as was hoped and led to the purchase of both breweries by Drewrys. They continued to operation until 1962 when Atlas Brewing Company was closed permanently. "

In 2007 the Czech Consul in Chicago posted a PDF file related to Bohemian breweries in Chicago and the Czech Beer festival of that year.  This is a link to that online PDF file