"Pilsen" was a nickname applied to the area south and west of "New Prague", which became the new area for Czech settlement after the Chicago Fire.

North and South Lawndale would become Chicago neighborhoods filling with Czechs as they moved outward from the original Czech communities. 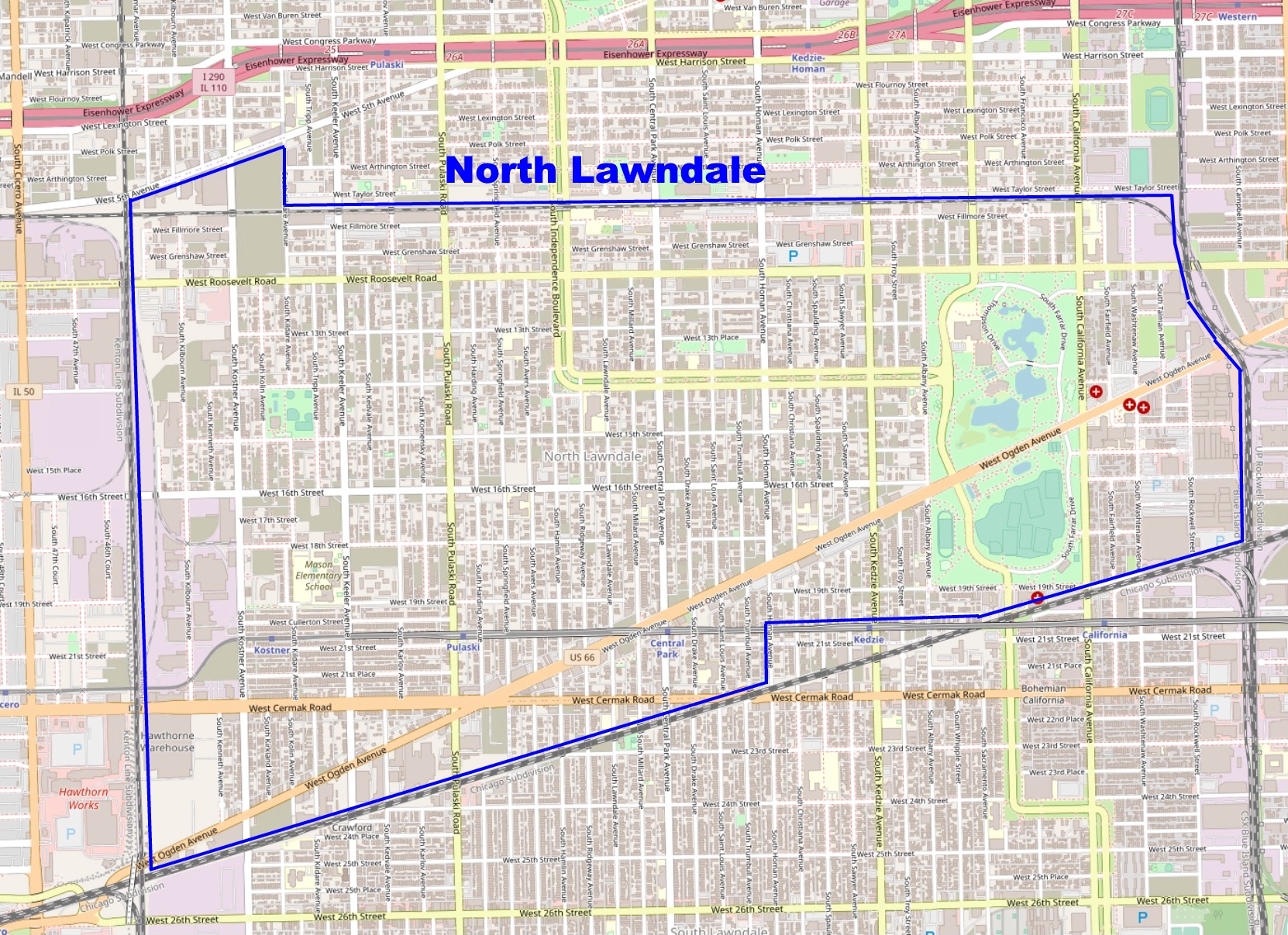 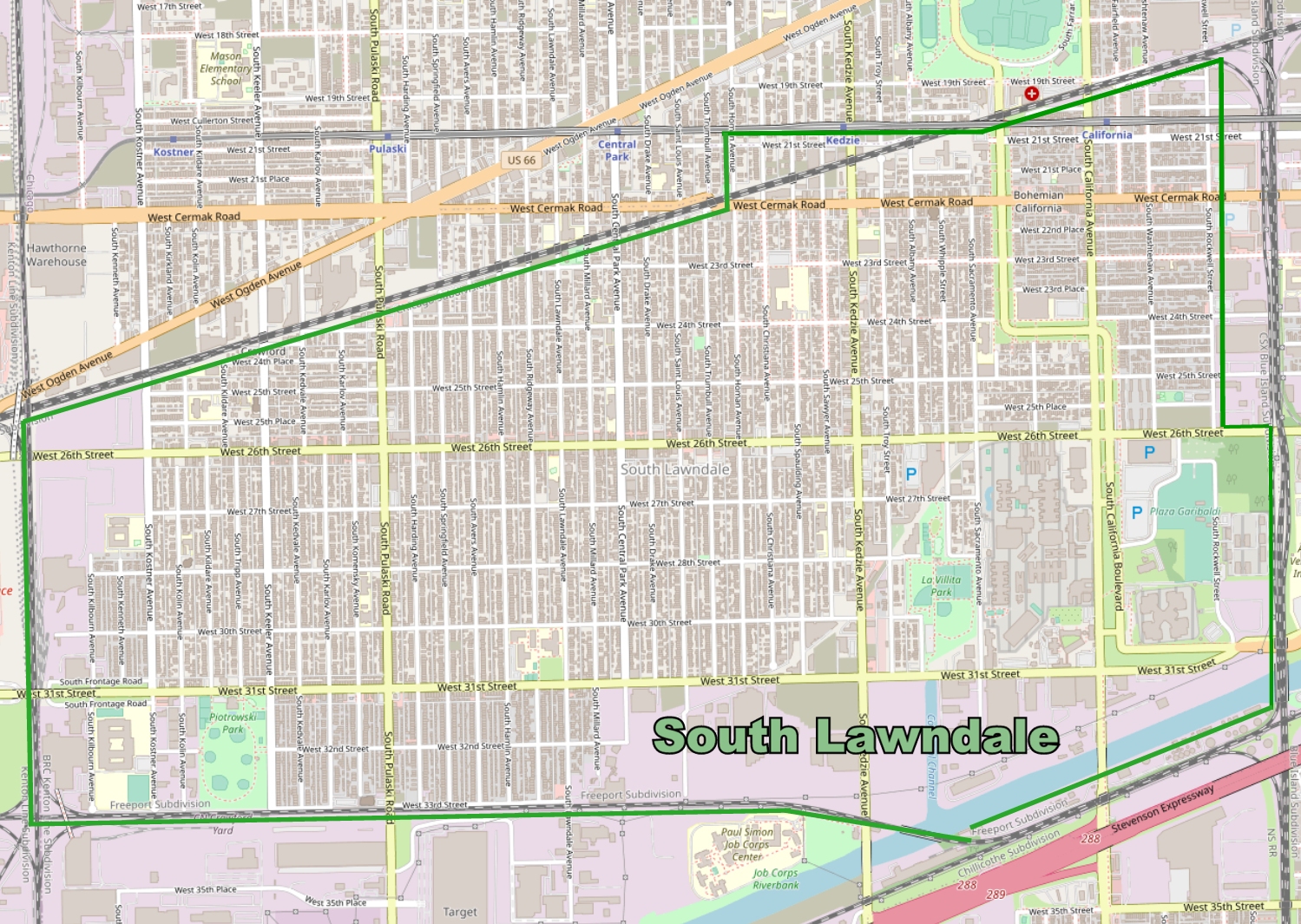 North Lawndale became part of Chicago in 1869 as land transferred from Cicero Township to Chicago by the State of Illinois.  Additional acreage to  this area was added in 1889 by Cook County. Real Estate developers, Millard and Decker, are credited with the name Lawndale.

"By 1890, North Lawndale was beginning to be heavily populated by Bohemian immigrants from the Austro-Hungarian Empire. Czechs moved most heavily to the area from Crawford (Pulaski) west, and from 12th St. (Roosevelt Rd.) to 16th St. Real estate firm W.A. Merigold & Co. was the chief developer of that part of the community, which resulted in the name "Merigold" being associated with the neighborhood. Czech institutions popped up in Merigold, beginning in 1890 with the Slovanska Lipa/Sokol Tabor (Czech fraternal & gymnastic organization) at 13th & Karlov.

In 1892, the Bohemian Catholic Church, Our Lady of Lourdes, was established at the corner of 15th & Keeler. In 1909 the Czech Freethinkers School, Frantisek Palacky, was built at 1525 S. Kedvale. The Merigold neighborhood was also known as Novy Tabor (New Camp) by the Czech immigrants who settled there. The premier Czech institution, established in 1912, was the Ceska Beseda (Bohemian Club) at 3659 W. Douglas Blvd. This club was attended by Chicago's Czech elite, as well as the visiting Czech elite of the rest of the United States and Czechoslovakia.

It was the place for its members to celebrate and enjoy literature, drama, and music by the most renowned and talented Czech artists. The ethnic Bohemians spread throughout the rest of the North Lawndale neighborhood; they were the original owners of many of the beautiful greystone buildings that graced the picturesque streets of the neighborhood. Many of the elite members of the Bohemian community resided in the vicinity of the 1800 and 1900 blocks of South Millard Avenue.

These wealthy men, as well as the rest of the Czech residents of North Lawndale, were strongly committed to their neighborhood, and were involved in civic affairs. Anton Dvorak Public Elementary School at 3615 W. 16th St. was named after the revered 19th-century Czech composer Antonín Dvořák. Several members of the North Lawndale Czech community occupied positions in city as well as county government. In the post-World War I years, the Czechs began leaving the neighborhood for newer housing in the western suburbs of Cicero, Berwyn, Riverside, and Brookfield.

By the 1920s, many of the Czechs were gone, and Jews became the majority ethnic group of the neighborhood after having left the crowded confines of the Maxwell Street ghetto. North Lawndale later became known as being the largest Jewish settlement in the City of Chicago, with 25% of the city's Jewish population." (1)

Irving Cutler, Professor of Geography, University of Illinois at Chicago Circle, published a book "Chicago - Metropolis of the Midcontinent" in 1973. It went through several additional editions.

The book contained a summary of "Czech California", also called "Bohemian California". Below is an excerpt related to that topic:

"As early as 1880 they began moving into what was to become the largest Czech community in Chicago. Known as "Czech California," it derived its name from California Avenue (2800 W). The settlement encompassed mainly the community of South Lawndale, and was bounded approximately by Rockwell (2600 W) to the east, the city's boundary with the community of Cicero to the west, 14th Street to the north and 33rd Street to the south. By 1910 Czechs owned about 80 percent of the dwellings in Czech California.

The major artery of this community was 26th Street, which was lined with Czech facilities, especially between Rockwell and Pulaski. At Lawndale Avenue (3700 W) was the three-story Sokol Havlicek-Tyrs which contained a large hall that doubled as a gymnasium. At Albany Avenue (3100 W), adjoining the Pilsen Brewery, was Pilsen Park where for more than half a century many Czechoslovakian organizations held picnics, dances, festivals, and political rallies-especially rallies for the independence of Czechoslovakia. A number of Czech churches were established in the area, including Catholic St. Ludmila at 24th Street and Albany Avenue and Blessed Agnes at 26th Street and Central Park (3600 W), and Protestant John Hus Church at 24th Street and Sawyer Avenue (3232 W).

Czech influence permeated Czech California. The Czech language was taught at Farragut and Harrison high schools, and streets in the area, such as Kostner, Karlov, and Komensky, were named for prominent Czechs. Twenty-second Street was changed to Cermak Road to honor Chicago's first foreign- born mayor, Anton J. Cermak, who was killed in 1933 during the attempted assassination of President-elect Franklin D. Roosevelt. The Douglas Park elevated line which traversed both PiIsen and Czech California was dubbed the "Bohemian Zephyr."

The main commercial street of Cicero and Berwyn is Cermak Road. At the Chicago boundary with Cicero, where the black residential population ends abruptly, stands the huge Hawthorne Works complex of the Western Electric Company, Cicero's largest employer. Large numbers of Czechs and Slovaks are employed there. Nearby, on Cermak Road just west of Cicero Avenue (4800 W), stands the hotel where the gangster Al Capone had his headquarters in the 1920s. Capone terrorized Cicero and controlled its gambling, boot- legging, and even some of its elections and public officials." (2)

A Historical Look at Czech Chicagoland

Czechs and Bohemians - Encyclopedia of Chicago