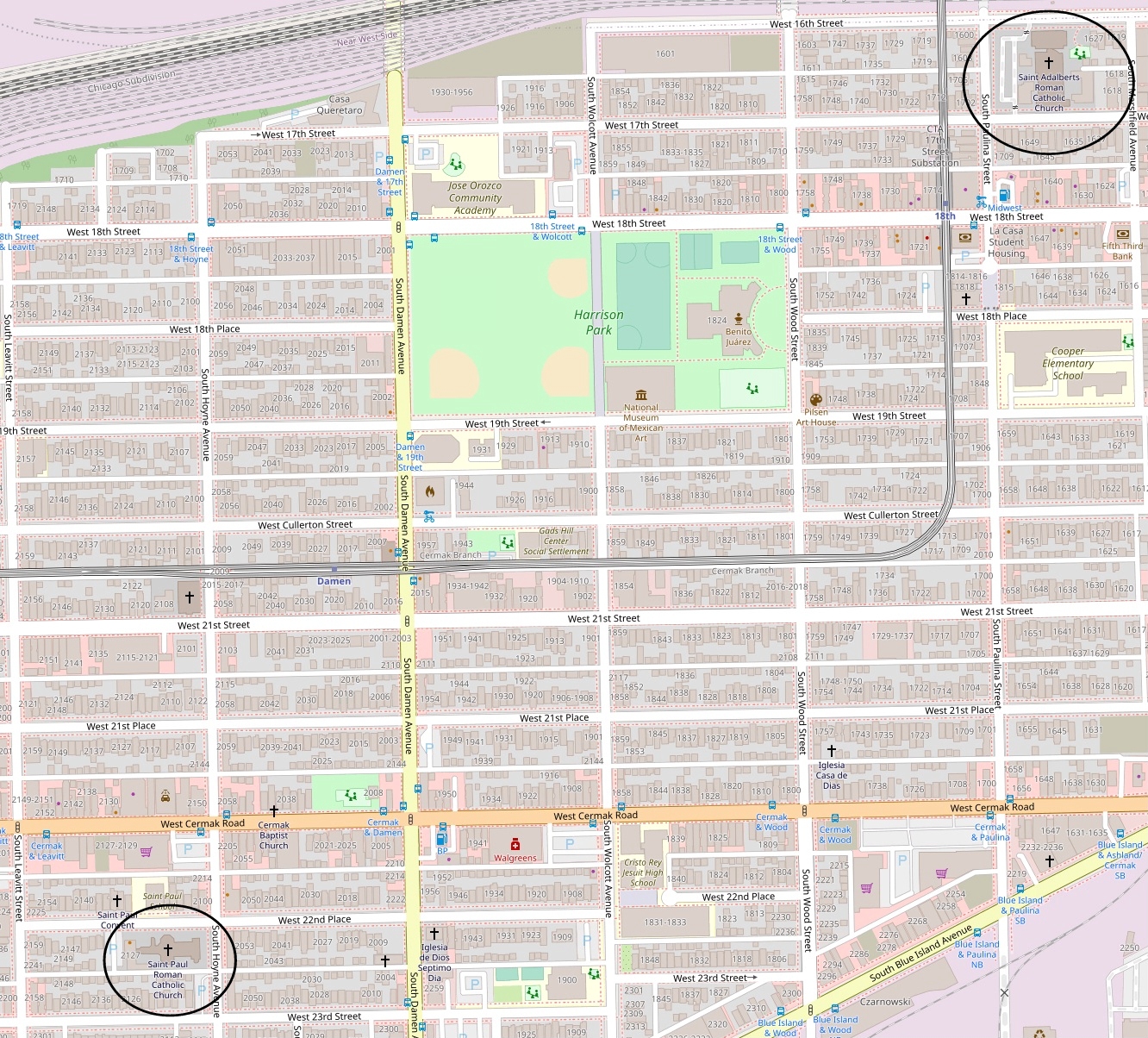 Saint Adalbert and Saint Paul Catholic Churches located at the edges of the Pilsen District are two churches which were intertwined with the the closing of Saint Adalbert.

Saint Adalbert organized in 1873 was closed by the Archdiocese of Chicago in 2019.

Saint Paul organized in 1876 would become the church to provide services by the parishioners of the closed Saint Adalbert.

Community groups have formed in an attempt to keep Saint Adalbert open or to, at the very least, repurpose the church for other religious of community activities.

Even in 2022, some community groups do not feel a satisfactory resolution has been achieved.  2022 became a focal point of renewed disappointment for those wishing for some use of Saint Adalbert as the Archdiocese moved one of Saint Adalbert's more famous pieces of art, a replica of Michangelo's La Pieta was removed from Saint Adalbert and transferred to Saint Paul.

Groups supporting a new use for Saint Adalbert, and others following the local news, have seen movement for the building to be sold, and a future use of the building or its location not completely determined.

Below is an excerpt from "The Diamond Jubilee of the Archdiocese of Chicago 1920" St. Mary’s Training School Press, Des Plaines, Illinois, 1920, Pages 433 to 435. (Images below of Saint Adalbert from the same reference.)

St. Adalbert's parish was organized in 1873, by Polish residents, who lived in the then sparsely settled territory on the south- west side, extending from Taylor Street to the Town of Lake. They barely numbered fifty families and were hard working people, who had but recently emigrated from their native soil ; poor in purse but strong in the Faith of their Fathers and in their devotion to the Church and the best traditions of their native land. A committee composed of Frank Szymanski, Lucas Pipowski, Leo Lasinski and Walenty Muszczak, was appointed. In the preliminary work of organization, the advice and guidance of the late Rev. Joseph Molitor, pastor of St. Wenceslaus' Bohemian church, proved invaluable. With the approbation of Right Rev. Bishop Foley, they proceeded immediately to the formation of the parish. Two lots at the northeast corner of §. Paulina and W. 17th Streets were purchased and the corner-stone of the church was laid in June, 1874.The limited funds, at the disposal of the parish, permitted only the erection of the basement of the building, where divine services were held for about ten years. The first rector of the church was Father Klimecki, who attended to the spiritual wants of the small flock only a few months. He was succeeded by an energetic priest in the person of Rev. Dominic Majer.......

He managed to install many improvements and established a parochial school, in which Mr. Constantine Mallek,. an experienced pedagogue, acted as teacher and at the same time performed the functions of an organist. A modest two story brick building served the combined purpose of rectory and school.....

The educational training was entrusted to the Sisters of the Holy Family of Nazareth, in 1886 ; a new school building and a rectory were built. From this parochial school many, who won distinction in religious, political and professional life were graduated....

Notwithstanding the repeated reduction of the territorial limits of the parish, the capacity of the school and of the church was soon found to be too small. In 1907 another school building was erected. In 1912 additional land was bought, and the corner-stone of the new church was laid by the late Most Rev. J. E. Quigley, in presence of many priests and 50,000 people. The church was finished in 1914. On the 20th of September his Grace, Archbishop Quigley dedicated the new place of worship. ……...

On the whole the record of St. Adalbert 's parish is remarkable when you consider that from almost a handful of people it has grown to its present dimensions. At present there are over 3,000 families upon its register, 2,614 children attend school, and 57 societies attend to the social, benevolent and cultural needs of the parish. St. Adalbert's Day Nursery, established by the present pastor, in 1913, and conducted under his auspices, with a daily average of 70 children, became a blessing to the poor of the parish. ….." 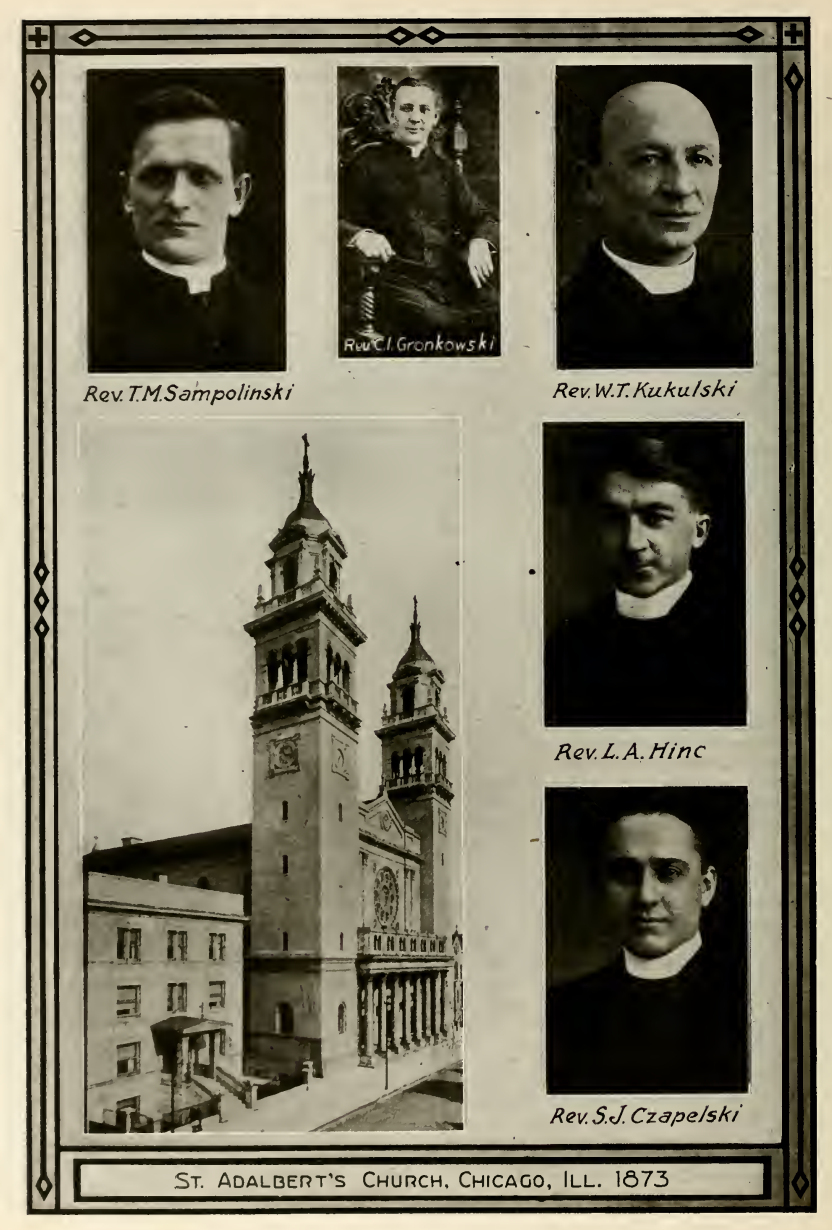 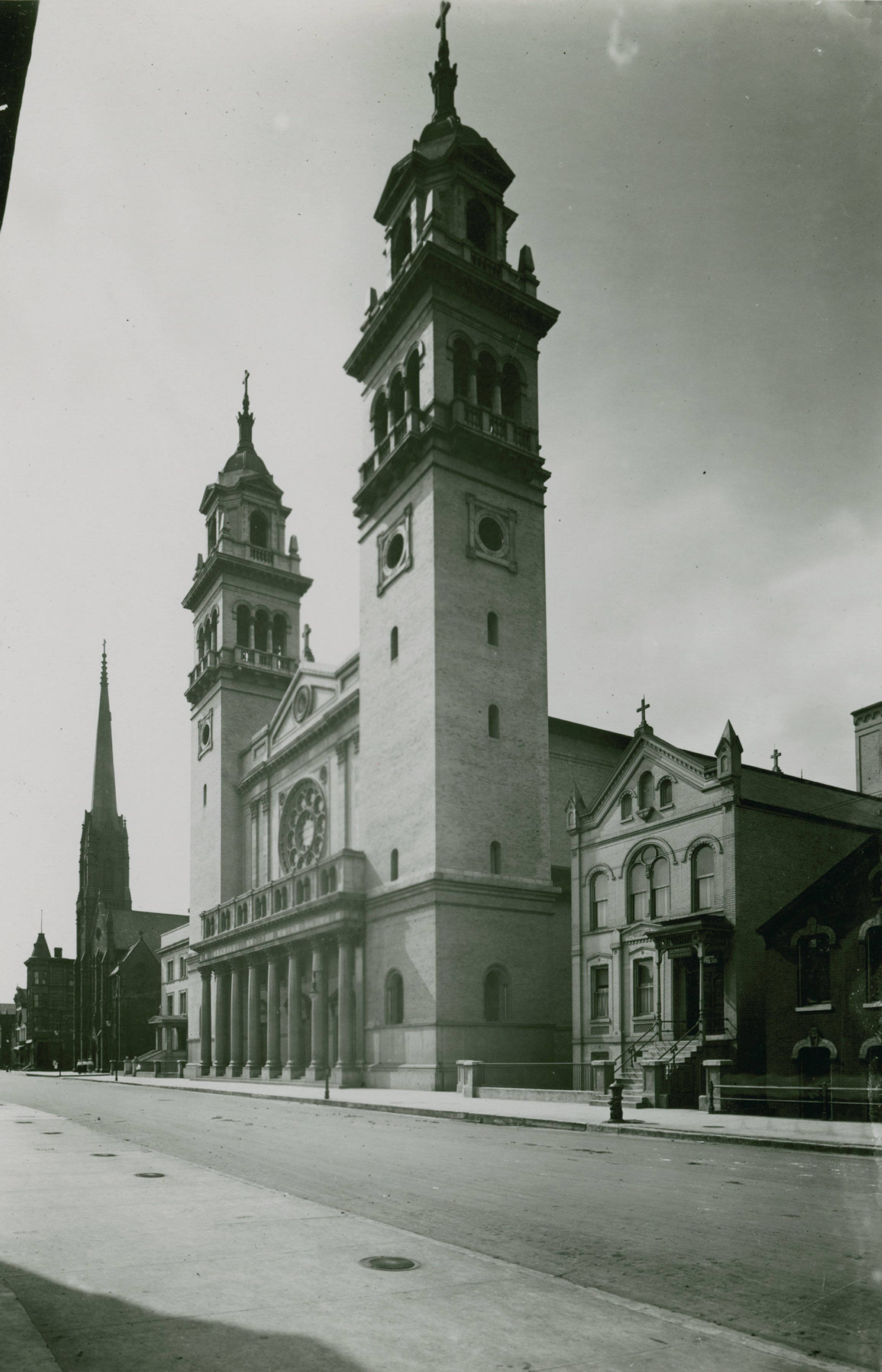 Below is an excerpt from "The Diamond Jubilee of the Archdiocese of Chicago 1920" St. Mary’s Training School Press, Des Plaines, Illinois, 1920, Page 453. (Images below of Saint Paul from the same reference.)

St. Paul's church, at 22nd Place and Hoyne Avenue (southwest corner), was founded by Rev. E. Weber in the year 1876. Father Weber found but forty families in 1876 to start with. As he was short of funds. he bought a stable and moved it to Hoyne Avenue. He also commenced a parochial school and added other small buildings for the immediate wants. Under his administration a parochial residence was erected at the cost of $6,000. This building is still in existence and is part of the Sisters' convent. He also started a new church, constructing a basement at an expense of $17,000 with the intention of adding the super- structure in due time. The basement served as a church and seated about 900 people. However, his successor tore down this basement and used the material for filling in the site of the present church. Father E. Weber was removed to another place of labor and was succeeded by Rev. G. D. Heldmann. March 1, 1888. Father Weldman worked enthusiastically and in 1892, built the school, large enough to accommodate easily 650 pupils and equipped it with all modern improvements, that even now it is up to date and satisfies all modern requirements. Father Heldmann joined the Precious Blood Order, was editor of the Messenger of Beteschafte and died January 16, 1916. Under his administration a rectory and society hall were built.

Financial conditions caused the removal of Father Heldmann in November, 1903. Father F. Rempe was appointed administrator to succeed Father Heldmann. Most Rev. J. E. Quigley turned over the parish to the Benedictine Fathers of St. Vincent Archabbey, Beatty, Westmoreland Co., Pa., on the eleventh day of February, 1904. Father Benno Standigl, O. S. B., was appointed rector and first prior of St. Paul's church, assisted by Rev. Ambrose Kohlbeck, O. S. B., and Rev. Lenord Schlim, 0. S. B., by the Rt. Rev. L. Schnerr, 0. S. B., Arch-abbot.

The corner-stone for the new church designed l)y Architect Henry .1. Schlacks, was laid in the year 1897.

Below is an excerpt from "Illustrated Souvenir of the Archdiocese of Chicago, R.H. Fleming Publishing Company, Chicago, 1916,  Page 51.

Although situated in the heart of a busy manufacturing district at Twenty-second Place and Hoyne Avenue, the Church of St. Paul (German) is a most imposing edifice and reflects great credit on the parishioners. The parish was organized in 1878, but the corner-stone of their beautiful church was not laid until 1897. and the building itself was not completed until 1899. The two stately towers, thirty-two feet square at their base, and rising to a height of 240 feet, are the pride of the neighborhood. The parish house, just back of the church, is constructed in the same style of architecture. The church school is also constructed on splendid lines and includes grammar, commercial and high school departments. It is attended by about 600 children, who are instructed by six- teen School Sisters of Notre Dame. The Very Reverend Leonard Sclilimm, O.S.B., is pastor; Reverend Augustine Minkel, O.S.B., Reverend Bonaventure Reithmeier, O.S.B., and Reverend Herbert Huettner, O.S.H., are assistants." 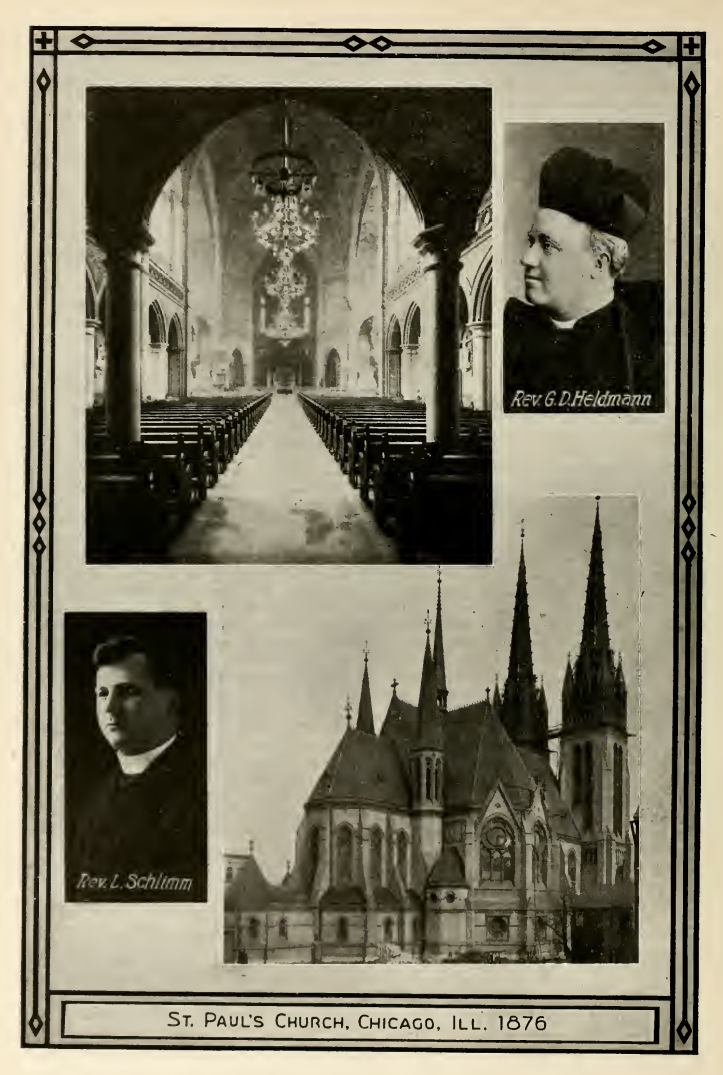 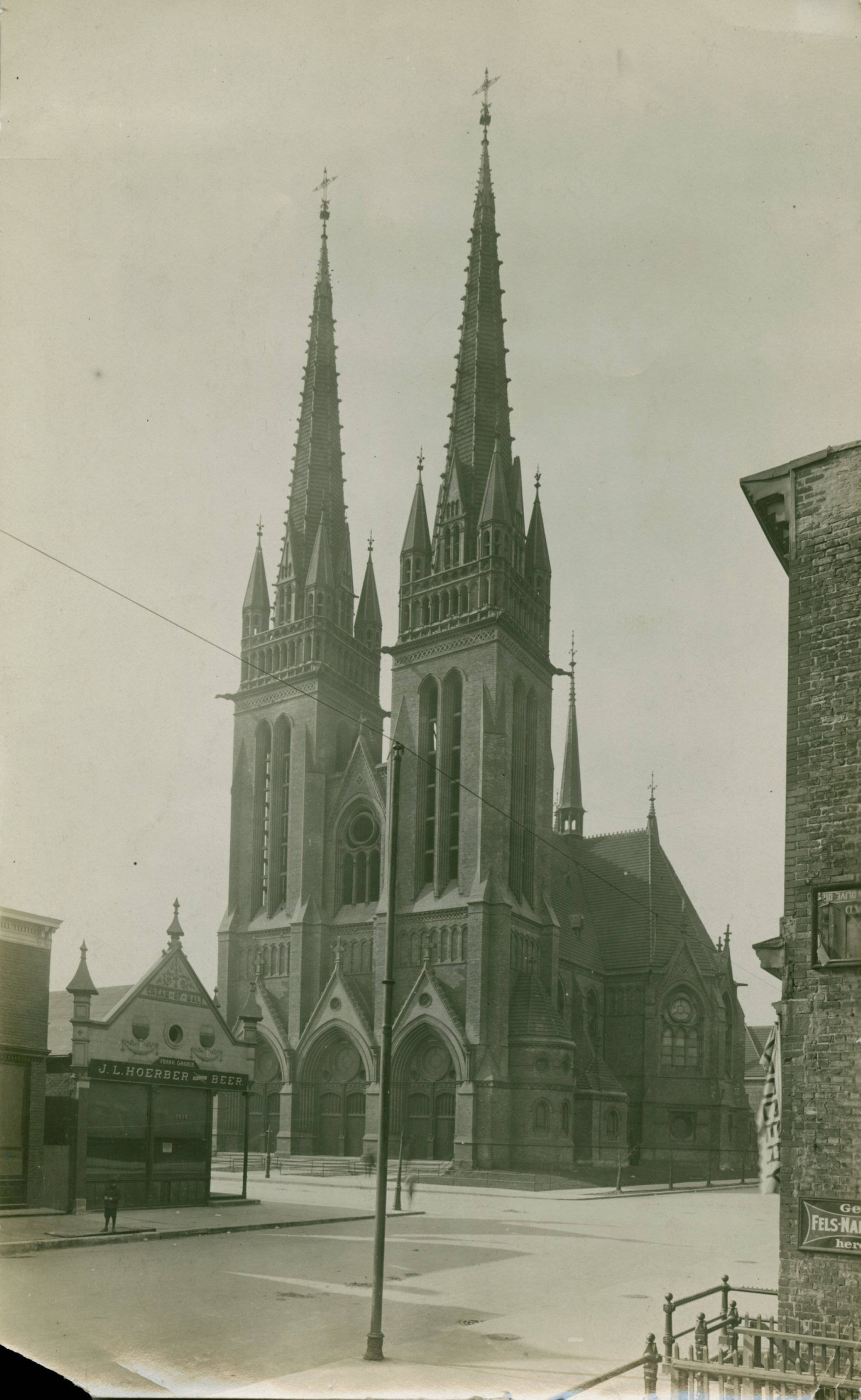