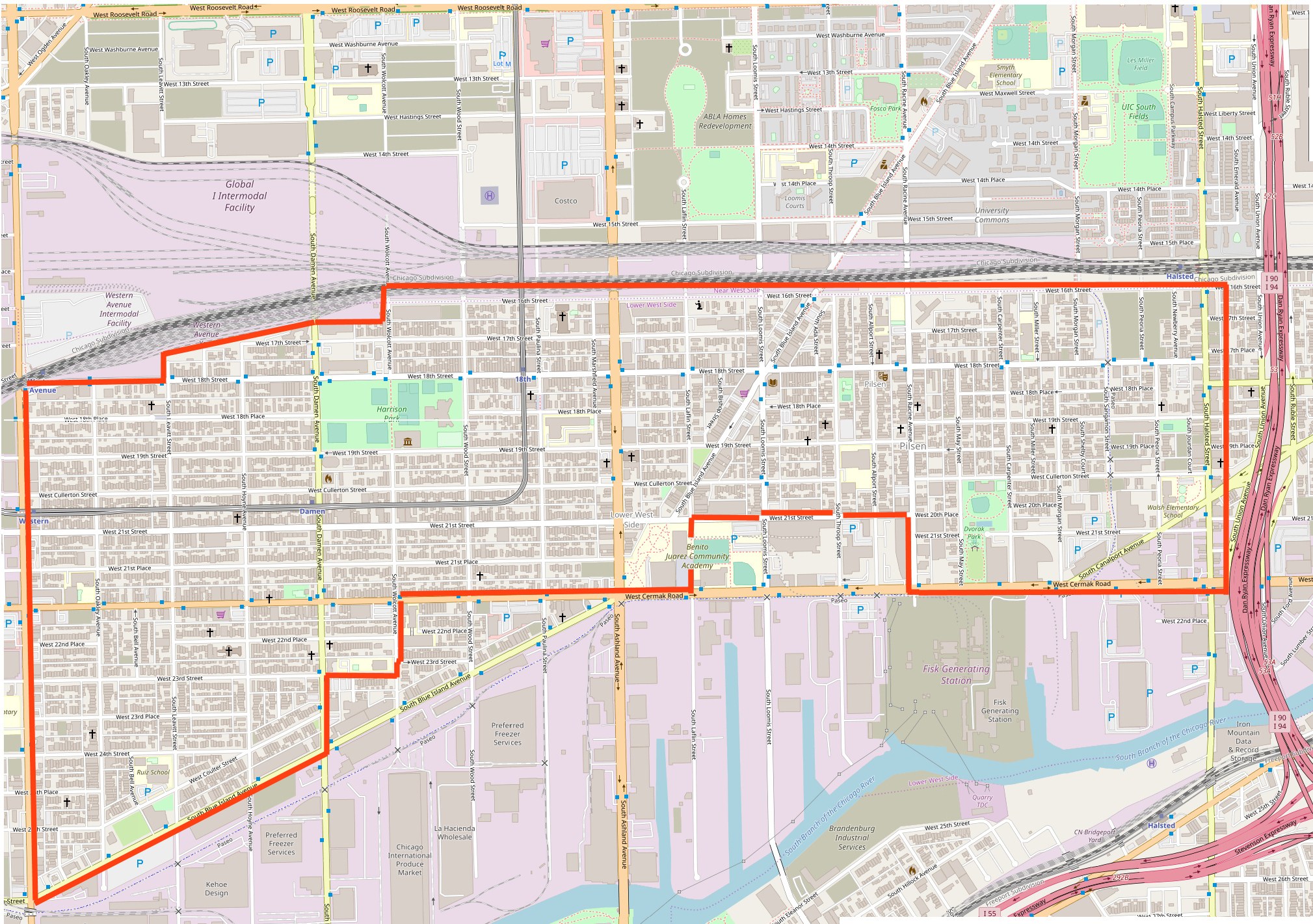 The Pilsen Historic District is located approximately two and one half miles southwest of Chicago's downtown. The general boundaries are Halsted Street on the east, Cermak Road on the south, Western A venue on the west, and the railroad viaduct just north West 16th Street on the north. The completely flat topography makes the streets' adherence to the city's rigid urban grid readily apparent. Although real estate investors platted many of the streets in the 1850s, builders did not begin constructing the neighborhood until after the Great Chicago Fire of 1871.

In December of 2005, the United States Department of the Interior, National Park Service, published the document leading to the establishment of the Pilsen Historic District.  Below are several pages of that public document describing the history of the Czech settlement in the Pilsen District.

Click on this for the complete document in PDF format

The first wave of Bohemian immigration to the United States occurred after the failed revolution against the Austrian-Hungarian Empire in 1848. The Bohemians who came to Chicago quickly settled along the southern boundaries of Lincoln Park. By 1855, the population had moved south of Jackson Street and by 1860 the first major Bohemian settlement in Chicago- Prague"- had been established. The boundaries of this settlement, named after the largest city in Bohemia, were from South Polk on the north to the river on the south, between South Halsted and South Canal Streets. This neighborhood, stretching east of South Halsted Street to the river, abuts what is now Pilsen. Jakub Horak, an active member of the Bohemian community, analyzed Pilsen's development in his 1920 doctoral dissertation in sociology at the University of Chicago. Horak observed that, in this neighborhood, his countrymen were for the first time able to construct "a somewhat more permanent and better organized community. It shows the establishment of institutions such as churches, schools, and meeting halls of societies and independent representation of [Bohemians] as a nationality in the city." " In Prague, the Catholic Bohemians of Chicago built their first major public structure, the now demolished St. Wenesclaus, in 1863 at the northeast corner of DeKoven and Desplaines Streets. Prague was on its way to becoming a self-sufficient community, as it was here that a newly immigrated Bohemian could "get along with the exclusive use of the Czech language. He could provide everything and live in the middle of a foreign sea, exactly as at home!" " Prague, therefore, formed the model for what would become the next major Bohemian settlement, Pilsen. The neighborhood was largely self-contained and provided the cultural familiarity that enabled new immigrants to retain their language and customs. This made the assimilation process slower, but less difficult.

The population of Prague would soon outgrow its space. After the 1871 Chicago Fire, there was a dramatic shift in the city's population, as people whose homes had burned sought new places to live. Other ethnic groups soon arrived in Prague, changing the relatively autonomous nature of the neighborhood. Because the Bohemian population desired to preserve the homogeneity and because at least some members of the community had achieved a measure of financial success, Bohemian residents looked to the area west of Halsted to establish a new community.

This move westward into the area that is now known as Pilsen was also made necessary by an increase in the number of Bohemian immigrants, encouraged by the Homestead Act and an immigration treaty between the United States and the Austrian-Hungarian Empire in the 1860s." A greater portion of this group of new immigrants consisted of craftsmen or artisans, ' a largely entrepreneurial group seeking economic and social stability. The Chicago Fire and the wave of construction that followed in its wake created opportunities for workers skilled in the building trades. Pilsen's pattern of land ownership was established largely along the lines of the grid of the city to its north. Although real estate agents platted much of the land before the Fire, it remained largely undeveloped by the time that the Bohemians began to move into the area. This gave the settlers a blank slate on which to build their new community.

The neighborhood's geographic isolation proved conducive to the construction of an autonomous and self-sufficient Bohemian enclave. The Chicago, Burlington & Quincy Railroad tracks built along West 16th street in 1863, along with the docks built along the north branch of the south branch of the Chicago River in 1857, made for "physical barriers, isolating [Pilsen] from the rest of the city."' Furthermore, until the Douglas branch of the Metropolitan West Side Elevated Railroad, constructed between 1898 and 1905, reached Pilsen, the only route of public transportation connecting it to the Loop would be the Blue Island Cable Car Line. Because the boundaries of the District were so well defined on the south, north, and east, it was easier for Pilsen to declare itself as a specifically Bohemian neighborhood. In contrast to the more fluid borders of the Prague settlement, the natural and manmade barriers surrounding Pilsen enabled the Bohemians to create a more exclusive community.

CSAGSI has a very complete summary of the Pilsen District and the page includes additional links: https://csagsi.org/chicagos-pilsen-neighborhood/