The Fall 1996 issue of our society's journal, the KORENY, included a summary of the beginnings of Saint Simon The Apostle Slovak Church:

It was a fitting beginning, that eve of the Fourth of July. The year? 1916!  America was at peace. Breathing deeply the air of freedom and rejoicing in the fresh joy of their citizenship in a democratic nation, a small group of Slovaks dared to dream dreams formerly unheard of in the land of their origin, Austria-Hungary. 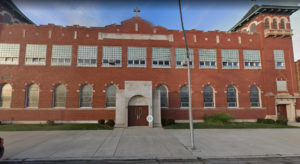 Under the guidance of the Rev. Gregory Vanisciak, O.S.B., a meeting brought together various leaders to formulate a plan of action for the founding of a new parish. Mr. Martin Mensik read a letter from the Archbishop informing the group that those who wished to establish this new parish were themselves responsible for deciding its location and formation; that a sum of about $10,000 would be needed; and last, that Fr. Vanisciak would be the administrator of the new parish. The sixty members present immediately and unanimously chose the locations as west of Western Avenue somewhere on 51st Street. They elected the following Board of Directors: President, Joseph Massura; Secretary, Joseph Tomala and Stephen Raffac, Treasurer.

On December 10, 1916 a motion was passed authorizing the purchase of seven lots on California and three on Fairfield. The President of the group suggested they name the new parish SS. Peter and Paul.

Two months later Wilson asked Congress to declare war on Germany. Progress on the proposed parish of SS Peter and Paul came to a standstill. By March 25, 1917, some property had been purchased, but at the next meeting held on August 19, it was reported that no further meeting was called until May 12, 1918. At that time word from the Archbishop informed the founders that the Parish of St. Michael the Archangel would assist the new foundation. A new parish Committee was formed retaining Joseph Reppa as President, adding John Massura as Vice-President, John Virva as the Secretary, and Stephen Raffac as Treasurer.

The following January 1, 1920, a discussion pursued the idea of purchasing or renting a store on 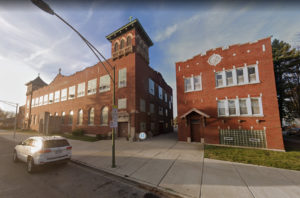 South Rockwell and 51st Streets as a temporary church. The majority, however, pressed for a new building with or without ecclesiastical approval. Within three months, John Slovinec was asked to submit a sketch and determine approximate costs for a church structure. Plans for a school and a search for teaching Sisters followed. On January 30, 1921, the treasurer listed the paltry sum of $289.65 and a debt of $3,000. One year later, the total Parish assets amounted to $6,500. In order to realize the needed funds for the new building, each member of the proposed Parish was requested to donate at least $50 to the building fund. Most of them sincerely desired to contribute this amount, but the post-war period made financial contributions difficult. Hence, economic circumstances forced the Parish Committee to ask Michael Skorup for the use of his hall. He promised it would be ready for parochial purposes by May 1, 1922. Two years would slip by before another meeting for the founding of the Parish would be held.

The two-year vacuum called for a reorganization of forces and re-election of Committees and Trustees. Archbishop Mundelein decided against the building of a new church and promised to negotiate with the Augustinian Fathers al 55th and Talman for a Slovak priest to take care of their needs. This was totally unacceptable to the Parish Committee, and they decided to continue their efforts to establish a church and school where their children could be taught in their mother tongue. Several monthly meetings were held with the expressed determination of realizing their dreams for SS. Peter and Paul Slovak Church.

Finally, on August 7, 1925, a special committee visited the Chancery Office and gave the title deeds for 12 lots to the Archdiocese. The Chancery then appointed Monsignor Victor Blahunka to look into the matter. On January 10, 1927, Msgr. Blahunka suggested the possibility of having the four Slovak Bishops who were coming from Slovakia for the Eucharistic Congress in Chicago to lay the cornerstone of the new building. Cardinal Mundelein sent additional proposals concerning the new parish. However, the name of the new Slovak parish assigned by the Chancery Office was St. Simon the Apostle because a Polish parish in the near vicinity already had the name SS. Peter and Paul.

An important gathering occurred on September 26, 1926, when the various committees met in session to greet their newly appointed pastor, Rev. Edward Sendek. Fr. Sendek congratulated the members upon their great progress and called upon them to continue their splendid efforts in behalf of the parish. He offered the first Mass for St. Simon Parish on October 3, 1926, in Michael Ardon's residence. When the original wooden building was completed it served the people's needs as a church for two years and was then converted into a parish hall. 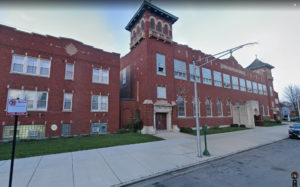 In May 1928, the Cardinal approved the blueprints, presented by the architect, John Slovinec. In addition to a church, the plans called for an eight-room school on the second floor. Ground was broken in May 1928 for the new church and school, rectory, and convent. With a building fund of $25,000 and a total loan of more than $168,000, the Parish was soon ready for the blessing of the cornerstone on June 17, 1928.

Elaborate preludes to the blessing of the cornerstone were organized. There was a procession of police, flag bearers, St. Aloysius Cadets, uniformed Sokolky and Sokoly, Parish Societies, decorated autos, representatives of all the Slovak Catholic Parishes in the area, and bands from St. Simon's and St. Michael's Parish. The entourage started at the "old" wooden church on South California and proceeded north to 51st Street, east on 51st to South Rockwell, south to 54th Street, west on 54th to South California, and back to 52nd Street. Along the way, homes of parishioners were decked in Slovak and American flags. Strains of "Veni Creator" (Come Holy Ghost) filled the air as His Eminence blessed the church and school.

The demographics of the service area for St. Simon The Apostle changed over the decades.  Slovaks and Czechs became less in numbers and the Hispanic population grew in numbers.  In 2020 the Archdiocese of Chicago changed the status of St. Simon.

1. CSAGSI Fall 1996 Saint Simon The Apostle - A Center of Catholic Slovak Chicago, Published in the Fall 1996 edition of the KORENY, journal of the Czech and Slovak Genealogy Society of Illinios.