Sacred Heart Slovak Church, Huron Street and Oakley Boulevard, was the sixth Slovak parish organized in Chicago.  Slovaks, settling on the near northwest side of Chicago, wanted a church.  Beginning in 1909, they started to raise money to create such a church. 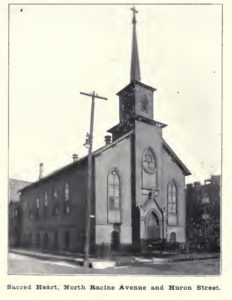 Enough money was collected to begin the purchase of the Bethlehem Norwegian United Church at the intersection of Huron St., and Center (now designated Racine).  In 1911 the Archdiocese permitted the purchase of the building provided enough funds to make that purchase possible.

Reverend Bajor celebrated the first mass on October 6, and the church was dedicated on October 22, of 1911.  Slovak membership in the parish grew so quickly that the Archdiocese allowed the purchase of property at the corner of Huron St. and Oakley Boulevard in 1914.  Community fund raising began again.

In March of 1916, work began, and in May of the same year, the cornerstone for the church was set.  Rapid progress ensued as mass was celebrated on Christmas day of the same year, and Archbishop Mundelein dedicated the church on January 17, 1917.  At tht time Sacred Heart Slovak Church overlapped the parish borders of Saint Malachy Church on Western and Saint Nicholas Ukrainian Church on Rice and Oakley.  In January of 1917, sisters from St. Francis of Mary Immaculate of Joliet, began Sacred Heart school, which was located on the third floor of the new building.

Revered Bajor became ill and died in early 1923.  He was replaced by Father Louis Newwirth from Saints Cyril and Methodius Slovak Church.  He was pastor from 1919 to 1921. 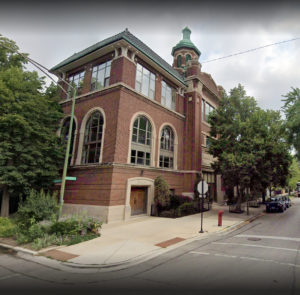 The next pastor, Victor Blahunka remained at Sacred Heart from 1921 until 1959.  Father Blahunka earned numerous Archdiocese and Papal honors.  He became a Papal Chamberlain, gaining the title Very Reverend Monsignor in 1925 and in 1945 he gained the title Domestic Prelate titled Right Reverend Monsignor.  As pastor he worked to maintain the Slovak culture within the parish and community.  He promoted fraternal Slovak organizatons, served as Supreme Chaplain of the First Catholic Slovak Ladies Union, and headed the project of purchasing land and beginning Our Lady of Sorrows (Slovak) Cemetery in Hillside, Illinois.

Monsignor Blahunka died in 1959
Chicago Tribune, October 11, 1959, Page 42
Msgr. Victor Blahunka, 74, a Roman Catholic priest for 52 years and pastor of Sacred Hear Slovak Church, 721 North Oakley Blvd., since 1921, died Saturday in the Villa St. Cyril home in Highland Park. Msgr. Blahunka, born in Liptoveske Lucky, Slovakia, came to the United States in 1912 and served in Kenosha and Milwaukee before becoming pastor at SS Cyril and methodius church, Walton street and Kildare avenue in 1915. He was assigned to Sacred Heart Oct. 21, 1921, and four years later was elevated to the rank of monsignor. Surviving are a brother, Louis and a sister, Mrs. Gabriella Bardos in Slovakia. Mass will be said for Msgr. Blahunka at 10;30 am Wednesday in Sacred Heart Church.

Following the death of Monsignor Blahunka, the Reverend Francis Kosjak, former pastor of Saint John the Baptist Slovak Church in South Chicago, became pastor.  While, during his time, Sacred Heart underwent building renovations and a new church organ was installed, the church also began to experience the loss of Slovak parishioners.  The school closed in 1968.

Reverend Francis Dilla, born in Sacred Heart parish and a graduate of its elementary school, the associate pastor of Assumption BVM Slovak Church became the next pastor of Sacred Heart.  He was pastor as the church celebrated the 65th anniversary of the founding of Sacred Heart.  Just after a year and a few months of being at Sacred Heart, Pastor Dilla was shot by robbers as he was helping parishioners walk home.  Congregation members helped Reverend Dilla to recover and return to resume his duties at Sacred Heart. (A)

A little more than a decade would pass.  The Archdiocese closed Sacred Heart Slovak Church on December 31, 1990. (Archdiocese PDF Doc)

The Sacred Heart of Jesus Slovak Church was erected in 1916. It is located at the corner of Huron Street and Oakley Boulevard. It is a magnificent edifice and of beautiful architecture. It has a school and a gymnasium in the same building. A capable dramatic club has been organized in the congregation . The Rev. M. Bajor is the pastor and has been in charge of that parish for a number of years. The school has six Sisters and 300 pupils.