The parish of Holy Rosary ( Slovak) ' was organized in 1907 , and the first pastor was Rev. A. J. Novacek. The second Rev. John Novotny. The latter erected the little frame church and rectory. The present pastor is Rev. Emeril Gottschall. Under the pastorate of Father Gottschall, a mission was held in the year of 1913, by the Rt. Rev. Joseph M. Koudelka, Bishop of Superior, Wisconsin. Following the Mission, ground was bought up on which was erected the convent for the Sisters. On the 26th of July, 1914, the foundation was laid for the Holy Rosary school. Rt. Rev. Paul P. Rohde officiating. On the 25th of July, 1915, the school was blessed by Bishop Rohde. In the same year,the services of the Sisters of SS. Cyril and Methodius were secured for the school . On the first of September, 1915, the school was opened with 150 pupils. On the 18th day of November, 1917, the canonic visitation and confirmation was administered by His Grace the Most Rev. Archbishop George William Mundelein. The Church is located at 10806 Perry Avenue and the school has four sisters and close to 200 pupils. There are in the parish several branches of the First Catholic Slovak Union, the National Catholic
Society, and many other Catholic organizations. (1)

CSAGSI's journal, the KORENY, included an article on Holy Rosary.

Holy Rosary Slovak Church was founded in 1907 by Rev. Anton J. Novacek by Slovak families living in the Calumet, Grand Crossing, and Blue Island, Illinois districts. For several months, he celebrated Mass for his small congregation in nearby St. Anthony Church. In January 1908, Father Novacek was appointed pastor of St. John Nepomucene Church, which was then located at 25th and Princeton Avenue. Rev. John Novotny, who succeeded Father Novacek as pastor of Holy Rosary Church, took up residence in a temporary rectory at 40 East 107th Street. He directed the construction of a new rectory in 1910 at 10806 South Perry Avenue. In 1909, Father Novotny organized St, John the Baptist Slovak Church at 91st and Burley Avenue in the South Chicago steel mill district. He celebrated Mass for his Slovak congregation in the Lithuanian Church of All Saints until May 1910, when a frame structure was completed at the southwest corner of 108th and Perry Avenue. Holy Rosary Church, dedicated on October 2, 1910, remained in use until it was razed 46 years later. In 1913, Rev. Emery Gottschall, former pastor of St. Joseph Slovak Church on West 17th Place, was appointed pastor. His first concern was to build a parish rectory and convent. Holy Rosary School, located at 115 West 108th Street, was dedicated on July 25, 1915, by Auxiliary Bishop Paul P. Rhode. When school started in September, the Sisters of SS. Cyril and Methodius from Danville, Pennsylvania enrolled 150 students. Father Gottschall served as pastor until 1921, when he was appointed pastor of SS. Cyril and Methodius church in Joliet, Illinois (now in the Joliet diocese). His replacement, Rev. Stephen Ivicic, guided the parish from 1921 to 1924, when he was named pastor of St. John the Baptist Slovak Church. Rev. John Olsavsky, a former pastor of St. John the Baptist Slovak parish, was named pastor of this parish in 1924. In that year, the Sisters of SS. Cyril and Methodius withdrew from the parish. Holy Rosary school remained closed for the next three years. In 1927, Father Olsavsky was transferred to Sacred Heart Slovak Church. Later that year, he organized St. Paul Slovak Church in Chicago Heights, Illinois. Rev. Michael J. Buc, a former administrator of SS. Cyril and Methodius church, came to Holy Rosary parish in 1927. During that year, the School Sisters of Notre Dame from Milwaukee, Wisconsin agreed to staff the parish school. They remained in charge until 1931, when the Sisters of Holy Family of Nazareth began their work in the parish. In 1933, Father Buc was named pastor of St. John the Baptist Church. His successor, Rev. Andrew T. Valcicak, had grown up in Holy Rosary parish and had attended the parish school when it opened in 1915. Father Valcicak returned to the parish of his youth on May 22, 1933. The silver jubilee of the founding of Holy Rosary parish was celebrated on October 20, 1935. The parish membership grew so rapidly in the 1940s that the Sunday schedule of Masses was increased from two to six. In 1951, Father Valcicak bought an apartment building at 10834 South Perry Avenue, which was remodeled as a parish convent. In 1955, permission was secured from the Chancery Office to build a new church. The old frame building was razed and the rectory was moved from 10806 South Perry Avenue to a site at 109th and Wentworth Avenue. Ground for the new edifice was broken at the southwest corner of 108th and Perry Avenue on July 4, 1956. For the next two years, parishioners attended Mass in the school hall. On October 7, 1956, the cornerstone of the new church was laid and Mass was celebrated in Holy Rosary Church for the first time on Christmas Eve 1957. Auxiliary Bishop Raymond P. Hillinger dedicated the modern Romanesque structure on June 22, 1958. Holy Rosary Church had been completed according to the plans of architect J. Ellsworth Potter of Cleveland, Ohio. The new rectory had been built at 100 West 108th Place. The golden jubilee of Holy Rosary parish was celebrated on September 11, 1960. The Sisters of Nazareth continued their work in the parish until 1972, when Holy Rosary School was consolidated with All Saints School. After serving the people of this Slovak parish for 40 years, Father Valcicak was named pastor emeritus on January 3, 1973. He died on June 1, 1977. 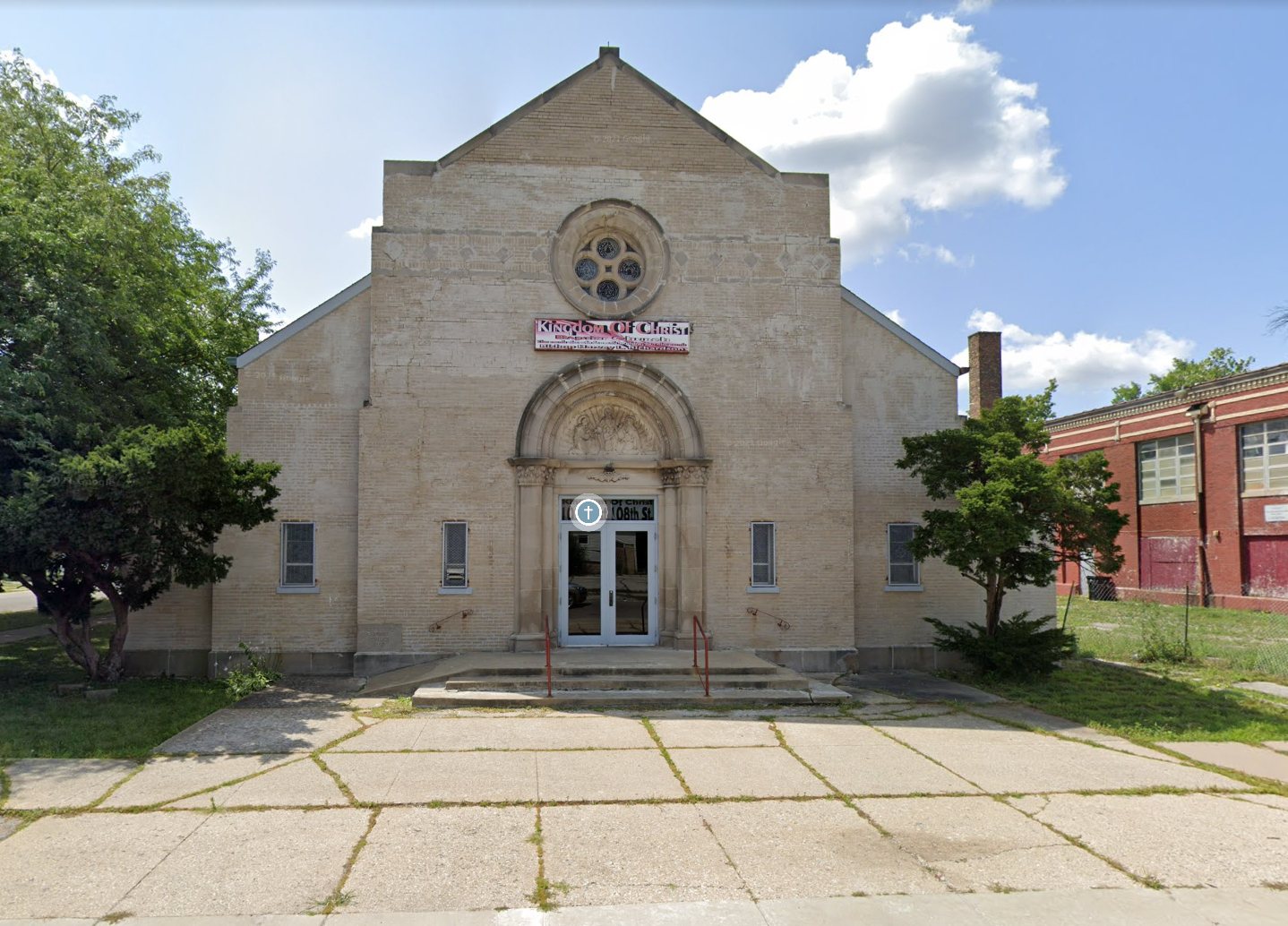 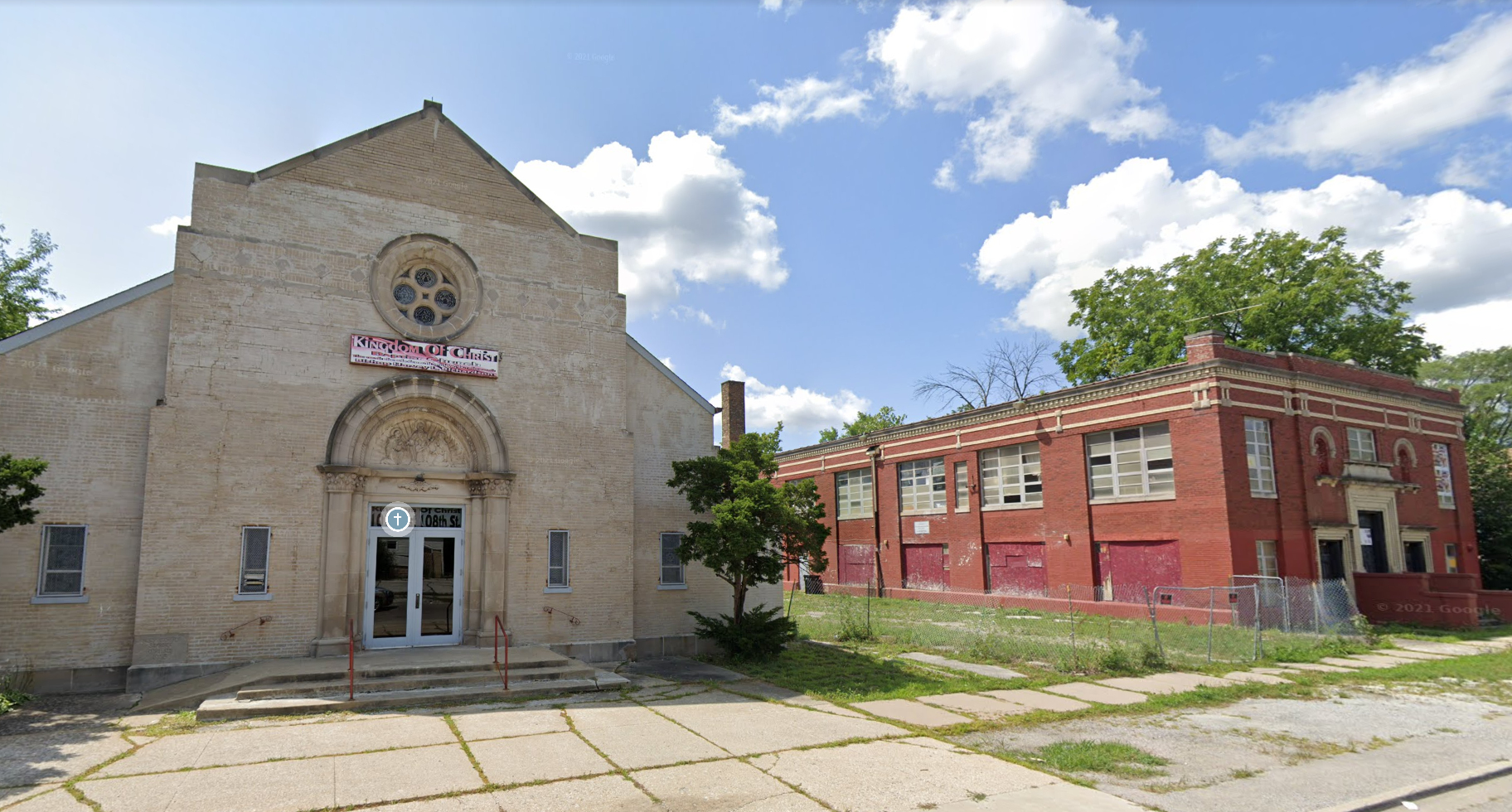 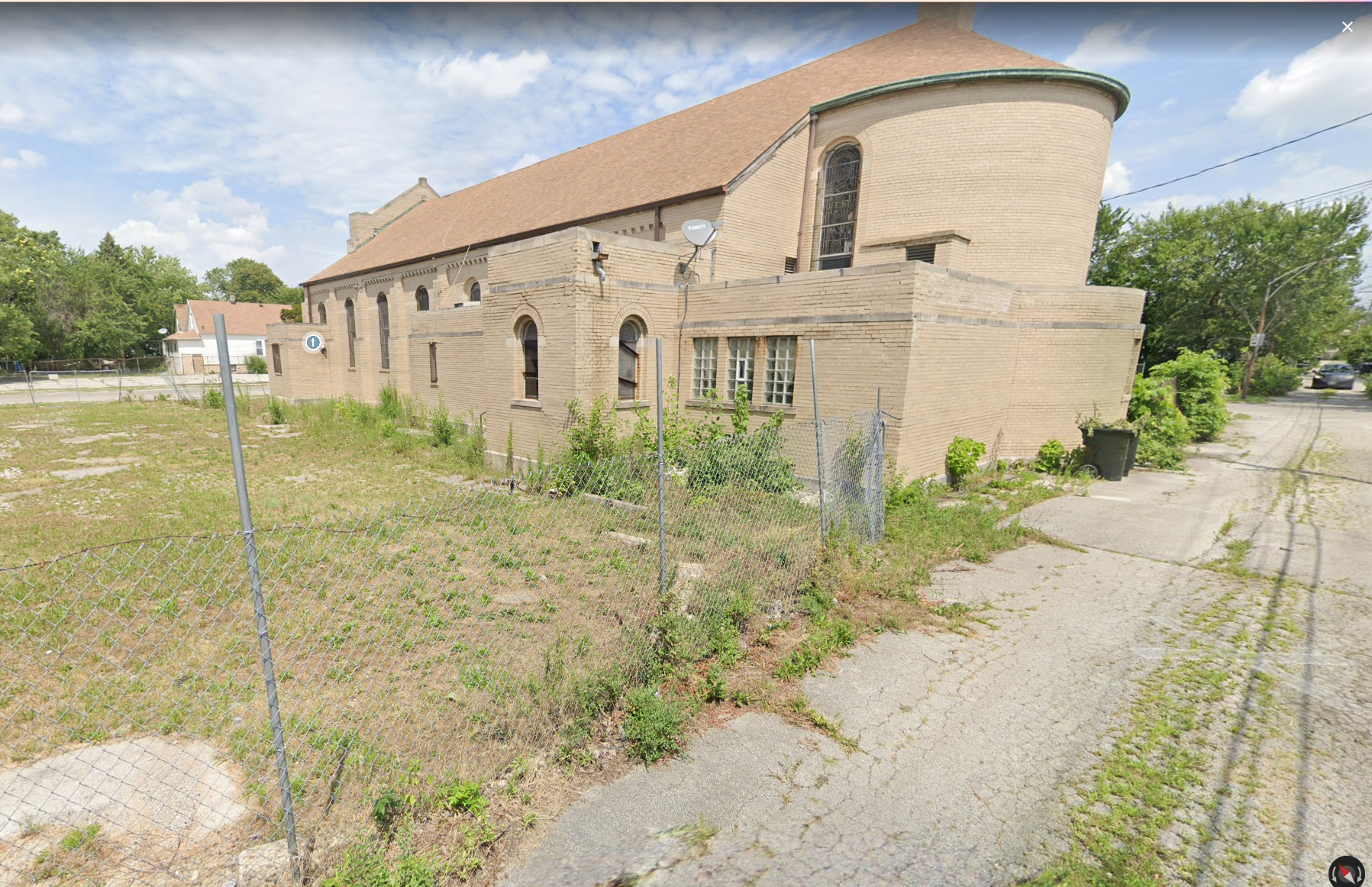 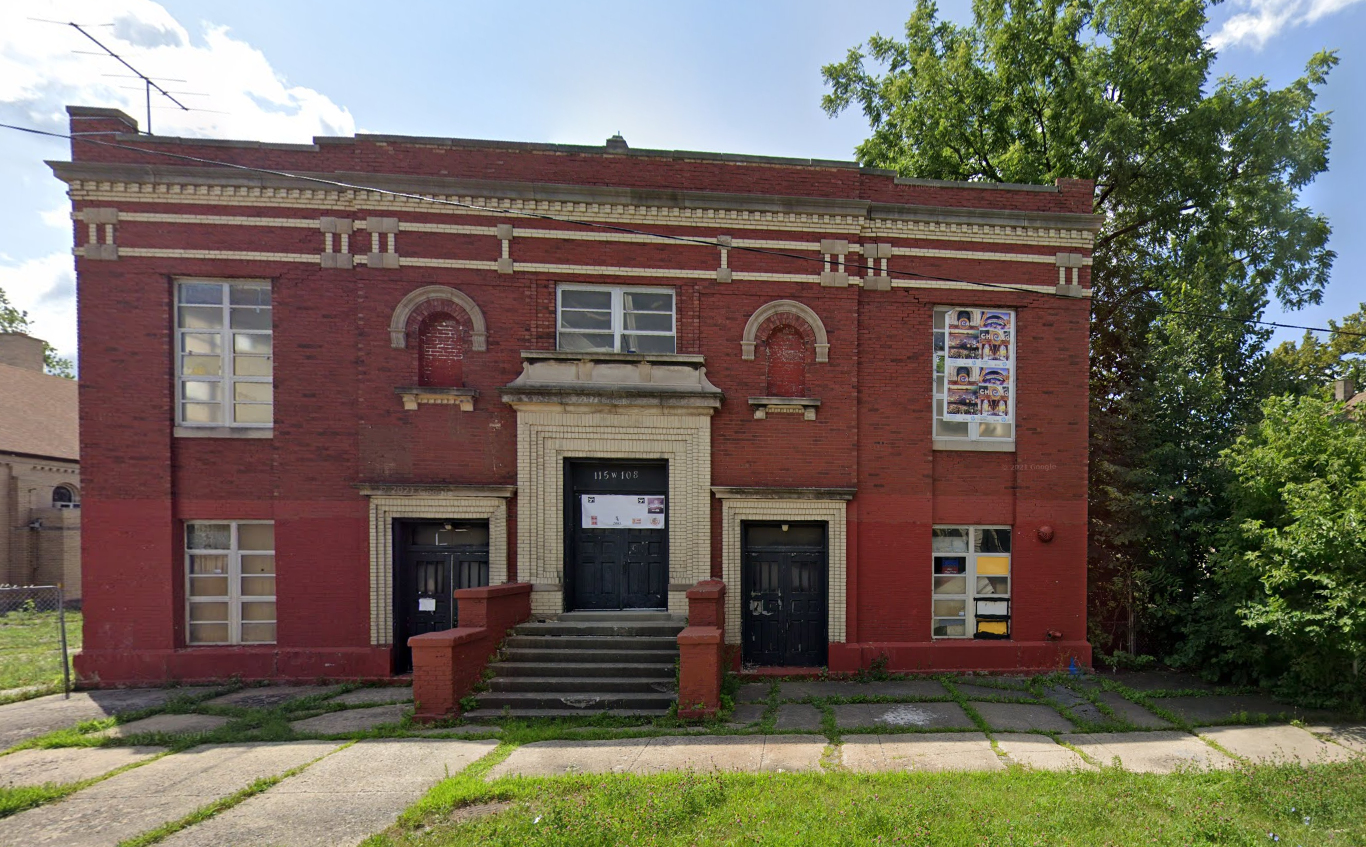 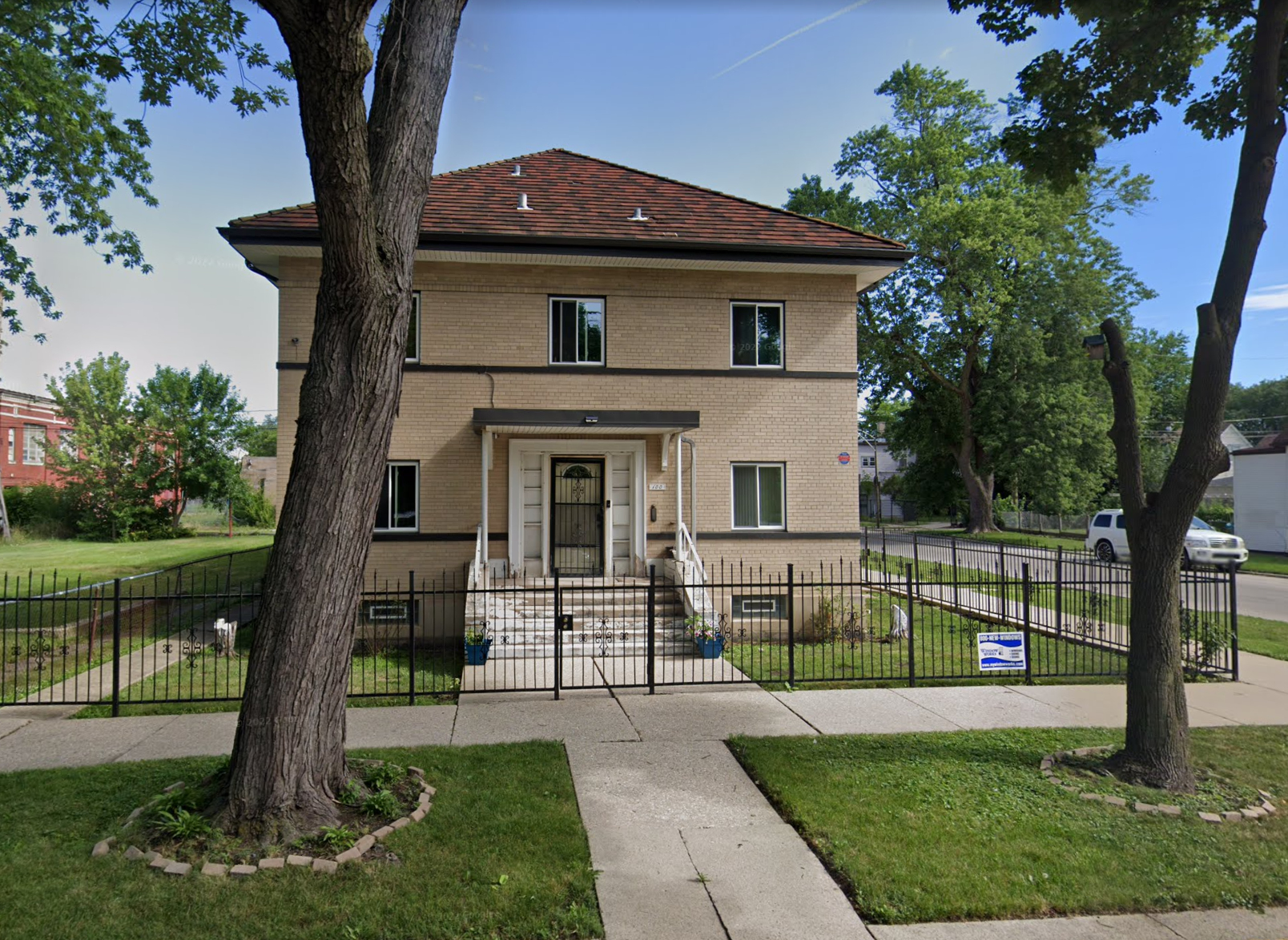 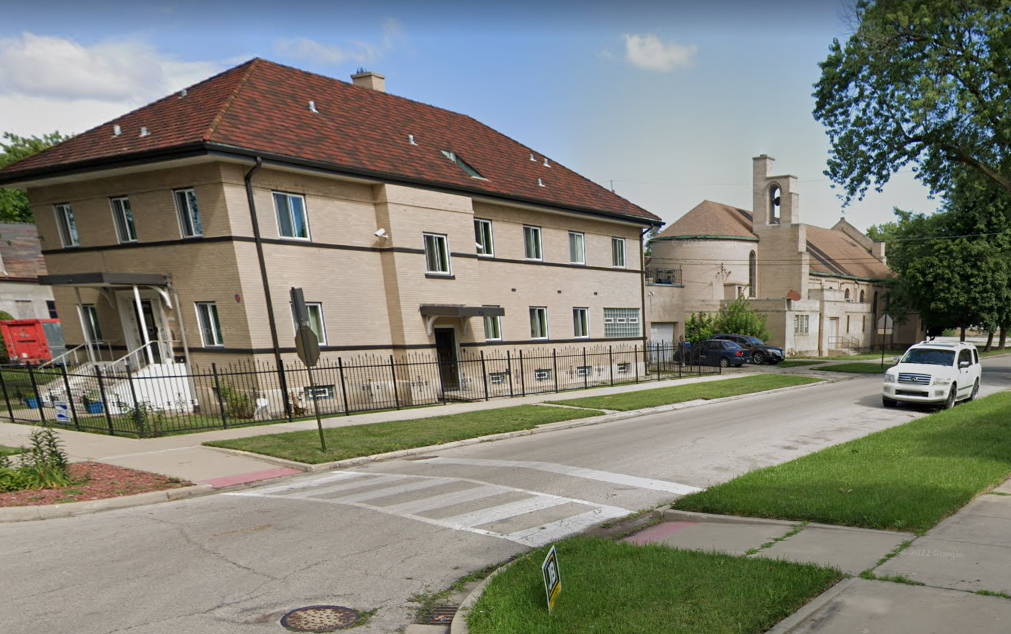 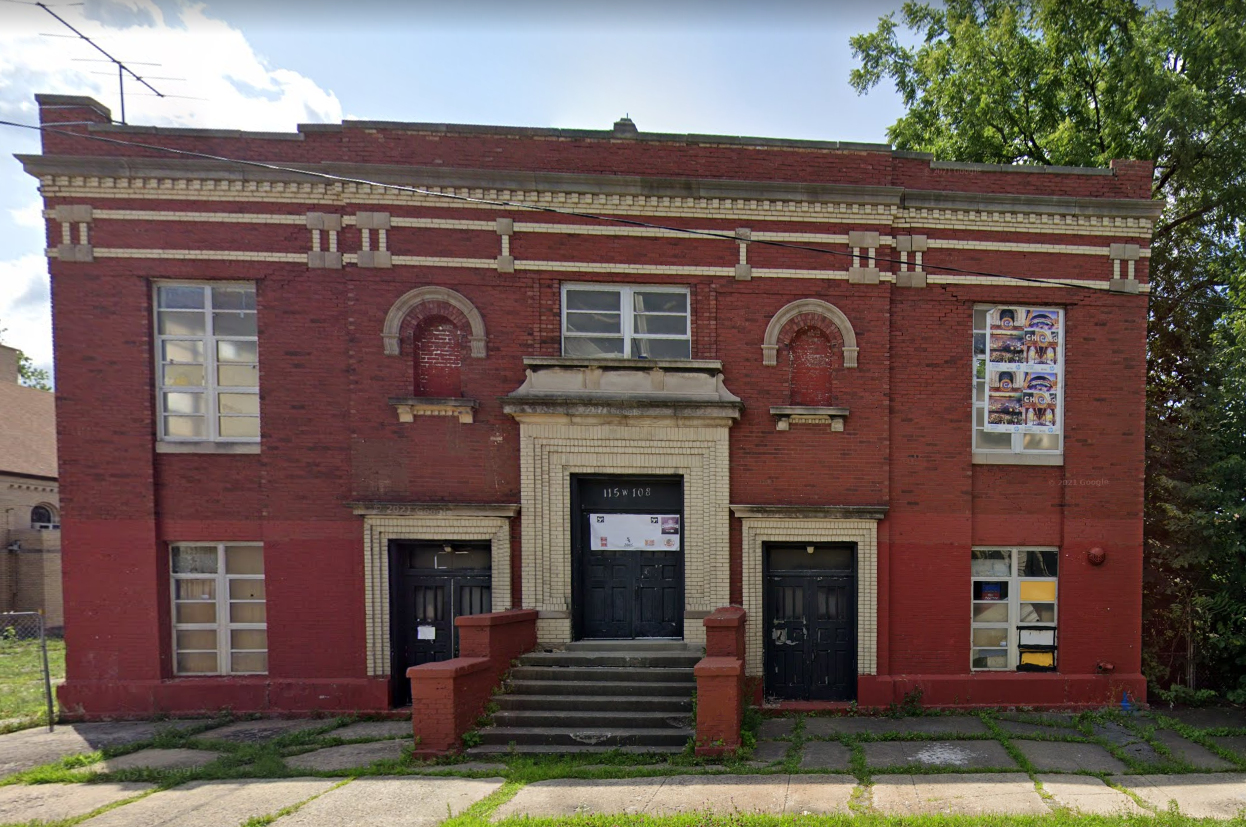