Geza Mihalotzy would be considered one of the very early Eastern Europeans to arrive in the United States and settle in the Chicago area.  Numerous articles imply that Mihalotzy and others like him were part of the Kossuth migration.

The 1848 Hungarian War of Independence was crushed by the military forces of Austria and Russia.  The Americans were supportive of the Hungarian cause, but only sent a ship (1851) to Turkey to transport military and other refugees, fleeing the region after the unsuccessful revolution, to England.  Lajos Kossuth, considered the leader of the fight for Hungarian independence was among them.  Kossuth himself arrived in the United States in 1851. (1)  Men who arrived during this time period, who were military veterans of the European revolutions of 1848, were nicknamed the “Forty Eighters”.  Some who also reached Chicago would volunteer for duty in the Union Army during the Civil War.

Most articles related to Geza Mihalotzy credit Geza as born in Hungary of Slovak parentage.  He and his father were soldiers in the Austrian military.

Ancestry has two records, one under Gera, the other under Carl, both Mihalorzy departing Le Havre and arriving at London on 7-22-1850 aboard the ship Venezuela.  He is listed as a refugee army captain. (2)  No confirmed record of his arrival in the United States has been found so far. 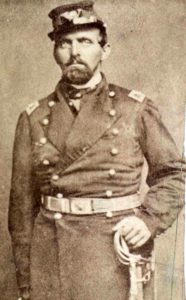 Geza married Hanna Westbrook in 1856 in Cook County.  A June 25, 1859 article in the Chicago Tribune indicates the Geza was already involved in supporting, in this article, Hungarians in opposition to the authority of Austria and support for Italy in the conflict taking place.  “The meeting of the Hungarians last night” – “A large number of Hungarian resident of this city met last night at 153 Randolph street, and formed themselves into an organization under the title of the Hungarian North-Western Central Committee…. G. Mihalotzy was elected Vice President…. The article concludes, with perhaps a hint of why Milhalotzy would become a soldier in our Civil War: “Resolved, that we are ready now and hereafter to support the cause of universal liberty against all enemies, and pledge ourselves to assist morally and physically the true cause of freedom wherever our services are required.” (3)

CSAGSI, in its Fall 1996 journal KORENY, published a very good summary of Geza Mihalotzy and the Slavonic Regiment of Chicago, later known as Lincoln Rifles.

“The winds of war reached the Czech settlement of Chicago with the result that they organized a Czech group for military training.  This was mainly the effort of a professional soldier of Slovak descent, Geza Mihaloczy.  The first meeting toward founding the unit was held October 16, 1860 from which time the members temporarily trained.  On February 22, 1861 their next meeting, the members elected Jan Slavik interim president and Jan Mendilk, Secretary.  They sent a request to the Governor of the State for a charter and the loan of armament.  Until this was accomplished, they trained thru drilling and marching.

(Note in February of 1861, Geza had mailed a letter to President Lincoln asking for permission to name the regiment forming in Chicago as the “Lincoln Riflemen of Slavonic Origin.”  President Lincoln replied with his approval. (5)

Temporary officers were elected and training was done in the hall of the saloon of Anton Mach at Canal and Randolph streets. The group numbered 44 members including Alois Uher, Geza Mihaloczy, Frank Novak, Prokop Hudek, Jan Slavik, Anton Mach and others.  Permission was obtained from President Lincoln to use the name Lincoln Rifles and members paid $0.25 monthly dues and were to get uniforms costing $3.50 each.  The regiment was called into service and was the first to leave Chicago for the field April 16, 1861.  Because other nationalities joined the regiment, “Slavonian” was dropped and they were called merely Lincoln Rifles.  At this time, only 12 Czechs remained with Geza Mihaloczy as Captain, Anton Kovacs and Filip Ferdinand, Lieutenants, and Alois Uher, Sergeant.  They were later absorbed into the 24th regiment of Illinois volunteers in 1861 and fought at Perryville, Murfreesboro, Chattanooga, Mission Ridge, Tunnel Hill and Buzzard’s Roost Gap where Mihaloczy was mortally wounded.  One member, Frank Kouba was taken prisoner and later died at the infamous prison camp at Andersonville, Georgia…………” (6)

Hanna Mihaloczy would travel to Tennessee, where husband Geza would die and be buried.  The Chicago Tribune announced his death.

“The Late Col. G. Mihalotzy”
“Chattanooga, March 13. The funeral of Col. G. Mihalotzy, 24th Illinois, took place today.  He was buried by his own request, in the National Cemetery.  Chaplain Lyle, 11th Ohio, pronounced an appropriate and impressive discourse.  Colonel Mihalotzy was, in all respects, a soldier, able, earnest, indefatigable and thoroughly penetrated with a sense of the justice of our cause.  He was a Hungarian by birth, and drew his sword for liberty in 1848, as a Captain in the Hungarian army.  His wife came to him a few days after he was wounded at Buzzard’s Roost, and attended his remains to the grave.”  (7)

This article appeared in the Chicago Tribune in 1901 – “Of Foreign Birth” – Geza Mihaltozy was born in Hungary, and after having received a military education served in the Austrian army.  In his youthful enthusiasm he took part in the revolutionary movement of 1848, and when the latter collapsed was compelled to flee to the United States.  He came to Chicago in 1850, and when the war broke out organized the Lincoln Rifles, one of the four companies which were the first to leave Chicago on April 21, 1861 to go to Cairo.  The entire body of troops was under the command of Colonel Swift, who had been appointed by Governor Yates.  Mihalotzy became Colonel of the Twenty Fourth Infantry, the well-known Hecker Regiment.  On Feb. 22, at Buzzard’s Roost, Ga., he was shot through his arm and chest, and he died a few weeks later at Chattanooga.  He was one of the first buried in the National Cemetery at Chattanooga.” (8)

(6) KORENY, journal of the Czech and Slovak Genealogy Society of Illinois, November 1996, Page 4, from a translation of Robert O. Uher of History of Czechs in Chicago (Dejiny cechu v. Chicagu) by Rudolph Bubenicek.