Assumption Church at 24th and California Blvd., the second Slovak parish in Chicago, was founded on August 15, 1903, to serve Slovak Catholics who lived north of St. Michael the Archangel Church at 48th and Robey Street (now Damen Avenue). Today, Assumption parish ministers to the needs of Slovak and Spanish-speaking Catholics who live north and west of the Cook County Criminal Courts complex at 26th and California Blvd.

In 1903, Rev. Alojz Kollar, temporary administrator of Assumption Church, celebrated Mass at the John Spry public school, 2400 South Marshall Blvd. The first resident pastor was Rev. Peter P. Klois, who celebrated Mass in nearby St. Ludmilla (Bohemian) Church at 24th and Albany Avenue. Following the completion of the brick church in the Polish parish of St. Casimir in 1905, the Slovaks attended Mass in the old frame church at 22nd (now Cermak Road) and Whipple Street.

For several years after the death of Father Klois in 1908, the Bohemian Benedictine Fathers from St. Procopius Church ministered to the Slovak Community. In 1913, Rev. Andrew Marecak was appointed second pastor of Assumption Church. By this time, the Slovaks had organized fraternal groups such as Jednota, the First Catholic Slovak Union, the Sokols, and the Ladies Slovak Catholic Association, which collected money for a school and church.

In 1914, Father Marecak bought property at the northwest corner of 24th and California Blvd., for a combination church and school. When the Chicago Board of Education decided to build Carter Harrison high school on that site, an arrangement was made whereby Assumption parish was given the southwest corner. A rectory was established at 2434 South California Blvd. 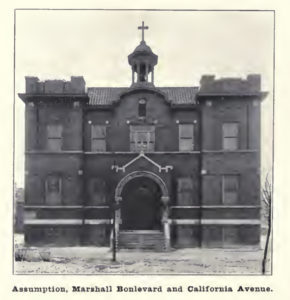 On July 12, 1914, the cornerstone of the new church and school building was laid. The two story brick structure included a parish hall in the basement, a church on the first floor, and four classrooms on the top floor. Archbishop James E. Quigley dedicated Assumption Church on November 8, 1914. That autumn, the Slovak Sisters of SS. Cyril and Methodius from Danville, Pennsylvania opened the parish school.

Father Marecak served the people of Assumption parish until 1916, when he was named pastor of St. John the Baptist Slovak Church in South Chicago. In February 1916, Rev. Louis Neuwirth began his work in the parish. Under his leadership, the shrine of Mary Assumed into Heaven was built in the parish garden.

In 1919, Father Neuwirth was named pastor of the Slovak parish of Sacred Heart at Huron Street and Oakley Blvd. His successor, Rev. Joseph F. Rondzik, had served as administrator of St. John the Baptist Slovak Church. When Father Rondzik arrived in Assumption parish in December 1919, he found a church heavily in debt. In order to halt foreclosure, he and his parishioners raised enough money to put the parish on a sound financial footing and to reopen the parish school, which was then placed in charge of the Sisters of St. Francis of Mary Immaculate from Joliet, Illinois.

Under Father Rondzik’s leadership, the fraternal and religious organizations were revived, and membership in the parish increased. The silver jubilee of Assumption parish was celebrated on August 19, 1928. Celebrant of the jubilee Mass was the pastor’s brother, Rev. John P. Rondzik, who was then pastor of the Slovak parish of St. Joseph on 17th Street.

Father Rondzik’s pastorate spanned 28 years. Following his death on November 7, 1947, Rev. Julius A. Chvojka was named pastor. Father Chvojka had been born in St. George, Slovakia in 1899, but he grew up in St. Boniface parish on the near northwest side of Chicago. 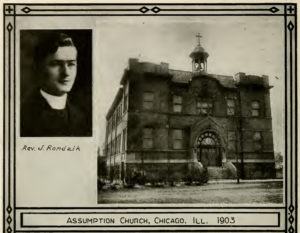 On March 2, 1950, a fire swept through the church hall. With the generous support of the people of Assumption parish, Father Chvojka was able to rebuild the church and pay off the parish debt. Samuel Cardinal Stritch presided at the golden jubilee of Assumption Church which was celebrated on September 13, 1953.

In June 1958, ground at 2831 West 24th Blvd., was broken for a new convent. The Sisters moved into their new two story structure—which had been designed by R.L. Ignelzi—from their quarters in the school building, 2817 West 24th Blvd.

On December 24, 1963, Father Chvojka was named a Domestic Prelate with the title Right Reverend Monsignor. Due to poor health, he retired in October 1967 and was named pastor emeritus. Msgr. Chvojka now resides in Westchester, Illinois.

Chicago Tribune October 7, 1992, Page 142
Monsignor Julius A. Chvojka, 93, pastor emeritus of Assumption Catholic Church on the West Side: was the second oldest priest in the Chicago archdiocese but the one with the longest years of service since ordination.

A resident of St. Patrick's in Naperville, he died there Saturday.

Father Chvokja, a native of St. George, Czechoslovakia, immigrated to the US with his family when he was a child.  He graduated from St. Boniface Grade School and St. Procopius High School and College in Lisle.

From 1947 to 1967, Father Chvojka served as pastor of Assumption Parish, when then was principally a Czechoslovakian American congregation.  Prior to that, he had been an assistant pastor at St. James, Maywood, and Sts. Cyril and Methodius, Joliet.  He also served in three other Chicago parishes: St. Nicholas, St. Joseph and St. Simon.....

Rev. John J. Spitkovsky, a former assistant at Assumption church, was named administrator in 1967. He has been pastor since July 17, 1974. With the Second Vatican Council came many changes which were reflected in the parish. Not only is Mass now celebrated in English, Slovak, and Spanish, but the church has been remodeled to facilitate the proper celebration of the new rites.

The diamond jubilee of Assumption parish was celebrated on September 27, 1978, and the Mass of Thanksgiving was offered in three languages. At the time of the 75th jubilee, parish membership numbered about 500 families. Approximately 150 children were enrolled in the parish school under the direction of the six Franciscan Sisters and one lay teacher. 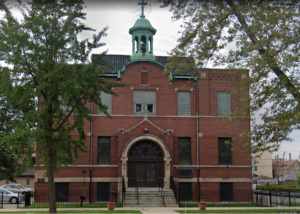 The Sisters at the Assumption school tutor Mexican and Puerto Rican children for whom English is a second language. In turn, Father Spitkovsky and associate pastor Ronald L Kondziolka have studied Spanish so that they may better serve the Spanish-speaking members of the congregation.

Assumption Church still enjoys a vigorous parochial life. Active parish organizations include a School Board, CCD, Golden Agers, Youth Group, and Holy Name Society. The parish also supports an English-speaking and a Spanish-speaking women’s group. Because many of the Spanish-speaking women in the parish hold jobs outside their homes, they meet on Sundays after Mass. Members of both women’s groups work together on parish events, especially the parish picnic and bazaar.

On Sundays, one Mass is celebrated in English, one in Spanish, and one in Slovak. Many of the Slovak members of Assumption church now reside in the western suburbs but return to the parish on Sundays. Full participation in the liturgy and reception of the sacraments are available to the Spanish Catholics in the congregation. Regina Lopez, the first permanent deacon to be ordained from the parish, is now a permanent deacon in Kansas City. In 1978, Natali Reyes was ordained a permanent deacon from Assumption Church.

THE B. V. M. SLOVAK CHURCH (2)
Up to the year 1903, there being no Roman Catholic Slovak Church in the territory bounded by Madison and Forty-fourth Streets, Lake
Michigan on the East and Lyons on the West, the Slovaks in that territory assembled for worship in a hall located on Twenty- second
and Troy Streets, -the first Mass being read there in June, 1903, by Rev. Alois Koller. The territory being too large for a single parish, it was divided into two, Ashland Avenue being the dividing line. Thus two Catholic Slovak churches were organized. The one West of Ashland Avenue was the Assumption of the B. V. M. ( Slovak) Church, which at present is located on the Northwest corner of Marshall Boulevard and Twenty-fourth Street. Rev. Peter Klois was appointed first pastor in the year, 1904. In the year of 1913, Rev. A. Marecek succeeded Rev. Peter Klois, who in the year 1914 commenced the erection of what at present is the rectory and combination building for Church, School and Sister's home. In March, 1916 , Rev. L. Neuwirth succeeded Rev. A. Marecak, and in December, 1919, the Rev. Joseph Randzik succeeded Rev. L. Neuwirth. In April, 1920, the Sisters of St. Francis from Joliet, Illinois, took charge of the school . There are now four Sisters andover 200 children in that school.

Assumption B. V. M. (Slovak)  Page 603
Chicago, 1903
Up to the year 1903, there being no Ro-man Catholic Slovak church in the territorj' between Madison and 44th Streets and from Lake Michigan on the east to Lyons on the west, the Slovaks in that teri'itory assembled in a hall located on 22nd and Troy Streets, the first Mass being read there in June, 1903, by Rev. Alois Kollar. The territory, however, being too large, it was divided into two, Ashland Avenue being the dividing line. Thus two Catholic Slovak churches were organized. The one west of Ashland Avenue was the Assumption of the B. V. M. (Slovak) Church, which at present is located on the southwest corner of Marshall Boulevard and 24th Street. Rev. Peter Klois was appointed first pastor in the year 1904. Temporarily the services were held at St. Casimir's Polish church on 22nd and Whipple Streets. In the year 1913 Rev. A. Marecak suceeded Rev. Peter Klois, who in the year1914 commenced the erection of what is at present the rectory and the combination building for ehiireh, hall, school and sisters' home. The rectory faces Marshall Boulevard and the combination building faces 24th Street. In between the two buildings there are still seven lots, on which, in the future, there may be a church erected. The school consists of four large rooms on the second floor. The first fioor constitutes the church. In the basement there is a hall and a stage. In the same year, 1914, the Sisters of SS. Cyril and ^lethodius, from Danville, Pa., took charge of the school and children. Through some misunderstanding this order of sisters left. In March, 1916, Rev. L. Neuwirth suc- ceeded Rev. A. Marecak. During his there was a special event, the blessing of a shrine to the B. V. M., in the year 1919. For some time there seemed to be some disagree- ment among the parishioners. In November, 1919, new order and peace was established. In the year 1920 Mr. Serafin Tomasak, Joseph Baran, Andrew Izo, were among the leading men who have taken special interest in the parish and placed it on a firm foundation.In December, 1919, Rev. Joseph F. Rondzik succeeded Rev. L. Neuwirth. Among the societies now in existence are
the Assumption of the B. V. B., St. Michael, St. Francis, Foresters; St. Joseph's Sokol of the t-atholic Slovak Union, Rosary Society of the Catholic Slovak Women's Union, St. Mary of Lourdes, Foresters; The National Slovak Society, St. Mary's Young Ladies' Sodality. In April, 1920, the Sisters of St. Francis fiom Joliet, 111., have taken charge of the school, to which school there belong 200
children. For the first time in the history of this parish the Sacrament of Confirmation has been administered to over a hundred, both young and old, by His Grace, Archbishop of Chicago, George W. Mundelein.

In 2019, the Archdiocese of Chicago consolidated three other Little Village churches into one parish. St. Roman Church and Assumption of the Blessed Virgin Mary Parish, 2434 S. California Ave., closed and merged with Our Lady of Tepeyac parish and school at 3047 W. Cermak Road.

The three parishes will merge on July 1, 2020, according to the announcement.

The leadership and parishioners of the new parish will discuss possibilities for its name within guidelines provided by the archdiocese.

Our Lady of Tepeyac will be designated the church for the new parish, where the pastor’s office and parish records will be kept.

Ministry activities, including Kolbe House and Taller de José, will continue on the Assumption B.V.M. campus. The pastor of the new parish, in consultation with parish leadership, will determine how frequently the united parish’s ministries will use the campus.

There are no changes to Our Lady of Tepeyac Elementary School or High School planed.